Trump-Gingrich Ticket Would Be A Riot Of Rhetoric

Jonah Goldberg
|
Posted: Jul 06, 2016 12:01 AM
Share   Tweet
The opinions expressed by columnists are their own and do not necessarily represent the views of Townhall.com. 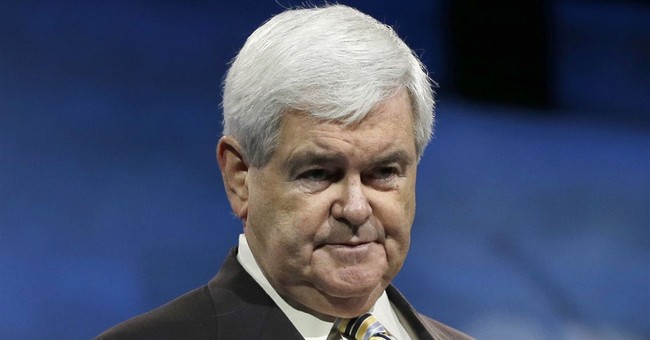 Load up on popcorn: The Republican ticket may be poised to go to 11. According to numerous reports, Donald Trump is considering Newt Gingrich as his running mate. And as traffic-baiters like to say on the Internet: You won't believe what happens next!

But first I should come clean. I like Gingrich. My wife worked for him for several years. Whatever his faults, the former House speaker -- and architect of the "Republican Revolution" in 1994 -- is a brilliant man with almost encyclopedic knowledge of political history and a grab bag of other topics as well. When John Boehner stepped down from the speakership last year, I proposed in this space that Gingrich serve as his temporary replacement.

I should also say that picking Gingrich could be a brilliant idea. Trump has said, admirably, that he wants someone who knows how Washington works. For good and for ill, Gingrich fits that bill. He understands the legislative process, knows everybody, and can navigate the vast ecosystem of lobbyists to his advantage. (Gingrich earned nearly $1.8 million from Freddie Mac serving as a consulting "historian.") Gingrich may have mastered the language of taking on "the Washington elites," but being one has been his job description for nearly 30 years.

Over roughly the same period, I have to say, Gingrich foreshadowed Trumpism. In the 1990s, he used talk radio much the way Trump has exploited social media to get his message past the gatekeepers. In 2012, Gingrich leveraged the debates to dominate the news cycle like a force of nature, attacking -- often with devastating efficacy -- the presumptions and arrogance of the media.

Trump has made it clear that he's more interested in winning over disaffected Democrats than reluctant conservatives. Gingrich beat him to the punch there, too. Gingrich masterminded much of the GOP's attempt to push white working-class Democrats into the Republican column. And a few years ago, he was ensorcelled by his own idea of a new "tripartisan" movement, which led him to team up for various projects with Nancy Pelosi and Al Sharpton, among others.

Bill Clinton tapped Al Gore in 1992 to reinforce -- rather than offset -- his brand as a next-generation Southern moderate. (This was before Gore became a Silicon Valley cliche.) In many respects, a Trump-Gingrich ticket would also count as a "double-down" move (and not just in the sense that they've totaled six wives between them) -- except that while Trump can't offer much beyond the bumper sticker "Make America Great Again," Gingrich has written books on "Renewing American Civilization." Gingrich could complement Trump; he could be like the walking explanatory footnote to Trump's every outburst.

Next to forecasting that bears will continue to use our national woodlands as latrines, the easiest prediction in the world to make is that Trump will say some outlandish things in the months to come. Gingrich's job will be to explain why the outlandish isn't outlandish.

For argument's sake, let's say Trump announces that we should abolish the question mark. Gingrich will then appear on "Meet the Press" to defend his running mate, as any VP candidate must.

"Frankly, Chuck," he'll begin. (Gingrich likes to begin his sentences with "Frankly.") And then we will get a very frank master's course on how, frankly, in the age of emojis, the question mark is a waste of vital national resources. Moreover, he will explain, frankly, that the mainstream media's scorn for this idea just shows how out of touch they are with the concerns of everyday Americans.

Then, on Monday, Trump will say, "Question marks? I love question marks. I meant we should abolish semicolons." And Gingrich will be there, standing alone, atop a rhetorical cloud castle of his own devising, holding the bag.

It gets better. Gingrich suffers from an intellectual version of Trump's political Tourette syndrome. The difference is that Gingrich can almost always offer a plausible -- or seemingly plausible -- defense for every crazy idea, from moon colonies and mirrors in space (to create 24 hours of electricity-free daylight) to claiming that a woman who drowned her kids proved that people needed to vote Republican.

While I'm sure the presumptive GOP nominee would love to see a Trump Tower on the moon, I have a sneaking suspicion he will have a tougher time explaining his running mate's rhetorical excesses than the other way around.