Garland Nod The Latest Move In Democrats' Game of Thrones

Jonah Goldberg
|
Posted: Mar 18, 2016 12:01 AM
Share   Tweet
The opinions expressed by columnists are their own and do not necessarily represent the views of Townhall.com. 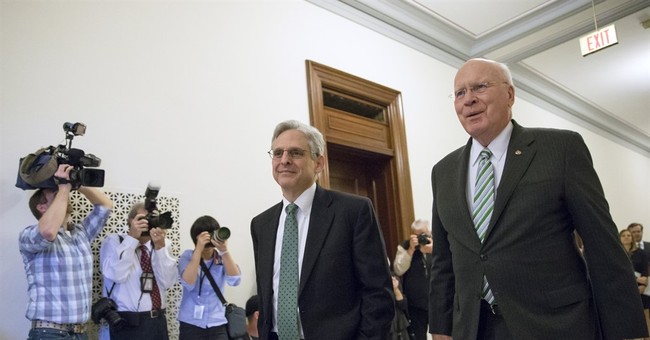 Given the rancor and turmoil inside the GOP these days, even a bitter, partisan, hammer-and-tongs battle to the death over a Supreme Court justice seems almost quaint by comparison.

The Republican-controlled Senate, which is empowered by the Constitution to offer both advice and consent to the president's judicial nominees, has offered the following advice: Not now and not you. Antonin Scalia's death left a court vacancy larger than a mere one-ninth of the voters on the bench. Replacing Scalia with a reliably liberal justice would upend the court's ideological balance, to an unacceptable degree for the GOP.

All the Constitution says is that there has to be a Supreme Court. (Even the existence of lower federal courts is entirely optional). There's nothing holy, never mind constitutionally sacrosanct about the number nine. Congress could decide tomorrow to make the Supreme Court a body of 72 people picked randomly from the phonebook (so long as the president was the one doing the random picking and the Congress approved them).

This means that all of the posturing, sanctimony and incessant charges of hypocrisy aren't bugs of the nominating process, they're features. When then-senator, and chairman of the judiciary committee, Joe Biden insisted that George H.W. Bush refrain from making any Supreme Court justices during an election year, he was making a purely political argument. And just because it was a political argument didn't make it any less reasonable. Likewise, when Sen. Mitch McConnell invokes the "Biden Rule" he's making a political argument, and it's no less reasonable coming out of his mouth than it was coming out of Biden's.

Such partisan squabbling can be exhausting for anyone paying attention, but such is the nature of the beast. Everyone is guilty of partisanship, even those, like President Obama, pretending to be above partisanship. This is the same Barack Obama who filibustered a Supreme Court nominee when he was a senator.

The far more important issue is the fact that Supreme Court appointments are so important in the first place. And on this point blame should not be allotted equally to all parties.

Leave aside the fact that the partisan wars over judicial appointments began with the "borking" of Judge Robert Bork (led by none other than Joe Biden), the reason these fights are so ugly is because the stakes are so high. We've invested in the Supreme Court powers never imagined by the framers. And when I say "we" I mostly mean progressives. The growth of the administrative state and the encroachment of federal law into every nook and cranny of local life has been a century-long project of the left.

It should be no surprise that when we bequeath monarchical powers to nine -- or eight -- lawyers, the battle for succession to one of the nine thrones will be ugly. Indeed, it's surprising it's not uglier. We spend billions of dollars trying to pick a president of the United States, and in many respects the Supreme Court is now more powerful than the presidency. It's certainly far, far, far less democratic. We appoint justices for life and many of their decisions cannot be overturned by the Congress, or the people, short of a constitutional convention.

The left, which pays a lot of lip-service to the "people power" and democratic action, has given us these black-robed kings and queens. They shouldn't be surprised when the game of thrones gets ugly. It's their game.