Jonah Goldberg
|
Posted: Jan 01, 2016 12:01 AM
Share   Tweet
The opinions expressed by columnists are their own and do not necessarily represent the views of Townhall.com. 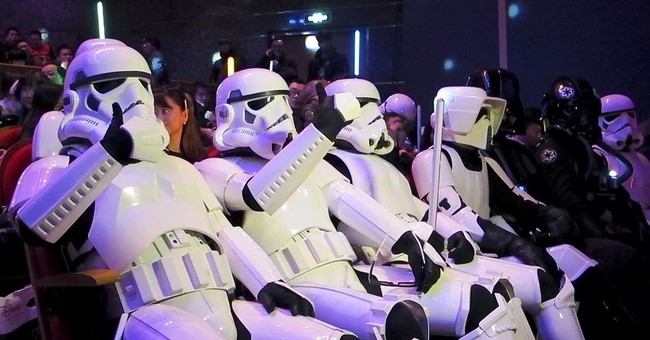 If you're opposed to slavery, is it OK to still like "Star Wars"?

It's a question I've been wrestling with ever since Jonathan Last, a friend and writer at the Weekly Standard, pointed out to me that the "droids" in the "Star Wars" movies are slaves. Unlike a lot of the ridiculous "Star Wars" revisionism in recent years -- much of it ushered in by Last himself when he argued that Darth Vader & Co. are in fact the good guys -- Last's case that droids are slaves strikes me as nearly incontrovertible. I'd hoped to be persuaded otherwise when I went to see the "The Force Awakens." No such luck.

C-3P0 and R2-D2, as well as newcomer BB-8, are all sentient beings. They'd not only ace the Turing test for artificial intelligence, they'd pass the Oprah Winfrey test for emotional intelligence. (I'm just assuming one exists.) They feel joy and grief and exhibit loyalty, too. Loyalty, that is, to their masters. That's right, they call them "masters."

It's possible that droids are like shmoos, the fictional creatures imagined by Al Capp in Li'l Abner. Shmoos only aim to please. They want no money, they don't need to eat, and they are more than happy to be eaten. (If you look at one with hungry intent, it will spontaneously roast itself.)

The problem is that there is no evidence the droids are shmoo-like in any way. In the first movie, when the slave-trading Jawas capture R2-D2 and C-3PO, they have to restrain the fugitive droids, lest they run away. Droids fear "deactivation" and seem to feel pain as well. They're artificial people, and they're real slaves.

If you're not convinced, you can read Last's full indictment at the Washington Free Beacon (http://freebeacon.com/culture/are-droids-slaves/).

But since I'm convinced, two questions come to mind. First: What am I supposed to think about all this? We'll come back to that.

And, second, why didn't anyone notice until now?

After all, it's not like there aren't a lot of people out there desperate to take offense at just about anything slavery-related. You might think the question answers itself, since droids aren't people. Yeah, except the use of "master" and "slave" to describe hard drives has been controversial for over a decade. Los Angeles County banned the terminology in 2003. Yale University is reportedly doing away with the term "master" for some administrators because of its supposedly troubling connotations.

A more likely answer is that the self-appointed censors missed the widespread slavery in "Star Wars" because they tend to think that slavery was a uniquely American institution. It wasn't. Slavery was ubiquitous and constant throughout human history until the 19th century (and it survives in some corners of the world today). What was unique about American slavery was American hypocrisy. A country founded on human equality and inalienable rights should have been the last place where humans could be held as property.

Droid slavery might have looked much more familiar to citizens of ancient Rome, where the value of slave loyalty was celebrated for centuries. R2-D2 is a very loyal slave. C-3PO is a bit mouthy.

Through an American prism, Turkish slavery seems as otherworldly as "Star Wars" slavery. But the similarities are striking. The Turks relied on slaves to manage their civil service and fight their wars. You could even make quite a career as a slave. Sokollu Mehmed Pasha was a slave and the de facto ruler of the Ottoman Empire for 15 years.

As for what to think about the slavery in "Star Wars," I'm still struggling. Maybe when humans design sentient computers, there's nothing wrong with programming them to be eternally loyal. Maybe.

That makes me think about how our understanding of the past is constantly changing, not because we have new facts about what happened yesterday, but because we have new understanding about who we are today. Some old movies are hard to watch because of the ways blacks or Native Americans or gays are depicted. My daughter loves "I Love Lucy" and "Little House on the Prairie," but sometimes she asks very good and pointed questions about why girls were expected to stay at home. People saw things differently then, I explain.

If there comes a day when we make sentient and emotionally complex androids, we may have to have similar conversations with them about the "Star Wars" franchise. Best not to show them "Blade Runner" at all.