To Replace Boehner, Why Not Newt Gingrich for Speaker? 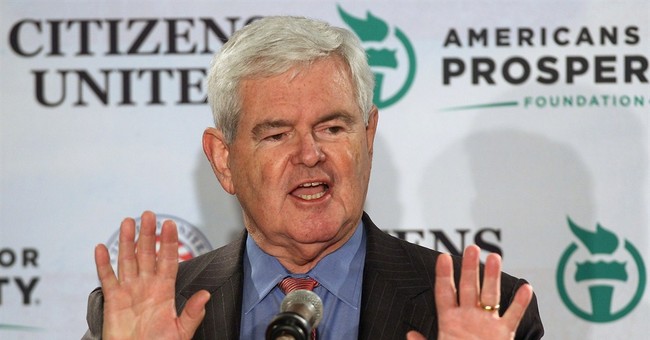 Almost exactly seven years ago, House Speaker John Boehner said of the Wall Street bailout bill, "I think this thing is a crap sandwich" -- but he'd vote for it anyway. I remarked at the time, "It's crap sandwiches for as far as the eye can see" -- and I was right.

Boehner finally had his fill of the meal, opting to push away from the table, as it were. On Friday, he announced he'll be resigning the speakership and his seat.

Boehner has become a lightning rod for a large segment of the base that is simply fed up with GOP failures, both real and imagined, in the age of Obama.

Some say he quit because he was going to be fired. People on the Hill tell me that's not necessarily so. But what's clear is that going through with a no-confidence vote would have put many House Republicans in a terrible spot. Boehner might have even needed Democratic votes to help him keep his job. A speaker who cannot earn the support of a majority of his own caucus would be a political eunuch.

Was all this fair to Boehner? I like Boehner personally, and I think he got more grief than he deserved, which is different than saying he didn't deserve any of the grief he got. But, ultimately, fair's got nothing to do with it.

When the leader becomes an impediment to his members, it's time for him -- or her -- to go. The question now is what to do about it.

I like McCarthy. Heck, everyone likes McCarthy. A former whip, he's the consummate vote-wrangler, which is why he's so well-positioned.

Many conservatives outside of Congress want to grade replacement candidates on an ideological spectrum, and on that metric, McCarthy probably comes up short. But many conservatives inside Congress suspect that while McCarthy might be a less conservative leader, he would be a much more responsive follower.

The other potential replacements -- Jim Jordan (R-Ohio), Jeb Hensarling (R-Texas) and Daniel Webster (R-Fla.) -- are solid conservatives with a much deeper grasp of policy than McCarthy. The irony is that they may not get the spot precisely because they have more fully formed legislative and ideological priorities of their own. The base wants the speaker to follow their lead.

The real reason no one challenged Boehner sooner is that the speakership is a lousy, thankless job, at least while President Obama continues to treat Congress with contempt. The speaker sits between competing firing squads.

In the realm of the plausible, I'd probably pick Hensarling. Fortunately, as a columnist, I don't have to stay within the guardrails of the plausible. So here's an idea.

There is nothing in the Constitution that says the speaker must be an elected member of the House. The House could pick anyone from Carrot Top to Oprah as speaker. Those options don't make any sense (though Oprah would probably place some wonderful gifts under members' seats). But there is one nonmember who might bring the skills the moment requires: Newt Gingrich.

Gingrich was the architect of the "Contract with America." He led Republicans to the first congressional majority in 40 years. His speakership was not without faults, but Gingrich has matured. At 72, he is literally an elder statesman of the party and still one of its most gifted communicators.

He also happened to be, for a while, the first choice for president in 2012 among many of the same people who wanted Boehner's head. He knows how backbench firebrands think, because he was one himself. More important, he's got an encyclopedic grasp of the institution's power and limitations.

Since no one seems to have thought about what to do after getting rid of Boehner, Gingrich may be the ideal placeholder until Congress gets its act together. He poses no long-term threat to anyone's ambitions, and in the short term he could be a unifying figure.

Gingrich always believed he had another rendezvous with destiny. Tanned, rested and ready, he may just be the guy to get that sandwich off the cafeteria menu.