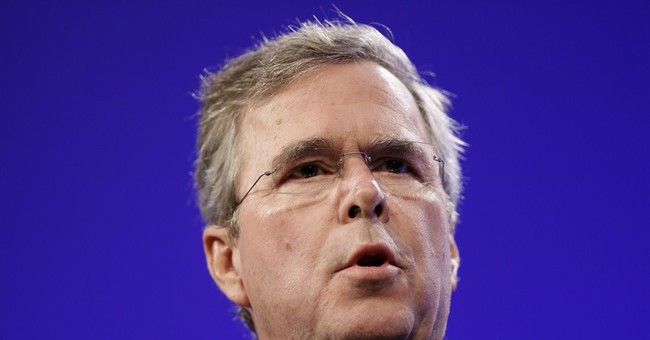 By now everyone has had their say about Jeb Bush's terrible, horrible, no good, very bad week. The consensus is that Bush misheard Megyn Kelly's "knowing what we know now" question about the Iraq war. I'm not convinced.

Politicians routinely answer the question they wish they were asked rather than the question they were actually asked. Indeed, those are the only kinds of questions some politicians -- particularly ones with the last name Clinton -- ever answer. The question Fox News' Kelly asked is the tougher one, at least for Bush, so perhaps he opted to answer in a way that let him take a shot at Hillary Clinton, who also supported the war?

But it doesn't matter. Bush should have murder-boarded every possible variant of that question. His team should have run drills on it, as if he were prepping for a presidential debate. And, he should have given a speech specifically about the Iraq war months ago to inoculate himself against all of this.

In other words, the disturbing thing about his response and the awkward effort to clean it up is that it was necessary at all.

With the possible exception of the Adamses, there's no family in American history with more institutional knowledge about how to run for president. And of the immediate Bush clan, almost everybody agrees that Jeb is the savviest.

Which is why it's just so interesting that he constantly seems out of sync and off tempo -- with his own party and with the country. My National Review colleague, Rich Lowry, argues that Bush is a "pre-Obama" conservative -- pre-tea party -- in a post-Obama GOP. That sounds right to me. But maybe Bush simply knows something the rest of us don't?

According to a recent Washington Post account, his chief strategist, Mike Murphy, sought to reassure backers who were "beginning to worry whether [Bush] can excite Republicans in the same way that many of his younger rivals are already doing." Murphy "insisted that the Bush team is patiently playing a long game, one that will not be upended by the actions of his rivals."

Bush adviser Vin Weber told the Post: "We have a plan, and we're on track to achieve all of our goals."

That sounds great, but wasn't the Bush plan to have a lot fewer rivals to begin with? Earlier this year, some Bush donors told me they would amass such a big war chest that they'd scare most of the field out of the race.

In January, Bloomberg Politics' Michael Bender reported on the unofficial Bush campaign's "shock-and-awe" fundraising scheme to "intimidate" rivals out of the race, which is much like George W. Bush's approach in 1999. W's boffo numbers, Bender wrote, had sent a signal to "Elizabeth Dole, Dan Quayle, John Kasich and Lamar Alexander to end their campaigns swiftly or decide not to start one."

Despite raising more money than his brother did, the Jeb Bush campaign has only managed to scare off Mitt Romney.

Meanwhile, the GOP primary season looks a bit like Caddie Day at the Bushwood Country Club in the movie "Caddyshack" -- just about everyone is jumping in the pool.

Bush is understandably reluctant to play armchair general refighting the last war when it comes to Iraq. Maybe he should be equally reluctant to rerun the last campaign, too?

People who've talked to Bush say he's either reluctant or sincerely uninterested in talking about the race in conventional "who's up, who's down?" terms. Bush has publicly said that he wants to run "joyfully." That's a great -- and smart -- attitude. The only thing lacking is much evidence that he's enjoying himself. Mike Huckabee's having a grand time, and it shows. Bush often sounds like he feels inconvenienced.

On the stump, Bush has taken to complaining that Hillary Clinton is held to a lower standard because she's not expected to answer tough questions. His aides press the point even more forcefully.

They're right, of course. But this highlights a problem Bush needs to grapple with: Most Democrats think Clinton is entitled to the nomination; Republicans don't feel the same way about him.