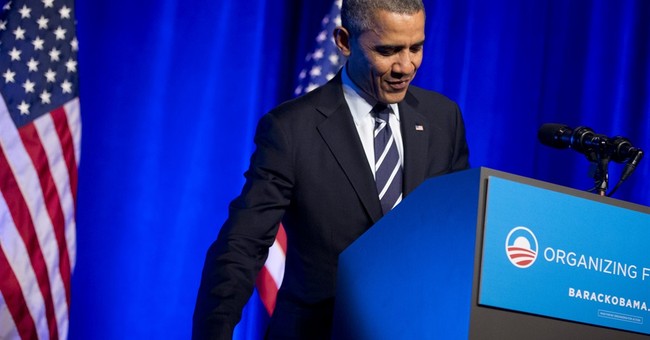 Many of the president's supporters are in barely concealed panic over the fact that he didn't tell the truth when he was selling the Affordable Care Act.

This was, by any common-sense measure, a lie. It was a lie because President Obama understood that one of the central aims of the Affordable Care Act was to squeeze out the individual insurance market (and the small business market), forcing those Americans on to the HealthCare.gov exchanges. You can't force people out of one insurance product and into another while simultaneously letting them keep their plan. That'd be like a car salesman promising a great price on a new vehicle if you trade in your old one, while still promising you can keep your old car.

This simple fact of logic is causing many liberals to flee for what they believe are rhetorical safe harbors.

The first refuge is that he was simply being "unclear." The "White House could have been clearer in laying the groundwork for this political argument," writes The Washington Post's Greg Sargent. House Minority Whip Steny Hoyer, D-Md., says, "I think we should have been more precise." The New York Times' Editorial Board says, "Obama clearly misspoke when he said that."

Obama wasn't telling the truth unclearly; he was telling a falsehood very clearly. When he said "no matter what," it even left the impression that, if in some unforeseen way the law did cause people to lose their plan, he would remedy the situation. (If that were so, the White House would support congressional efforts to let people keep their plans.) The "period" in "you'll be able to keep your health care plan, period" means no ifs ands or buts. Now we are getting a barrage of "buts."

On Monday night the president grasped for a rhetorical do-over. "Now, if you had one of these plans before the Affordable Care Act came into law and you really liked that plan, what we said was you can keep it if it hasn't changed since the law passed." Except for the fact that's entirely untrue, it's pretty persuasive.

The most popular alibi is, "Yes, people are losing their plans, but they're getting better ones." The New York Times and the president have embraced this line. But even that isn't necessarily true.

Some people already know they don't think the new plans are better. In many cases, they're more expensive with higher deductibles and stiffer co-pays. Better for the consumer and better for bureaucrats or progressive social planners don't always mean the same thing.

Even if turns out to be true, as Obama insisted in Boston last week, that the majority of Americans will get better coverage than they had before, that's no rebuttal to the charge the president lied.

If a landlord promises you can keep your dog when you move into an apartment, but then after you sign the lease he takes your dog and replaces it with a stuffed one, he wasn't telling you the truth. The landlord's view that the new dog is better ("No mess! No noise!") is utterly irrelevant to the question of whether the landlord lied -- and it doesn't make you a fool for preferring your old dog, either.

It's good that liberal supporters of the law admit that what the president said wasn't true, even if they can't bring themselves to call the president a liar. But they might want to think a bit about the standard they are establishing.

Do they really want to say it's OK for presidents to lie if it is for a good cause? Surely, some presidential lies are painfully necessary. (Franklin Roosevelt lied quite a bit in the lead up to World War II.) But Obama's lies (including his promises that the Affordable Care Act would "bend the cost curve" down and that the average family would save $2,500 a year in health care costs) were in the service of partisan legislation that has never been popular.

Many liberals forgive Obama for his noble lie. I doubt they'd be as forgiving if a Republican president similarly lied to impose an unpopular partisan agenda.