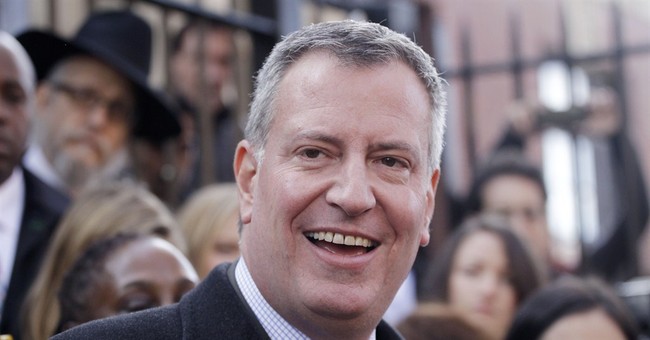 The new mayor of New York City is a Red Sox fan. According to the rules of the New York I grew up in, I'd expect to see the Hudson turn into a river of blood and Zabar's to close due to a locust infestation before that happened.

But if De Blasio's remarkable rise proves anything, it's that the rules can change. A liberal's crazy liberal, De Blasio still waxes nostalgic about the noble struggle of the Nicaraguan Sandinistas, for whom he raised money in the 1980s. He violated the ban on travel to Cuba for his honeymoon with his formerly gay wife, and he often talks as if he's handing out literature in Union Square for the former left-wing New Party, for which he used to work.

For conservative pundits, he's the Austin Powers of pre-Rudolph Giuliani urban liberalism, a near perfect throwback thawed out for our amusement. Social justice is his bag, baby.

But for those of us born and raised in pre-Giuliani New York, he can also conjure images of Charles Bronson in "Death Wish," the gritty vigilante flick that symbolized the city in that era.

Vincent Cannato, a historian at the University of Massachusetts, wrote the definitive book on John Lindsay, the mayor of New York from 1966 to 1973. Cannato's book "The Ungovernable City: John Lindsay and His Struggle to Save New York," tells the story of liberalism's now-forgotten golden boy. Charming, improbably handsome, resolutely liberal and Republican (until he switched parties), Lindsay had the dubious distinction of overseeing much of New York's horrific decline into legal, fiscal, racial and moral chaos.

Lindsay's defenders are legion in New York. In their minds, everything was going great and then, suddenly, when Lindsay left office, the place went off a cliff overnight. Cannato says that whenever he appears at an event to discuss his book, the Lindsayites swarm to defend their hero. One of their primary talking points is the fact that Lindsay fulfilled his vow to "throw open the city to producers from Hollywood," ushering in a renaissance in New York filmmaking.

And it's true. But just look at the movies born of Lindsay's efforts: "Taxi Driver," "The French Connection," "The Prisoner of Second Avenue," "Panic in Needle Park" and other films depicting a rotting Big Apple -- a "voluptuous enemy" with "the stench of Hell," to borrow a phrase from Pauline Kael's review of "Taxi Driver."

Hollywood may have exaggerated the extent of New York's Stygian gloom, but you can only exaggerate the truth. And anyone who lived in New York City in the 1970s and 1980s can recognize that while "Death Wish" may have been a caricature, like any good caricature it captured the likeness better than the subject would have liked. When I was a kid, street crime was a given, rationalized by many liberals as the price one had to pay to live in such a wonderful metropolis.

De Blasio comes from a wing of liberalism that looks nostalgically on the days when New Yorkers were immeasurably worse off but urban liberals had more confidence. He has promised to get rid of the "stop-and-frisk" policies that helped make New York City the safest large city in the world. (There was an average of more than six murders a day in 1990. This year, the city is on target to average less than one.)

He talks as if all of New York's problems stem from the fact the rich find it too hospitable. This despite the fact that city spending went up nearly 50 percent on Michael Bloomberg's watch alone, fueled by ever-higher tax burdens on the city's wealthy (the top 1 percent account for 43 percent of city revenues).

Maybe a De Blasio mayoralty will be constrained by the successes of the last 20 years and the expectations of New Yorkers. But there's an irony here. A city with a better memory would still surely be liberal, but it would not be defrosting someone like De Blasio. He would be impossible without the successes of the Giuliani administration (and Bloomberg's willingness to sustain them), just as Giuliani would have been impossible without the accumulated failures of his predecessors.

De Blasio's success proves the one eternal rule of the game in politics: Victory is never permanent, nor is failure.