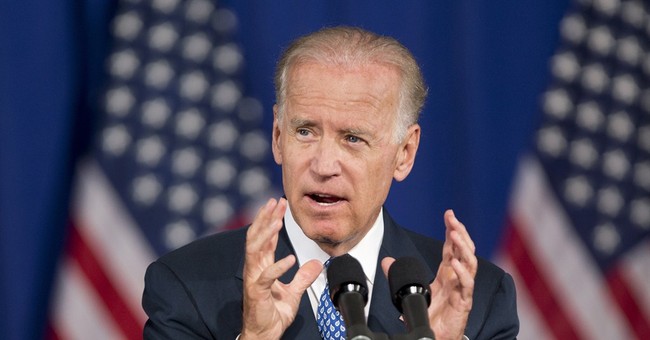 Not counting rumors that Anthony Weiner's marriage has hit a rocky patch, it may be the worst-kept secret in politics: Joe Biden wants to be president.

On Monday, the Wall Street Journal reported that the vice president's inner circle is swabbing the decks, battening down the hatches and hoisting the mainsails for USS Bidenpalooza 2016. "Everyone involved in his world," a Democratic official told the Journal, "is engaged in taking all the steps that make sense to prepare for a run, if he does run." Biden's people are apparently willing to go for it even if the allegedly inevitable nominee, Hillary Clinton, decides to run.

Why is this happening?

It's a difficult question to boil down to a single variable, given the swirling maelstrom of egos, agendas and issues at play. Still, one answer does seem to cover the waterfront: because ours is a just and generous God. From my admittedly selfish perspective, a Biden candidacy would be great for everybody -- and by everybody I mean people who would like to see the Democratic Party descend into a chaotic food fight.

Indeed, while most of the punditocracy is obsessed with turning the mostly trivial sniping between New Jersey Gov. Chris Christie and Sen. Rand Paul (R-Ky.) into proof of a bloody civil war on the right, the Democrats are poised to descend into a family squabble of historic proportions that will amount to a riveting political reality show.

The important distinction between the GOP's internal disagreements and the Democrats' is that the Republicans are divided over issues and philosophy. Where should we make trade-offs between national security and domestic liberty? What is the proper role of government in domestic affairs? How do we cut the Gordian knot of immigration?

Almost all of the Democratic Party's disagreements revolve around tactics, personalities, loyalties and aesthetics rather than principles. (The big exception is the fight over NSA domestic surveillance, which divides both parties.) And that means things will get personal -- fast.

Ask a loyalist why Clinton should be the nominee or president, and the response invariably boils down to some claim that she "deserves" it: She's a woman! She put up with so much! It's her turn!

The case for Biden also often boils down to entitlement: He's been around a long time; he's the vice president so it's his turn; what else are you gonna do with him?

Both Clinton and Biden would run as Obama loyalists. That'll be great with the base, particularly the all-important African-American bloc. But it assumes that Obama's marginal popularity extends to a general election, where independents matter. Republicans will be giddy to watch Clinton and Biden duke it out over who is the more deserving heir to stagnating wages, the Obamacare debacle and waning global prestige.

But here's the really fun part: Biden has a good shot at playing the spoiler. Because there's a fact that Biden's detractors and Clinton's groupies are loath to acknowledge: Biden is the much better politician. It's not that Biden is a fantastic politician; it's that Clinton is a very boring one.

But that's not all. Vice presidents have a terrible record of getting elected to the Oval Office on their own. George H.W. Bush was the first president since Martin Van Buren to be elected straight from V-POTUS to POTUS. (Also ominous for Democrats: 1988 was the only time in the last half-century that a party has won the White House three times in a row, a fact attributable to Ronald Reagan's popularity and Michael Dukakis' Dukakisness). But vice presidents have more success securing the nomination. You have to go back to 1952 and Alben Barkley to find one who sought but failed to win his party's nomination.

I'd be stunned if Biden actually beat Clinton in the primaries, but he doesn't need to win to ruin things for her. Simply by running, Biden would contest Clinton's claim of entitlement and light a match on the Hindenburg that is her "inevitability." He would encourage others from outside the establishment to run against them both as a pair of old-guard retreads who want the presidency out of a sense of entitlement.

And that has the makings of a divine comedy.