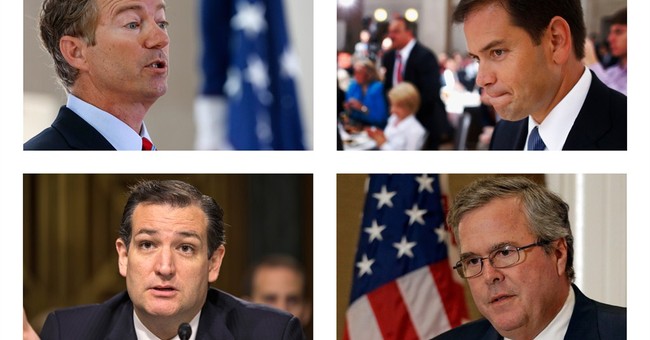 They're back! The isolationist poltergeists that forever haunt the Republican Party. Or so we're told.

In July, New Jersey Gov. Chris Christie and Sen. Rand Paul (R-Ky.) had a set-to over American foreign policy. Christie clumsily denounced "this strain of libertarianism that's going through parties right now and making big headlines I think is a very dangerous thought." It was clumsy in its garbled syntax but also in its ill-considered shot at "libertarianism." What he meant to say, I think, was "isolationist," and that is the term a host of commentators on the left and right are using to describe Paul and his ideas. Even the inestimable Charles Krauthammer sees in Paul the "return of the most venerable strain of conservative foreign policy -- isolationism."

I'm not so sure. Last week, Paul introduced a measure to cut off foreign aid to Egypt. After some lively and enlightening debate, Paul's amendment went down in flames 86 to 13. And, as the Washington Post's Dana Milbank noted, that margin was misleading given that six senators, including Minority Leader Mitch McConnell (R-Ky.), sided with Paul only when they knew he would lose the vote. They didn't agree with Paul on the merits, they simply wanted to stay on the Paul Tea Party machine's good side.

Also, lest it go unnoticed, Paul's idea to cut off Egyptian aid may be a bad idea, but one doesn't need to be an isolationist to think that the aid should be cut. The law says the U.S. should halt aid in response to a military coup. This was a military coup. And, even before the coup, our aid was at best morally questionable.

In other words, rumors that the GOP is returning to its isolationist roots are wildly exaggerated.

In fact, rumors that the GOP's roots were ever especially isolationist are exaggerated too.

Republicans first got tagged with the isolationist label when Massachusetts Sen. Henry Cabot Lodge led the opposition to the Treaty of Versailles after World War I. But his opposition to a stupid treaty in the wake of a misguided war wasn't necessarily grounded in isolationist sentiment. Lodge was an interventionist hawk on both WWI and the Spanish-American War. Lodge even agreed to ratify President Wilson's other treaty, which would have committed the U.S. to defend France if it were attacked by Germany.

Or consider the famously isolationist Sen. Robert Taft (R-Ohio), a role model of former Rep. Ron Paul (R-Texas). As a presidential candidate, Paul routinely touted Taft's opposition to U.S. membership to NATO as proof of the GOP's isolationist roots. But Taft also supported the Truman Doctrine and, albeit reluctantly, the Marshall Plan. He promised "100 percent support for the Chinese National government on Formosa [Taiwan]," and wanted to station up to six divisions in Europe. What an isolationist!

Meanwhile, countless leading liberals and Democrats embraced isolationism by name in the 1930s and by deed after World War II. J.T. Flynn, the foremost spokesman for the America First Committee, for example, was a longtime columnist for the liberal New Republic.

The self-avowed isolationist movement died in the ashes of World War II. But while it lived, it was a bipartisan cause just like interventionism. Similarly, the competing impulses to engage the world and to draw back from it aren't the exclusive provenance of a single party; rather they run straight through the American heart. And neither impulse is always right for every challenge. Even most hawks preferred a cold war to a hot one with the Soviet Union. And most doves supported striking back against al-Qaeda after 9/11.

Krauthammer is absolutely right that the GOP is going to have a big foreign policy debate -- and it should (as should the Democrats). I'm just not sure bandying around the I-word will improve or illuminate that debate very much.