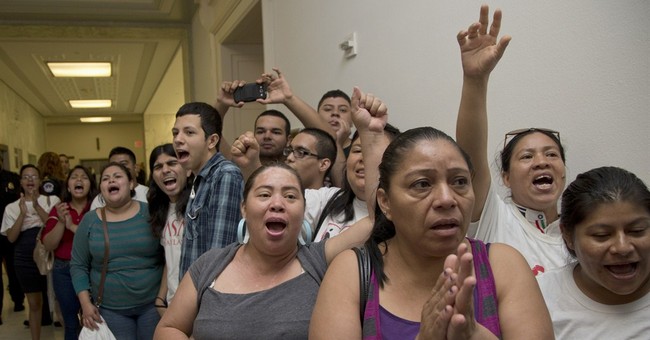 I don't know how Democrats do it

The immigration reform proposal wending its way through the Senate is tearing the Republican Party to pieces. Poor Sen. Marco Rubio (R-Fla.), once the golden boy of the Tea Party and the conservative movement, is being treated like a guy who wants to leave a gang but must submit to a group beating first.

But Rubio is simply the latest javelin catcher in the right's immigration Olympiad. Attention will soon shift to House Speaker John Boehner (R-Ohio). House conservatives are poised to block out the sun with arrows aimed at him if he moves the bill without a majority of GOP support.

Meanwhile, the U.S. Chamber of Commerce just released a TV ad campaign to promote immigration reform that features Sen. Rand Paul (R-Ky.), even though Paul has come out against the legislation because it doesn't include his border security requirements. The Wall Street Journal's editorial board -- always a passionate supporter of maximizing immigration -- seems on the verge of a collective aneurysm as it deals with what it sees as a Republican Party giving in to nativist madness.

By comparison, while the GOP increasingly looks like the fight scene in the movie "Anchorman," the Democrats under New York Sen. Charles Schumer's leadership look like Snow White's dwarfs, whistling while they work.

It helps that President Obama is staying out of it, but even so, Democrats have managed to keep nearly everyone in line. The most vocal critic on the left has been Sen. Bernie Sanders (I-Vt.), who plausibly argues that the bill will disproportionately hurt the unskilled and undereducated poor.

But his support was bought with a $1.5 billion youth jobs program buried in the new 1,190-page revised bill, which senators had a whopping 72 hours to read before Monday's vote.

Still, Sanders' complaint -- and his abdication -- raises interesting issues. One reason the Democrats are having an easier time is that their stakeholders can cut deals and the constituencies will go along. Organized labor will get its carve-outs from the Democrats, as will business groups eager to work on a bipartisan basis.

Contrary to popular perception, the GOP is the far more populist and grass-roots party these days, and the troops are not in a mood to follow orders.

Democrats are usually the ones decrying the pernicious global trends hampering prosperity for the working poor and middle class. And yet, their biggest priority is a bill that will accelerate those trends.

Last week, when the Congressional Budget Office issued a report that the immigration bill would increase GNP per capita by 0.2 percent and slightly reduce the deficit in 20 years, Democrats hailed it as a vindication.

It fell to Republicans to note that the same CBO report assumed the legislation would reduce immigration by a mere 25 percent and would very modestly reduce average wages in the first decade. Schumer has been selling the bill as a way to make illegal immigration "a thing of the past." A 25 percent reduction doesn't sound like the dustbin of history to me.

Liberal wonks raced to defend the bill on the wage issue by noting that average wages wouldn't necessarily go down for existing workers. (If 10 people make $100 a day, and you add an 11th who makes $50 a day, the average goes down even if everyone's wages don't.) But arguing about how much wages will or won't go down is a far cry from claiming wages will go up.

Polling shows that there's a huge amount of consensus about what to do on immigration. If people here illegally meet strict requirements -- pay back taxes, a fine, etc. -- support for a path to citizenship is high, even among Republicans. Without those requirements, it plummets.

The same goes for border security. Convince people that this is a one-time thing and not a replay of the amnesty under Ronald Reagan, and most conservatives are eager to put this issue behind us.

The hitch is that the right is just not in a trusting mood. They feel, with ample justification, that Washington, including the GOP, has been betraying them -- by accident or on purpose -- for too long. I can understand that completely. What baffles me is why rank-and-file Democrats don't feel the same way.