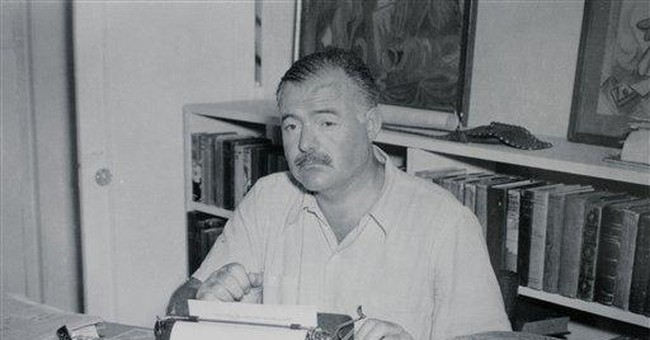 One of my New Year's resolutions is to work harder to persuade ideological friends and foes alike that the way to reduce partisanship and maximize happiness in America is to embrace federalism -- the view that we should push as many decisions as possible to the lowest local level feasible.

Federalism reduces partisanship by shrinking the importance of the federal government. It increases happiness by maximizing the number of people who get to live the way they want to live.

I'm for making all of those things local issues wherever possible, too. But, admittedly, those questions are complicated or emotionally freighted. Some questions do cut to the heart of what it means to be an American.

But many don't. So let's start there.

For instance, consider the case of Ernest Hemingway's six-toed cats. According to legend, the writer was given a polydactyl (six-toed) feline named Snowball. Under a deadline, I could not determine whether Snowball was in fact male or female, but assuming he was a he, Snowball managed to overcome the limitations of his emasculating name to leave behind generations of progeny.

Snowball's six-toed descendants live on at the Hemingway Home and Museum in Key West, Fla. Hundreds of thousands of tourists visit every year to see where Hemingway lived when he wrote "To Have and Have Not" and to see 50 or so cats of Snowballian lineage lounge about the grounds of the Spanish colonial.

The cats get weekly veterinary visits and regular belly-scratchings from tourists. The Hemingway Home website says that the cats even have a corporate sponsor, Pfizer, which provides free medicine for them. Most are spayed or neutered to keep the number of Snowball's descendants from snowballing.

The property has a high wall, but as cats are wont to do, they occasionally get out and wantonly rub up against the legs of passersby.

In short, the whole scene is one of sickening cuteness and laid-back charm, consecrated by time and local tradition.

And the federal government cannot abide that.

The Department of Agriculture insists that the cats, with their flagrant sidewalk-napping and unauthorized public self-grooming, must be regulated like lions or elephants or any other "animal exhibit." As a result, the owners of the museum must:

"obtain an exhibitor's license; contain and cage the cats in individual shelters at night, or alternatively, construct a higher fence or an electric wire atop the existing brick wall, or alternatively, hire a night watchman to monitor the cats; tag each cat for identification purposes; construct additional elevated resting surfaces for the cats within their existing enclosures; and pay fines for the museum's non-compliance with the Animal Welfare Act."

I don't have the space here to get into all of the details of this 10-year-old legal dispute. But, in short, it's all incredibly stupid.

The fracas began when a neighbor felt that one of the Hemingway cats -- Ivan -- was getting, in her words, too "macho" with the street cats she fed a couple doors down. So, obviously, she complained to the government in Washington about Ivan the Terrible, and Uncle Sam sprang into action.

After a decade of squabbling, a federal appeals court recently sided with the Obama administration, ruling the museum must comply with the federal diktat or get rid of the cats.

To be fair, maybe the cats are a problem. But you know what? If they are, they're not my problem. I don't live in Key West.

In other words, what on earth is Washington doing setting cat policy -- polydactyl or otherwise -- for Key West, Fla.?

I'm always amazed by people who love visiting exotic locales abroad -- and are often sanctimonious about keeping them exotic -- but simultaneously support a government at war with exoticism here at home.

The federal government has plenty on its plate already. It should not be the cavalry of busybody neighbors or aggrieved cat ladies who can't win an argument at the local level.

Key West is not Mogadishu. It has a functioning government, as does the state of Florida. Residents there -- and across America -- are capable of self-rule, which includes the right to live in ways other Americans might think is crazy or wrong. If the six-toed cats launch an insurrection, complete with an updated feline "Don't tread on me" feline flag, by all means send in the feds.

Otherwise, the locals can work it out for themselves. They'll be happier, and Key West will be a more interesting place to visit.

Wait...The Biden Family Might Have Some Dirty Serb Deals?
Matt Vespa
American Reporters Were Locked Out of Biden's Meeting with Putin. Russia Reporters Were Let In.
Katie Pavlich