The Reality of Obamacare 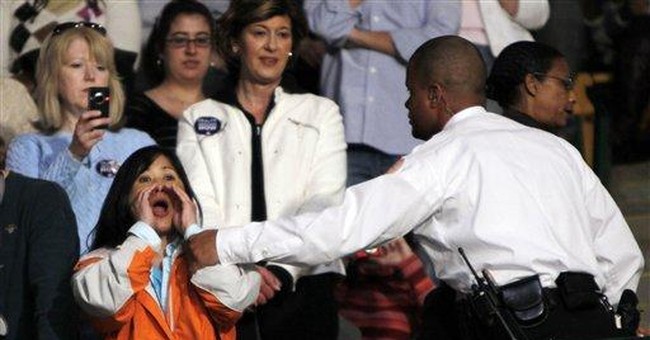 First: Congratulations to President Obama and the Democratic leadership. You won dirty against bipartisan opposition from both Congress and the majority of Americans. You've definitely polarized the country even more, and quite possibly bankrupted us, too. But hey, you won. Bubbly for everyone.

Simply, you have nationalized health care by proxy. Insurance companies are now heavily regulated government contractors. Way to get big business out of Washington and our lives! These giant corporations will clear a small, government-approved profit on top of their government-approved fees. Then, when health care costs rise -- and they will -- Democrats will insist, yet again, that the profit motive is to blame, and out from this ObamaCare Trojan horse will pour another army of liberals demanding a more honest version of single-payer.

The Obama administration has turned the insurance industry into the Blackwater of socialized medicine.

That's always what Obama had in mind. During the now-legendary health care summit, Obama, who loves to talk about "risk pools," "competition," "consumer choice" and the like, let it slip that he actually doesn't believe in insurance as commonly understood. The notion that Americans should buy the health care "equivalent of Acme Insurance that I had for my car" seemed preposterous to him. "I'm buying that to protect me from some catastrophic situation," he explained. "Otherwise, I'm just paying out of pocket. I don't go to the doctor. I don't get preventive care. There are a whole bunch of things I just do without. But if I get hit by a truck, maybe I don't go bankrupt." Apparently, people are just too stupid to go to the doctor -- or maintain their homes -- if they have to pay much of anything out of pocket.

The endgame was to get the young and healthy to buy more expensive insurance than they need or want. "Expanding the risk pool" and "spreading out the risk" by mandating -- i.e., forcing -- young people to buy insurance is just market-based spin for socialist ends. A risk pool is an actuarial device where a lot of people pay a small sum to cover themselves against a "rainy day" problem that will affect only a few people. Such "peace of mind" health insurance is gone. What we have now is health assurance. With health assurance, there are no "risk pools" really, only payment plans.

Under the new law, all the exits from the system are blocked. You can't opt out or buy cheap, high-deductible Acme Car-type insurance, even if that's what you need. Ultimately, even that coercion won't be enough to make the whole thing work because the "cost curve" will not be bending.

Profit-hungry insurance companies were never the problem. (According to American Enterprise Institute economist Andrew Biggs, industry profit margins are around 3 percent, and the entire industry recorded profits of just $13 billion last year, close to a rounding error in Medicare fraud estimates.) Rather, health care costs have been skyrocketing because consumers treat health insurance like an expense account. Putting almost everyone into one "risk pool" doesn't change that dynamic; it universalizes it. And eventually, the only way to cut costs will be to ration care.

In September, Obama got into a semantic argument with ABC's George Stephanopoulos, who noted that requiring all Americans to pay premiums for a government-guaranteed service sounds an awful lot like a tax. "No. That's not true, George," Obama said. "For us to say that you've got to take a responsibility to get health insurance is absolutely not a tax increase. What it's saying is ... that we're not going to have other people carrying your burdens for you."

Stephanopoulos invoked a dictionary definition of a tax: "a charge, usually of money, imposed by authority on persons or property for public purposes." Obama laughed off the idea that a dictionary might outrank him as the final arbiter of a word's meaning: "George, the fact that you looked up ... the definition of tax increase indicates to me that you're stretching a little bit right now. Otherwise, you wouldn't have gone to the dictionary to check on the definition."

OK, put aside your dictionaries. The legislation allocates $10 billion to pay for 16,500 IRS agents who will collect and enforce mandatory "premiums." Does that sound like the private sector at work to you?