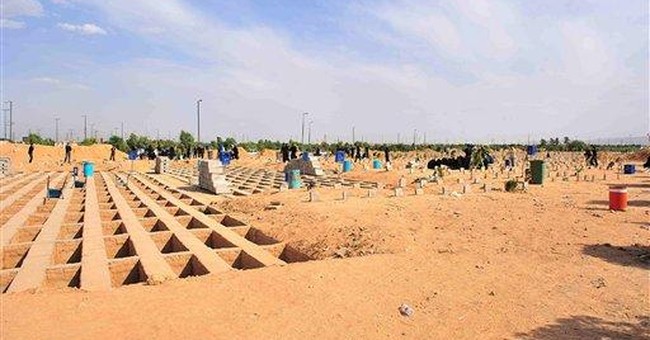 Here is the one immutable fact of Barack Obama's foreign policy agenda as it relates to Iran: It's over. The rule book he came in with is as irrelevant as a tourist guide to the Austro-Hungarian Empire.

Politics and decency will simply demand that the world condemn or shun the regime of Mahmoud Ahmadinejad and Ayatollah Ali Khamenei if they come out on top. Even the most soulless realists will be repulsed by the blood on the regime's collective hands.

Before June 12, Obama's eagerness to negotiate with Ahmadinejad -- ridiculed by his conservative critics -- was hailed by the establishment and the left as proof of his high-minded faith in diplomacy, a healthy antidote to George W. Bush's allegedly close-minded approach.

But now, if the clerical junta prevails, anyone who shakes hands with Ahmadinejad will have a hard time washing the blood off his own hands.

What is dismaying is how reluctant the administration has been to accept this. As even some of Obama's most stalwart defenders are admitting, the president was caught flat-footed by the events in Iran. There's no shame in that; everyone was surprised.

His initial instinct, according to Jim Hoagland of the Washington Post, was to cling "to the pre-election paramount goal of keeping alive the chances for a nuclear deal with any government in Tehran." To that end, Obama said there was little difference between Mir Hossein Mousavi and Ahmadinejad, and he refrained from "meddling." Within a week, he gave a full-throated denunciation of the regime's clampdown and a statement of support for the protesters. But he only did so after the Europeans and our own Congress.

Why is it so hard for Obama to get a handle on the Iranian challenge? Hoagland and others are surely partly right that the president is determined to negotiate with Iran. But Obama has made it clear that he sees the elimination of Iran's nuclear problem not as a stand-alone priority but as one part of his Middle East two-step. His inseparable goal is to also push Israel into a peace settlement with the Palestinians. As an unnamed Iran expert in contact with White House officials told Foreign Policy's Laura Rozen, "Obama is dedicated to diplomacy in a manner that is almost ideological. ... He wants to do some stuff in the Middle East over the next eight years. He may not be able to achieve half of them unless he gets this huge piece of the puzzle (Iran) right."

That "stuff" seems to be some grand Middle East transformation, whereby Obama promises to negotiate away Iran's nuclear program in return for Israeli movement on an Israeli-Palestinian settlement. In effect, Obama would be using the threat of a nuclear-armed Ahmadinejad as a Medusa's head to petrify Israelis into concessions.

Whether such a strategy would have worked is open to huge quantities of skepticism. Now, after what's happened in Iran in recent days, such a plan is simply impossible.

For years, conservatives or, if you prefer, neoconservatives, have said that the Iranian regime can't be negotiated with. Some emphasized that anti-Americanism is at the core of the regime's identity. Some noted that Obama-style "open-handed" overtures to Iran were rebuffed. (Obama may have acknowledged U.S. support for the 1953 overthrow of the Mohammed Mossadegh regime in the hope that such frankness would win him goodwill from the regime. But no such goodwill followed Madeleine Albright's apology in 2000.)

Others pointed to the messianic and conspiratorial zeal that animates Iran's clerical junta. Many invoked Iran's steadfast animus toward our ally Israel as well as its sponsorship of "scholarly" Holocaust-denial and the more tangible support for Hezbollah and others bent on murdering Jews. Iran's efforts to derail democracy and stability in Iraq by, among other things, supporting attacks on American troops is also part of the talk-is-folly brief.

None of that was sufficient evidence for Obama, in part because anything associated with Bush's freedom agenda was deemed absurd and ideologically rigid.

Well, Bush is gone. Obama has extended his hand. And the regime is supplying fresh evidence of the absurdity of his approach. All that's left for Obama now is to abandon his own ideological rigidity and start over.