Photos or No Photos, It's Hard to Picture Obama Winning Over U.S. Enemies 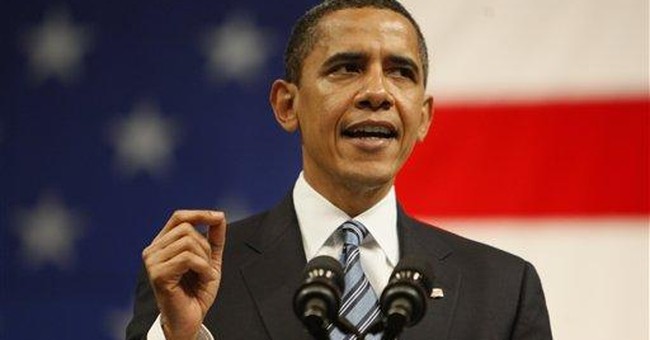 If President Obama is sincere in his expressed desire to block the release of photos of alleged prisoner abuse in U.S. detention facilities in Iraq and Afghanistan, congratulations are in order.

But I'm taking a wait-and-see approach. Obama himself admits that he's merely hoping to delay the release of the photos. Meanwhile, Andrew McCarthy, a fellow at the National Review Institute and terrorism expert, makes a compelling case that Obama is trying to vote "present" once again. After all, if Obama truly wanted to block the release of these photos in order to protect American troops, he could issue an executive order taking them beyond the reach of the courts and the Freedom of Information Act. Instead, Obama's heading back to the courtroom to re-litigate the matter. This way, if the courts reaffirm that the photos must be released, Obama can say, "My hands are tied." Even the Associated Press sees Obama's maneuver as a way to "pass the buck to the courts." We'll see what happens.

It seems that Obama is on something of an intellectual journey. Up until his May 13 decision to change course on the photos, it seemed fairly clear that he had a solid theory of how to sell America to the world: apologize. Admit to some of our harshest critics' and enemies' theories of American wrongdoing and they will love us for it, particularly if you can pin it all on George W. Bush in the process. This approach, at least rhetorically, came straight out of the antiwar left. It assumed that our foreign enemies and our critical allies and the domestic left all share a similar critique of America, which is high-proof nonsense.

The strategy hardly seems to have yielded many tangible results with our critical allies, like France and Germany, who've largely scoffed at U.S. leadership, even in the age of Obama.

And as for our enemies, the strategy falls apart even more. After all, the Taliban's successes have mounted during Obama's tenure, and there has been an uptick in Iraq violence as well. This isn't to say Obama's to blame; he's not. It's simply that the new era of hopeful-changiness has meant nothing to our enemies.

Let's start at the beginning. Modern Jihadism has its roots in the writings of Sayyid Qutb, an Egyptian radical intellectual who was sort of the Rousseau of Jihadism.

Qutb's hatred for America was nurtured during a visit to the United States, specifically over a long stay as an exchange student in Greeley, Colo., in 1949-50. At that time, Greeley was a Rocky Mountain Mayberry. Clean, polite, orderly and without a single bar in the whole town, Greeley was nonetheless for Qutb a grotesque den of iniquity. What really stewed his bowels was a sock hop where teenage girls danced with boys to the libidinous strains of "Baby, It's Cold Outside." The mixing of sexes in churches was "animal-like."

The Islamism practiced by followers such as Osama bin Laden has changed little since Qutb's execution by Egyptian authorities in 1966. Bin Laden and his gang are the world's most powerful puritans. Iraqi Sunnis turned against al-Qaida in no small part because the foreign fighters wanted to ban smoking and throw drop cloths over every Iraqi woman. Mohammed Atta, the leader of the 9/11 hijackers who was not squeamish about dying, or about carving up innocents with box cutters, had one desperate request before he died: Make sure no women touch my underwear after I'm dead.

Or consider the Uighurs -- Jihadists from the Muslim hinterlands of China -- the Obama administration is planning to release into D.C.'s Virginia suburbs and put on the public dole. At Gitmo, these detainees were allowed to watch television because they were deemed nonviolent. While watching a televised soccer game, the camera showed women with exposed arms, and the Uighurs went ballistic, picking up the TV and smashing it.

In short, these people can't be won over, at least not without apologizing for a lot more than George W. Bush. Admitting a few mistakes or releasing a few photos won't convince them we've turned over a new leaf, because their hatred of America stems from a hatred of modernity itself.

Meanwhile, giving the Jihadists propaganda tools to help them say "see, we were right" won't curtail recruitment, it will fuel it. At least that's what Obama's most senior military advisors reportedly told him.

It's good news that President Obama is open to such arguments. It remains to be seen whether he's actually persuaded by them.