For McCain, Surge is a Losing Strategy 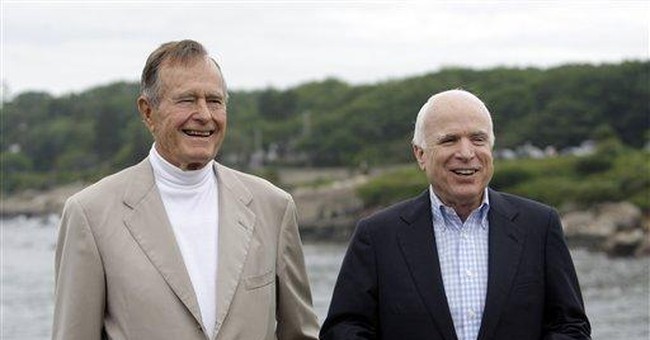 "Senator Obama didn't support the surge, wanted to pull out, said that it would fail. I supported it when it was the toughest thing to do. I believe that my record on national security and keeping this country safe is there. And the American people will examine our records, and I will win."

He's leading a loud chorus of conservatives and Republicans desperate to make the surge the defining issue of the campaign.

In an editorial for the conservative Weekly Standard, Fred Kagan (the primary intellectual author of the surge strategy) wrote: "It would be hard to design a better test for the job of commander in chief than the real-life test senators John McCain and Barack Obama have undergone in the last two years."

It's understandable why so many Republicans see the surge as an ideal political battleground. Outside foreign policy, McCain's standing with the GOP base is shaky. The party doesn't have many policy wins to brag about. And Obama doesn't have much of a record to attack. Also, many hawks - often called neoconservatives - see the surge as vindication that they were right about the feasibility of the Iraq invasion from the beginning. It was President Bush's bungling that was wrong, they say, not the war itself.

Whatever the merits of all that, there's a problem. As political analysis, it's nonsense.

Within months of the invasion, McCain was calling for more troops and the head of then-Defense Secretary Donald Rumsfeld. Later, when the Iraqi civil war erupted, al-Qaida in Iraq metastasized and Iran mounted a clandestine surge of its own, McCain doubled down; he argued that we couldn't afford to lose and proposed a revised counterinsurgency strategy for victory. That was the same month that Obama introduced the "Iraq War De-Escalation Act of 2007."

That's great stuff for McCain's biographers. But the catch-22 is that the more the surge succeeds, the more advantageous it is for Obama.

Richard Nixon didn't win in 1968 by second-guessing LBJ about the mess in Vietnam; he ran on getting us out with honor. McCain is great when talking about honor, but the getting-us-out part is where he gets tongue-tied. Obama, meanwhile, talks about leaving Iraq as though Americans don't care about honor. That may have worked in the early primaries, but it won't in the general election. Americans don't like to lose wars.

Politically, the surge is a bit like the Supreme Court's recent decision affirming the constitutional right to own a gun. Obama's position on gun rights, a miasma of murky equivocation, would hurt him if gun control were a big issue this year. It isn't, thanks to the high court's ruling. That's a huge boon.

The surge has done likewise with the war. If it were going worse, McCain's Churchillian rhetoric would match reality better. But with sectarian violence nearly gone, al-Qaida in Iraq almost totally routed and even Sadrist militias seemingly neutralized, the stakes of withdrawal seem low enough for Americans to feel comfortable voting for Obama. Iraqi Prime Minister Nouri Maliki's support for an American troop drawdown pushes the perceived stakes even lower.

Recall that Bill Clinton, with his dovish record and roster of "character issues," would never have been elected if the Soviet Union hadn't collapsed in 1991. With the Cold War over, the successful Reagan surge (and Bush pere's cleanup efforts) made rolling the dice on Clinton tolerable. The McCain surge (and Bush fils' success at averting another 9/11) produces the same effect for Obama.

A silver lining for McCain is that Obama's arrogance and sense of indebtedness to his party's antiwar base have elicited a series of credibility-damaging zigzags on Iraq. Obama would do better to promise peace with honor as soon as possible, then quickly move on to economy talk. The subsequent bleating from the bug-out lefties would be useful testament to Obama's rumored centrism.

Although the economy will dominate this election, McCain can still press his advantage on foreign policy. But not with I-told-you-sos. Re-arguing the surge is almost as counterproductive as re-arguing the war itself. Elections are about the future.

McCain doesn't need to explain why he'd be a better commander in chief. Voters already acknowledge his superior judgment on foreign policy by huge margins. He needs to explain why, going forward, we'll need that judgment.

Panic Has Struck a Blue State Now That Biden's Taking Aim at Fracking
Townhall
David French adds some perspective to that 'handful' of bad executive orders signed by President Biden
Twitchy
Buyer's Remorse Sets in Over Joe Biden, But It's Much too Late for the Crying
Redstate
Unity Watch: Sorry President Biden, the Honeymoon Is Over Before It Even Started
PJ Media