John R. Lott, Jr.
|
Posted: Aug 06, 2018 9:20 AM
Share   Tweet
The opinions expressed by columnists are their own and do not necessarily represent the views of Townhall.com. 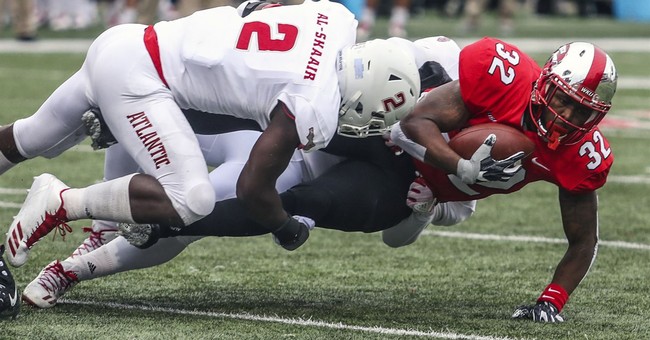 With the pro-football season starting this coming week for most teams, media outlets have returned to their steady drumbeat about concussions. Despite the excitement of kickoff returns, college football has bowed to pressure with a new rule this year to discourage kickoff returns.

But if the media really cares about concussions, they shouldn't be singling out this uniquely American sport.

College athletes suffer about twice the frequency of concussions as high school athletes. In high school, football is riskier than soccer. But girls' and boys' soccer are still the second and third most dangerous sports for concussions, followed closely by girls' basketball.

But evidence also shows that soccer is responsible for more of the serious concussions among high school athletes. Soccer concussions are about twice as likely as football concussions to require 22 or more days of recovery.

Unfortunately, soccer players are much less likely than football players to recognize that they have suffered a concussion. So, they are less likely to take the time to rest and get treatment. Perhaps players aren’t aware of the dangers because the media only fixates on concussions from football.

An article in the Journal of Neurology compared soccer players from several professional Dutch clubs with a control group of elite athletes in non-contact sports. The study found that professional soccer players exhibited relatively impaired performances in memory, planning, and visual perceptions. How poorly the players functioned was related directly to how frequently they had headed the soccer ball.

College football mandated helmets in 1939, and the NFL followed suit in 1943. Since then, the gear has undergone regular improvements. But despite new research showing that soccer helmets can reduce the rate of concussions by up to 70%, soccer remains resistant to any change. There is still no media drumbeat against the sport.

Still, even staying away from sports won’t guarantee protection from concussions. A new study this year in the Journal of Occupational and Environmental Medicine found that even theater isn’t a safe extra curricular choice for students.  The study found a “stunning” rate of “concussion-related symptoms”: 77 percent had a least one head injury and 39 percent had at least five.  Unfortunately, 70 percent continued working even after having concussion-related symptoms.

Politicians have helped create the perception that football is particularly risky. Senate Minority Whip Dick Durbin (D-IL), the second-ranking Democrat, has introduced legislation mandating research on concussions in football, hockey, basketball, and baseball.   But there is no mention of soccer.   Senators Tom Udall (D-N.M.), Amy Klobuchar (D-Minn.) and Richard Blumenthal (D-Conn.) want to pass stricter safety standards for high school football helmets.  Former President Obama went so far as to say in 2014, "I would not let my son play pro football."

If football is such a scourge, where is the concern over even riskier sports such as soccier, hockey, and wrestling?

Soccer might currently be the "in" politically-correct sport that is played by supposedly culturally superior Europeans, but parents who push their children into playing it for safety reasons are in for an unpleasant surprise.