Laughing at the Axis of Evil is Funny No More 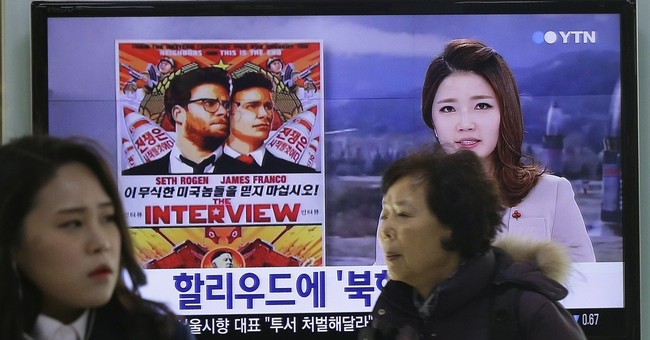 Sony Pictures is triumphant today because their release of the North Korea-inspired comedy The Interview by Seth Rogen and James Franco had an estimated sales of $15 million over the weekend from largely online sales.

The movie was schedule to be released in about 3,000 theaters, but because of “terror” threats, it was released in a limited number of theaters and online.

The revenue is about $5,000 per canceled theater, or about 300 people per theatre. Kind of light traffic for a new release with a great deal of publicity surrounding it.

Count it another triumph however for a renegade state that should fear the United States rather than thumb it’s nose to it.

The consequences are real.

As a recap, North Korea is widely blamed for a hacking incident at Sony Pictures in retaliation for the scheduled release of The Interview, a movie parody of a mythical assassination of one of the Kim Jongs that now runs the Stalinist state that the United States is still at war with in the Korean Peninsula.

In it wake of the attack, a group calling itself Guardians of Peace-- more than likely North Korea-controlled-- threatened terror attacks if movie theaters ran it.

“When a group calling itself Guardians of Peace warned of a replay of the 9-11 terrorist attacks if the film made it out, five chains representing the vast majority of movie screens—Regal, AMC, Cinemark, Carmike Cinemas and Cineplex -- caved and chose not to show the film,” writes Rick Newman of Yahoo Finance.

The obviously didn’t want the liability of an incident happening since they had been forewarned.

So instead of releasing it to the big chains, The Interview was shown in about 300 movies nationwide says Newman, and released online.

You can hardly blame the movie chains however.

Why would they take the liability when the administration will actually do very little to punish the North Koreans for an act of industrial and commercial sabotage?

True, the U.S. supposedly took down the Internet for 24 hours in North Korea, but whatever: That’s like accusing Kim Jung Un of bad, bad boy.

I supposed we should just be happy that Obama didn’t REWARD North Korea for the attack.

Because that’s apparently what he’s doing with another renegade partner of North Korea’s, Iran.

When asked by an NPR reporter yesterday if the U.S. would reopen an embassy in Tehran, the Iranian capital, Obama said he wouldn’t rule out the possibility, even though Iran has been working hard to develop a nuclear weapon capable of reaching the United States.

“The Obama administration has been telling members of Congress that it has won significant concessions from Iran for recently extending nuclear talks,” says the Huffington Post, “including promises by the Islamic republic to allow snap inspections of its facilities and to neutralize much of its remaining uranium stockpile.”

So a new embassy in the only country to sack our embassy, and hold our diplomats hostage seems like a good idea, especially at a time Iran is still working on nukes.

While the threat of a nuclear attack may seem remote, even now Iran might have enough enriched uranium to cripple the U.S. were they to use their stockpile strategically, as in an electro-magnetic pulse attack on the U.S.

A low yield weapon exploded 200-300 miles above the U.S. would generate enough EM pulse that it would likely kills tens of millions, if not literally hundreds of millions in the ensuing power outage.

And the Chevy Volt-- the only good consequence to come out of such an attack.

Babies and elderly would die in hospitals, followed by widespread starvation and dehydration as literally everything that relies on electricity would stop.

And if Iran doesn’t have sufficient fuel—or will-- for such a gambit, North Korea does.

While many scoffed at the “botched” North Korean nuclear tests conducted in 2006, the yield achieved could be sufficient for an EMP attack delivered via a medium range missile via container ship. There is sufficient evidence that North Korea and Iran cooperate enough on missile technology to make such a scenario possible, even though perhaps not yet plausible.

“More recently, 2013 and 2014 Department of Defense reports to Congress on North Korea’s military capabilities and proliferation activities,” writes the Congressional Research Service, “identified Iran as a past recipient of North Korean ballistic missiles and associated technology.”

What are two renegade states to do?

The other is this: Are anything we are doing in response to what we know of North Korean and Iranian intentions sufficient to get them to stop.

Please: A movie scares North Korea more than Obama does.

A comedy at that.

How ineffectual do you have to be to be less feared than Seth Rogen?