Where the Greed is at Under Obama: Autos and Academics 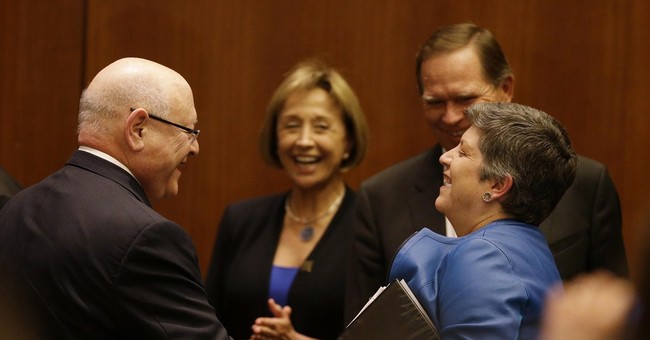 As year six of the “recovery” stumbles along just as previous years have, giving uneven results in employment and economic growth, we can say for sure that the big parts of corporate America—the publicly traded companies—are doing well, at least on the surface.

Thanks in part to cheap debt made possible by the Federal Reserve, corporations are borrowing record levels of money to fuel make-believe profit growth by balance sheet arbitrage: Lowering interest rates on existing debt, borrowing money to pay extra dividends and borrowing money to buy back shares. And now that they have done all they can on that front, they are using tax haven arbitrage to goose things a bit more. Companies are moving from tax-heavy jurisdictions like the United States, to places that are friendlier to corporate profits.

“Corporate debt is at record levels – at 57% of gross domestic product,” reports the Wall Street Journal, “it’s the sixth consecutive quarterly record and the highest level since 1955.”

This is exactly how it should be.

In the real world, all of us, including corporations, take conditions as they are and figure out how to succeed under those conditions. Taking advantage of low interest rates and the stark fact that the United States can’t compete with other countries on tax policy are the natural defense mechanisms corporations will use against policies purposefully pursued by politicians who lack the wisdom and foresight to act responsibly.

On Main Street things are a bit different; not quite as rosy as the view from the corporate box suites.

On Main Street the Federal Reserve is bemoaning the fact that households are loathe to parting with money. Frankly, people aren’t spending money. As I’ve noted here and elsewhere, monetary velocity is at a record low while money supply is at a record high. That means that we have more dollars than ever before yet those dollars are changing hands less frequently than ever before.

Household debt has declined—which in and of itself is not a bad thing. But it’s problematic when you are trying to turn around an economy that relies heavily on consumer spending that relies heavily on borrowing. Borrowing is up for new cars, which shouldn’t surprise anyone given the resources the government has made available to the auto industry. Yet borrowing is down for the housing industry, which shouldn’t surprise anyone given the war the administration has waged on mortgage lenders and homebuilders.

Borrowing is also up for student debt at $1.12 trillion—that’s almost twice the $650 billion represented by credit card debt. While some would argue that its better to have debt for education than for stuff purchased by credit card, the return on investment for that education remains poor with highly educated former students struggling to make student loan payments—a thing that just seems dumb.

If you are in academia or autos, you see, money is apparently not a problem. That’s official government policy.

But if you live on Main Street and wish to get a loan for something else, forget it.

And the central piece that makes these policies possible is the Federal Reserve Bank of the United States, jointly owned by Congress and the member banks.

The bank stopped acting as the “reserve” bank that provides liquidity in times of stress to its member banks. Instead it acts as the bank for the government, loaning money for autos and academia, but outside of Wall Street, not much else. Its reserve function is an afterthought.

There is no question that the principal failure during the financial crisis of 2008 was the failure of the central bank to be able to offer the reserve liquidity necessary to meet the crisis. The Federal Reserve was too busy doing other things to be bothered with being a reserve bank.

A real reform for both our Republic and the financial markets would be to make the Fed operate as the reserve bank for the banking system.

And to do nothing else.