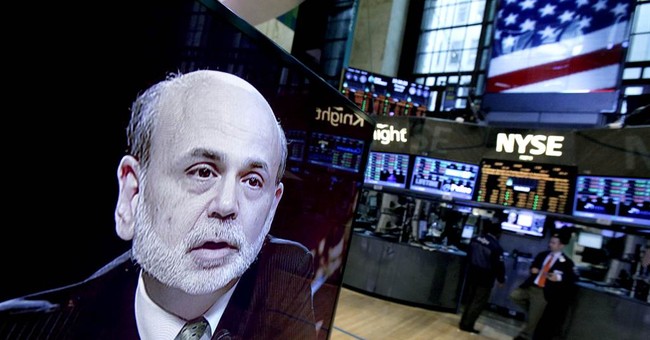 While the withdrawal of Larry Summers from consideration for the top job at the Federal Reserve Bank is good news for those of us who are hoping for some sanity from the Fed, the battle is not over.

“Summers, widely regarded as a brilliant economist and a shrewd and decisive policy-maker,” reports Reuters, “was considered to be the front-runner for the position to replace [current Fed Chair Ben] Bernanke, whose second term expires in January. However, Summers was dogged by controversies including his support for deregulation in the 1990s and comments he made about women's aptitude while president of Harvard.”

So now that Summers is gone, the big question lingers: Will we never exhaust the endless supply of brilliant, shrewd, liberal economists who know how to do only one thing, namely, print more money?

Because after Larry Summers, then there is Janet Yellen, who now appears the front runner for the top job at the Federal Reserve Bank.

So prepare to keep the printing presses going boys… and girls.

Increasingly, I have been getting the impression that even dovish bankers, like Yellen, are looking at the QE printing presses with a more skeptical eye.

This, perhaps more than any single thing, was the reason why Obama favored Summers over Yellen.

Yellen, as Fed Chairman, will do what her cold, brilliant(!) economist, misguided, liberal heart tells her to. Summers on the other hand would bend purely to politics over policy. Summers is more a liberal politician; Yellen is more a liberal banker.

Summers, for example, would continue the quantitative easing program in perpetuity as long as it allowed the White House to say that the recovery is moving along just as they planned, regardless of the risks to the economy.

But I get the sense that there’s a rift between the White House and the bankers, like Yellen, and that in part is the reason why Ben Bernanke, who is also purely a banker-- even if an academic one-- did not get a shot at a third term as Federal Reserve Chairman.

Okay maybe not so much of a rift as a disconnect.

“Strategists have said markets are now pricing in a decision by the Federal Reserve to start scaling back its bond purchases when it concludes a two-day policy meeting Wednesday,” says MarketWatch. “In fact, much of the back-and-forth among financial forecasters in the past week has centered on how much the Fed will reduce initially.”

That the debate centers on how much tapering the Fed will do rather than will-it-or-won’t-it taper is bad news for the White House.

And one only need look at the 10-year Treasury to understand that the market is of one mind on the “end of QE.”

It’s coming whether the White House wants it or not.

The interest rate on the 10-year Treasury has almost doubled since May. This at a time when the Federal Reserve was trying to keep interest rates at zero.

Even the not so free-market in Treasury securities, manipulated by the largest bank in the history of mankind, eventually becomes the victim of reality.

The market, in other words, is telling the Federal Reserve that QE is over… whether they like it or not.

That inactivity is the result of political decisions that have been postponed from time to time, and obfuscated mostly, and deranged, mangled, and warped.

The White House wants QE to continue forever because then they don’t have to submit a budget, pass any laws, cut any departments, battle fraud in government programs, or in any wise act as a responsible government.

The wealth effect of quantitative easing, which seems to infect only the top folks in our society and on Wall Street, will continue papering over any missteps, flaws or fallacies that the liberals want to foist on a trusting public.

As long as the market keeps going up, then all is well for the Obama White House.

But in that event liberals will then have to think up better ways of producing the worst jobs recovery since the end of the Second World War.