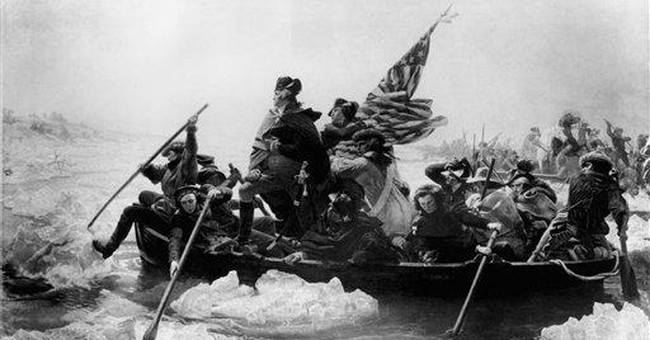 Before he was America’s first president, George Washington was a spy and a soldier, serving on America’s frontier. His spying activities in advance of the French and Indian War brought him a national reputation and helped precipitate that great war. The reputation he built then secured a military command for him in that war which would eventually lead to international acclaim as America’s first commander-in-chief.

In the year of 1753, French soldiers marched south from Canada into an area where claims of sovereignty between France and England were in dispute. This area is roughly where Pittsburgh, Pennsylvania is now located at the forks of the Ohio and Allegheny rivers. The French soldiers brought with them Native American warriors and together they harassed, captured and killed English, Dutch and German settlers in order to scare them into leaving the area in order to claim the land for France.

The governor of Virginia, Robert Dinwiddie, chose 21 year-old George Washington to trek 400 miles into the frontier to deliver to the French a demand to leave the disputed area or face the prospect of war with colonial America and England.  Washington also went to gather intelligence on the way, as there was little doubt that England and America hoped to pick a fight as much as the French did.

We know quite a lot about what happened on this expedition because Washington kept a diary that was later published.

According to the diary, Washington took with him Jacob Braum, his fencing master, and two Native American scouts lent to him by Half King, America‘s Native American ally plus he "engaged Mr. Gist to pilot us out, and also hired four others as Servitors, Barnaby Currin, and John MacQuire, Indian Traders, Henry Steward, and William Jenkins, and in Company with those Persons, left the Inhabitants the Day following."

They plunged into the wilderness, taking notes about the country, and how best to defend it. Washington was very familiar with this area. He had been traveling these roads on business for years. He owned a great deal of land in the area, like many of the pro-war party in Virginia. He accumulated the land by acting as a frontier surveyor.

After weeks in the wilderness and often sleeping with no cover on the hard ground, Washington made contact with a party of French soldiers as winter was coming on. The soldiers took him to the fort that the French had recently built near the forks of the Ohio and Allegheny rivers. The commander of the French forces in the area was named Monsieur Tissot. Washington told Tissot that he was on a diplomatic mission and that he had a communication from the royal governor of Virginia. Monsieur Tissot read the letter from Governor Dinwiddie but said that a reply would be a long time coming as he needed to send the letter to his master in Quebec, says Washington.

In the meantime, the French entertained Washington and his party with elaborate courtesy, holding feasts and parties in their honor. Washington was given freedom to inspect the French fort and made notes about its weapons and design.

Finally after weeks of waiting, with snow beginning to accumulate on the ground, George was given the bad news: the French had no intention of leaving the area. This meant war.

Washington was impatient to leave the fort, although it meant braving icy temperatures and ice-clogged rivers for the 400 mile return trip to Williamsburg, the capital of colonial Virginia. Waiting until the weather warmed would allow the French to have months to prepare for the spring and fighting; and the Virginians might be attacked by surprise.

Equipped with a pair of snowshoes, Washington says he left the French fort accompanied by his guide, Christpher Gist, and two Native American scouts friendly to the French.

Shortly into their journey, one of the native scouts fired at Washington and Gist with a musket but the bullet missed its target. They chased him away, but they took the other scout prisoner until they could put many miles between themselves and the prisoner’s friend. When they were safely away, they released the scout unharmed, records Washington in his journal account.

Washington and Gist then traveled quickly, worrying hostile natives might be all around them.

Using hatchets, they spent an entire day fashioning a raft to cross an ice-choked river. As they crossed, they used poles to push the raft across, and to avoid the ice chunks in the river. Unfortunately their homemade raft was no match for the ice.  One chunk after another bombarded the raft until both Washington and Gist were forced overboard. They swam safely to a small island in the middle of the river. They spent the night in frozen clothes sleeping on the ground. The temperature dropped so low that in the morning that they were able to walk safely across the frozen river and shortly thereafter arrived in the colonial capital.

The colonial legislature in Virginia (the House of Burgesses) after reading Washington’s own account of his adventures, voted to raise an army to confront the French, and if necessary fight them. Because of his distinguished service as a diplomat-spy, Washington was selected as the second in command of the Virginia army.

Much of Washington’s military philosophy was formed during the French and Indian War. Just as in the Revolutionary War, Washington faced a foe that enjoyed numerical superiority, at least in men-in-arms. Washington therefore concentrated on keeping his force as a “force in being” and started to develop an appreciation of how intelligence could be used to even the odds against a numerically (and sometimes materially) superior foe.

This is in part because his record of command had a very shaky start.

Washington took about 400 troops into the wilderness, and despite being greatly outnumbered in total, decided to pick a fight with a small French advance contingent even though technically England and France were not at war.

After surprising and overwhelming the French advance guard, Washington retreated to his main camp, called Fort Necessity, a rickety compound of upended logs dug into the shallow earth, with the appearance of a ten-foot privacy fence.

Here the French soon approached with a force that was both numerically superior and materially superior.

The fort was poorly situated in a clearing that was too near to the forest. The forest gave the French cover while Fort Necessity offered only American soldiers a mud hole while it rained on them steadily. Much of the powder Washington had in the fort was spoiled from the wet. In an eight hour battle, the French finally compelled Washington to surrender the fort under terms that narrowly allowed him to avert total humiliation, although they were humiliating enough. Half-King, ostensibly Washington’s ally, mocked him by calling the fort “that little thing upon the meadow.”

The next day, Washington marched out of Fort Necessity and surrendered the fort to the French. The French promptly burned it to the ground.

But the date that became important for Washington to celebrate in future years was July 3rd, not the 4th. And not because that was the day the Declaration of Independence was actually signed. It was approved on July 4th, and signed at later dates.

As historian Fred Anderson notes: “Indeed, in a letter Washington wrote on July 20, 1776, as he awaited the British invasion of New York, he made no mention of the independence proclaimed two weeks earlier, but noted only his ‘grateful remembrance’ of ‘escape’ at the battle of Fort Necessity on July 3, 1754.”

There are a number of great firsthand accounts of George Washington during the French and Indian War, but I highly recommend Anderson’s The War That Made America and George Washington: A Life by Willard Sterne Randall. Randall’s is an especially absorbing, complete biography of a great man.

"Like" me on Facebook and you'll get a sneak peek of columns and, as an added bonus, I will never raise your taxes. Send me email and I just might mention you on Sunday.