The Economic Illiteracy – or Lies- of the Huffington Post 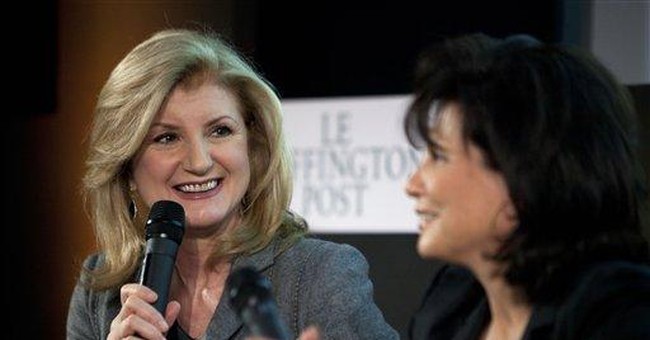 You’d think when the Huffington Post’s top writer on finance writes about the tax code, he’d understand at least how the tax code works. But in an age when “finance” editors, like the HuffPo’s Mark Gongloff, are demonstrably anti-business, pro-Occupy and work as shills for progressive ideas, facts take a back seat to ideology, outrage and agendas.

The latest outrage Gongloff has taken issue with is how little of the U.S. tax revenue, on a percentage basis, is generated by corporate taxes, as opposed to the good old days of the 1950s.

He even has a chart to prove it “What this shows,” writes Gongloff, “is how dramatically corporate tax contributions have shrunk in the past several decades, and how our personal taxes have risen to fill the gap. Payroll taxes now make up 35 percent of all federal government tax receipts, up from 11 percent in 1950. Corporate income taxes, meanwhile, now make up less than 10 percent of federal revenue, down from about 26 percent in 1950.”

The chart actually shows none of that.

While technically it’s true that corporate taxes as a percentage basis have gone down, individual taxes aren’t going up in order to fund tax cuts for corporations. Corporations are generating more tax revenues then they did in the good old days, in fact.

Payroll taxes are going up because programs like Social Security and Medicaid-Medicare-which are funded by payroll taxes- are growing faster than any other area of the government budget.

In other words, the “garbage in” in the guise of payroll taxes is growing because social insurance programs, like Social Security, are sending the “garbage out” in the form of higher expenses for an aging population.

And as even Gongloff acknowledges in a later update to his story, “[the] chart of course does not reflect the fact that employers typically cover half of the payroll taxes collected by the government. Assuming companies pay half of the payroll taxes in this chart, the total tax burden for individual Americans is reduced to about 63 percent of total federal revenue, instead of 81 percent, as I estimated in an earlier version of this story. But that is up from about 45 percent in 1950.”

Gongloff doesn’t understand how payroll taxes work apparently- or as liberals would say, he doesn’t care.

Payroll taxes are part of employee benefits. The taxes are insurance payments that go to Medicaid and Medicare and Social Security. So, he’s wrong in a couple of areas.

First, to the extent that payroll taxes are an ordinary part of labor costs, workers pay the entire cost of these taxes. And they should, since the taxes pay for benefits that go directly to those workers, generally speaking.  But for every dollar in benefits it’s fewer dollars that can go to hire new workers.

But he’s also wrong about corporate taxes in general.

Corporate taxes in real dollars, regardless of the tax rate today, dwarf corporate tax collections from 1950.

And this is why conservatives have the superior argument when it comes to tax policy: Unlike Obama and his progressive “fairness” doctrine, most Americans think that tax policy should generate the most revenue with the lowest tax rates. Common sense dictates that one should get the most benefit for the least cost.

Just think how much money the government could generate if corporate taxes were set lower and were paid by companies rather than set high, as they are now, and avoided by companies.

After all, companies have a choice still of domiciling in another, “fairer” tax jurisdiction- and they always will have that choice.

Maybe, like most liberals, Gongloff doesn’t know any better:

“And Rand Paul is kind of right, you guys, as is Tim Cook [of Apple],” he concludes. “We should not be so mad at Apple for doing what the law allows. We should be mad that the law allows Apple and other companies to keep billions of dollars of cash offshore and out of the government coffers, where it could be helping the unemployed and our crumbling infrastructure and such.”

Once we solve that “and such” part, the big money will really come rolling in.

But really: Who will do a better job creating jobs, returns for investors, products and services that people like?

Apple Computers or the federal government?

I know the answer and so do you.

I suspect that Gongloff knows better too.

But like most liberals don’t, I suspect, he just doesn’t care.