Vacant Buildings Now Cost Half Billion Dollars Plus, But Who’s Counting? Not the Government 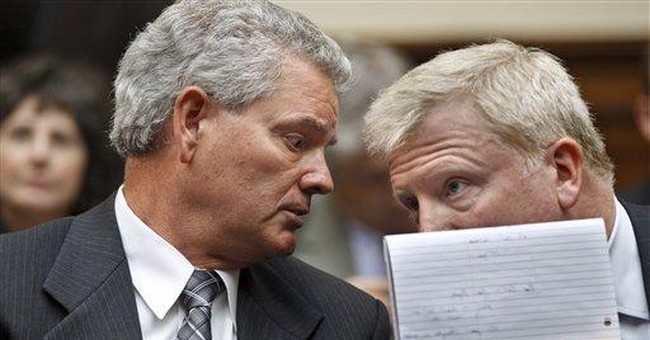 Two weeks ago I reported on the $250 million real estate boondoggle by the General Services Administration whereby the GSA is moving the Coast Guard out of an existing, below-market lease at the cost to taxpayers of $250 million dollars.

Today I’m reporting on another, MORE EXPENSIVE real estate boondoggle by the GSA, which leads me to believe that if Congress is really serious about making real cuts to federal expenses that they can start with some easy cuts on federal real estate and personnel costs at the GSA.

That’s because according to the House Committee on Transportation and Infrastructure, the Nuclear Regulatory Commission, in collusion with our friends at the GSA, has ignored their “$38 million authorization by the Committee on Transportation and Infrastructure to lease 120,000 square feet for NRC projected employee increases, and instead [committed] to a lease for 358,000 square feet that is costing taxpayers $350 million.”

Talk about an increase in allowance.

Happy Father’s Day! Hey daddy, can I have $312 million…more?

More disturbing still is that the General Services Administration seems to have no fear that: 1) Misleading Congress, as is the case with the Coast Guard move, will get them in trouble; or 2) Spending a combined $600 million in vacant office space- that we know of so far- at a time when politicians are asking Americans to pay more in taxes, might cause some voters to rebel at the polls.

“The Subcommittee today questioned the NRC and the GSA about their plans to ensure the costs of their previous decisions are minimized,” said a statement released by the House Committee on Transportation and Infrastructure after both the NRC and the GSA appeared before the committee. “During questioning however, it became clear that neither agency had any specific plan in place to fill the NRC’s empty building space taxpayers are now paying for.”

Well at least that’s better than lying to Congress, which could be the less generous way of describing the testimony of the GSA on the lease that was broken by the agency on behalf of the Coast Guard.

As I wrote at the time: “The GSA has suddenly gone all ‘Eric Holder’ on Congress, testifying to the House subcommittee responsible for the oversight of federal real estate that the broken lease won’t cost taxpayers a dime, when in fact the opposite seems true.”

From the Washington Business Journal:

The federal government will be on the hook for at least $30 million in lease payments for the Coast Guard's current Buzzard Point headquarters after the agency moves to St. Elizabeths later this year, according to sources familiar with terms of the agency's lease with Monday Properties Inc.

That would contradict congressional testimony from Dorothy Robyn, public buildings service commissioner for the General Services Administration, who told a House subcommittee May 22 that the federal government has an early termination clause with Monday and will not owe any rent.

Sources say the Coast Guard is allowed to terminate its Buzzard Point lease in May 2015, meaning the government would have to pay the lease term until then. There remains disagreement over how much that exposure would be: Some sources say it would be $30 million, while others say it will be as high as $60 million.

That’s not just Contempt of Congress- or even perjury- that’s Contempt of Common Sense, Taxpayers, Economics and, most likely, at least a minor violation of Einstein’s concept of space-time.

In the best case, it seems, what the GSA is really saying is: “We aren’t liars per se, we’re just really incompetent.”

That’s not surprising, since it’s the standard patter coming from D.C. when anyone wishes to avoid responsibility, solutions, budget cuts or criminal charges.

Fortunately, the acting head of the General Services Administration, Dan Tangherlini, will appear before the Senate on Tuesday for confirmation hearings that one might suppose he hopes will make him the permanent head of the GSA.

Tangherlini, 45, was appointed 14 months ago to help clean up the GSA after a series of embarrassing revelations about mismanagement at the agency, which has seen it’s budget skyrocket from less than a billion dollars to close to $4 billion under Obama.

This will give U.S. Senators some time to separate the wheat from the chaff, so to speak, on reform of the GSA from the very guy now overseeing two notable screw-ups by an agency that influences budget matters for the entire government.

And they should demand some answers to some very tough questions, such as:

If Washington, D.C., especially the U.S. Senate, are serious about reform, budget cuts or even creating savings to spend on their favorite program, this confirmation hearing would be an easy start. Who can’t be against spending half a billion on vacant leased space?

At the very least, it will allow the voters to separate the rhetoric from the merely rhetorical.

And then vote accordingly.