Sooner or later the Federal Reserve will have to turn off the spigot called Quantitative Easing (QE). And the stock market seems to think it’s better sooner rather than later, because you can only go so long with bad news masquerading as good news.

Concern over an early QE exit by the Fed receded early this week as the U.S. ISM Manufacturing plunged to 49.0 in May.

Over the last two months, persistent rumors about the end of “riskless-trading,” created under the deluge of central bank created liquidity, have translated into a market where the internals breadth and depth do not favor a stock market advance.

You only need to look at a chart of the stock market since the start of the year to see that weakness in the economy far offsets the strength.

People- even stock traders, some of whom are people, I swear- are starting the get the funny notion that the stock market can’t go up indefinitely while the economy slouches around like a Gen Xer, eating all our food, hanging out on the couch and watching reruns of the Suite Life of Zack and Cody.

After finishing down the previous week, the market opened up with brief rally, followed by a sell-off and then around midday, reversed course to close higher than it had on Friday.

That’s not a sign of conviction in the market. 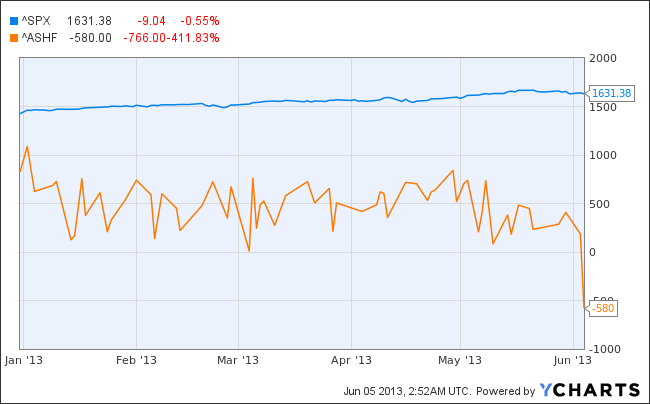 Advance/Decline- in orange- deteriorates over time

As I have said previously, it’s not how you open it’s how you finish. And the market has tried over several weeks to rally, with up days early only to fade and finish down for the week.

The gold bugs are down, but not defeated. With further deterioration in China and Japan, deflation in things- versus assets- is still the story. But it also means that world currencies will continue to stumble. Here’s another case of bad news being good news for the market. But here’s the thing: metals and the stock market are too often trading in tandem. That tells me that most of the upside in assets, like gold and the stock market has been inflationary rather than a reflection of the creation of real economic value.

Another danger is oil. It’s almost as if the governments around the world want oil prices to remain high for some unaccountable reason? The number one danger to our economy and the market is oil prices. Pay careful attention to any move over $100 per barrel. It used to be we had leaders who understood that cheap energy was good.

Watch the finish this week, because the market faded early, but internal numbers show a weakening market like hurricane that just made landfall. The Fed will continue to pump oceans of money at the market- at least for the time being- so the market still could strengthen, but expect at least a small downturn as the market corrects with a whimper and not a bang.

The market expects that one way or another the experiment in Quantitative Easing is coming to an end, and the market is deciding to end that chapter in the way they want, not how the Federal Reserve wants.

That this comes despite Bernanke not having yet reached his oft-stated goal of 6.5 percent unemployment show too that these here markets are still mostly, kind of, um…free.