Self-Proclaimed Union Thug Vinny Castaldo Wants to Beat Me Up

John Ransom  |  Feb 02, 2013
The opinions expressed by columnists are their own and do not necessarily represent the views of Townhall.com.
Top Columns
Trending on Townhall Media

Perhaps it was the radio segment that I did this week asking for comments and feedback about unions. I asked on the air for people who were union members to call our listener line at 202-681-1732 or email us at ransomnotesradio@gmail.com.

I was looking for comments about the good and bad that goes along with being represented by unions.

Still looking for comments, and now want them even if you don't have a union.

Personally I think unions are outdated relics of an age that belong more to Stalin than to Dickens.

Or maybe it was the Facebook picture I posted about unemployment: 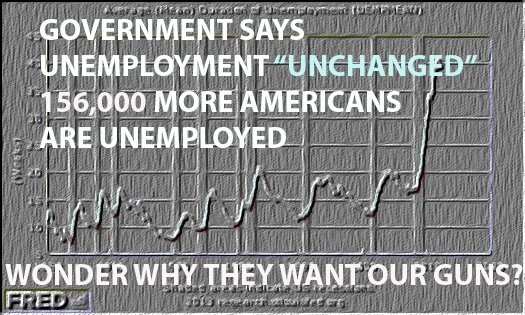 But imagine my surpirse when I get this message from presumed union organizer Vinny Castaldo? 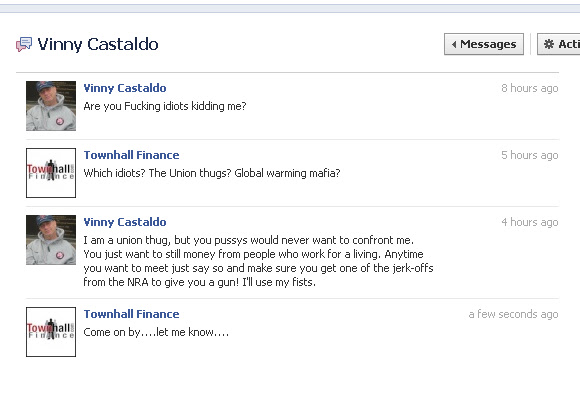 Now I went and checked and the only union thug I could find named Vinny Castaldo worked for the Westchester Unit 9200 of the Civil Service Employees Association as an "organizer."

In the union newsletter that I found him perhaps featured in here's what he had to say- of of course it was him:

"CSEA Organizing representatives [Jose M. Schiffino and Vinny Castaldo from CSEA Organizing] are researching employees that work for Westchester County and are not represented, and trying to get information to avoid layoffs and for future contract negotiations. We will be visiting your worksites, and please feel free to speak to us. They can be reached and/or visit sites at any time of the day that employees have shifts. Please call (800) 342-4146, ext. 1400."

I'm not sure that this is the same Vinny Castaldo as on Facebook, but if it is I'd like to invite him out- along with his whole crew from the CSEA Unit 9200-  to a Townhall in Colorado where we can debate the issue of unions, gun and money civilly, without the use of fists or firearms.

Let's ask him nicely to RSVP.

I'd love to show him Colorado.