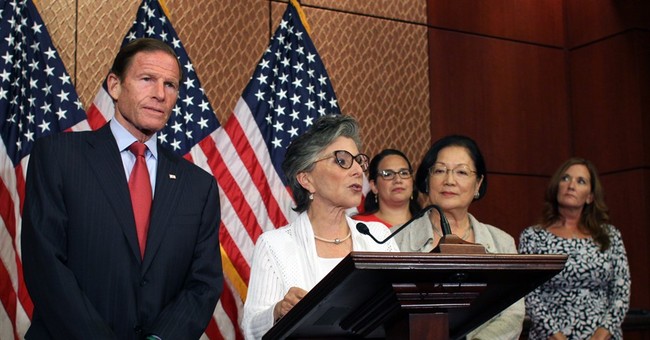 Elizabeth Warren may think it’s over because the vote to defund Planned Parenthood failed, but believe it, it’s not over. The Planned Parenthood videos have marked the beginning of the end of over 40 years the Democratic Party has pandered, deceived, and bullied the issue of life and choice.


Because the Vietnam war was ending and the DNC had no cause celebre with which to inflame voters, Roe v. Wade’s conferral of a new Constitutional right gave Democrats the wedge to push for what the Roe court never envisioned: the abortion of third trimester, viable infants up to term. Just as no man had a right to enslave another, most women knew they should not, by virtue of gender alone, possess total life and death control over a viable fetus inside them. But the Democratic Party shouted otherwise, and in part, the issue helped give us Jimmy Carter in 1976. In the name of newfound Women’s Rights, sadly, some heard the call not for rights over their bodies, but for freedom from responsibility for their bodies.


One way the party tried to mask Roe’s act was not to call it what it was. Early on, it was “getting rid” of something, according to Joseph Dellapenna’s seminal work, Dispelling the Myths of Abortion History (2006). A woman was “helped out of trouble.” Pro-choice issue managers have called the fetus a “parasite” or even, Dellepenna says, a “spinal animal,” and Carl Sagan referred to fetuses variously as “parasites,” “worms,” “reptiles,” and “pigs.” Obstetricians began to note, the author said (p. 926), that when a woman wanted her pregnancy, it was a “baby,” but if not, it was “a product of conception.”

Though not valued as human life by Sens. Warren, Reid, Sanders, and Clinton, those spinal animals had value to Planned Parenthood as the videos so gruesomely demonstrated. And as described and discussed, these weren’t merely masses of embryonic tissue, but likely well-developed, possibly viable humans that PP was marketing for sale, in whole or in part.


No longer will most American women and men tune their ears to the rhetoric of people like Sens. Warren and Reid, as the latter spoke about denying “your daughter, wife, or sister” the right to reproductive healthcare, or when Sen. Warren claimed that Republicans were taking us back to the 1950s and the 1890s. A la Clinton’s shabby claim of a War on Women, Warren all but shrieked on the Senate floor, “The Republican vote to defund Planned Parenthood is just one more piece of a deliberate, methodical, orchestrated, right-wing attack on women’s rights, and I’m sick and tired of it.”


You, Sen. Warren? You’re sick and tired? According to the most reliable data available, some 56,000,000 abortions (through 2013) have been performed since Roe, and that’s a number to be truly sick about. In fact, that number may be low since at various times, states like California and Maryland and others did not fully comply with CDC reporting tools. Sicker still is that according to the Guttmacher Institute, “40% of minors having an abortion report that neither of their parents knew about the abortion (AGI).”


Let’s see what that 56,000,000 holds within its millions of digits, of hearts, and livers, to be shilled and sold like so much of a butcher shop’s trimmings. About 90% of those abortions involved gestations of 13 weeks or less, but anywhere between .9 and 1.2% of abortions every year were at the 21-week mark. Using 1% on average means that about 560,000 infants’ lives were terminated at or just before viability (around the 26th week).


Science says the heart begins to beat before an embryo’s 20th day of existence. At around the 14th-15th week, the fetus squints, grimaces, frowns, and turns from light. The heart has been beating for nearly three months. For discussion’s sake, using 2011 CDC data, about 8.7% of all abortions occurred at 14 weeks or later, which means that since Roe, approximately 4,872,008 heartbeats belonging to Michaels, Emmas, Olivias, Joshs, Matthews, and Sophias have been forever stilled. Now, that’s sick.


The Planned Parenthood videos described in detail how the Michaels and Sophias were to be evacuated and saved for PP plundering. They showed what low state of Dr. Mengele-like bargaining can occur when there’s no thought to the humanity ripped from nature’s nesting place. No one was brave enough, it appears, to tell us how many of the 560,000 babies aborted over the past 42 years were at a stage of full viability. How many murders per day does that become? This much is known: if the ticking clock of the Minnesota Citizens Concerned for Life is accurate, 3,304 abortions occur every single day, nearly all of them with a beating heart choked into silence—every day.


Though God himself stilled Abraham’s knifehand over Isaac, the strategy of Democrats like Warren, Reid, and Clinton over the past 40-plus years has been to endlessly assert a woman’s right to kill, at will, her viable infant, and to bully every opponent into silence for fear of being politically incorrect. As the POTUS candidate in Turnover says, “It’s not about women’s rights. It’s about human rights.”


So little have Democrats truly respected women—why should they when their greater respect for life has to do with the well-being of death row residents?—that they simply assumed claims of a renewed War on Women, a new Attack on Women’s Rights, or another alleged attempt to deny access to reproductive health care would marshal feminine forces once more to the progressive banner.


No more, Senator. One suspects that most of the public will soon insist the charnel house butcheries of Planned Parenthood be funded by the likes of the Clinton Foundation, not the rest of us.
Brian Laundrie Now Missing After Being Named a 'Person of Interest' in Fiancé Gabby Petito's Disappearance
Landon Mion
A New Poll Shows McAuliffe and Youngkin in Tight Race for Virginia Governor
Madeline Leesman
GOP Reps Demand More Briefings on Afghanistan: ‘This Withdrawal Has Been An Unmitigated Disaster'
Madeline Leesman
House Dem Campaign Chair: We Need to Stop Mentioning This $3.5 Trillion Welfare Bill We Want to Pass
Matt Vespa
96 Percent of Kentucky School Boards Vote to Retain Mask Mandates
Landon Mion
In These Districts, Joe Biden Is Becoming Radioactive
Matt Vespa