Johnny Kampis
|
Posted: Jan 19, 2021 11:11 AM
Share   Tweet
The opinions expressed by columnists are their own and do not necessarily represent the views of Townhall.com. 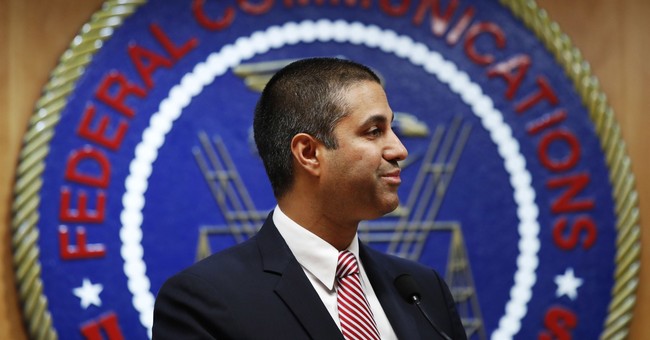 Federal Communications Commission (FCC) Chairman Ajit Pai made impressive gains during his four years in the role and his legacy will likely shine in protecting taxpayers and closing the digital divide with continued broadband growth years after he leaves office.

After announcing in December (as is customary for an FCC chairman), Pai will depart from the FCC on January 20 so the incoming Biden administration can appoint a new chair.

The Wall Street Journal opined recently that Pai’s greatest contribution in his role was eliminating Title II regulations. The onerous Title II regulations, which were put in place by former Chairman Tom Wheeler during the Obama administration, gave the government more power and put more restrictions on internet providers.

“Progressives accused Mr. Pai of ‘breaking the internet' and destroying democracy,” the WSJ wrote. “Some even threatened his family. Miracle of miracles, the internet and democracy survived.”

The left framed the issue as “net neutrality,” arguing the regulations would prevent providers from blocking websites or throttling traffic, ultimately a solution in search of a problem. Taxpayers Protection Alliance discovered during an investigation that it continued to not be an issue, as an open records request showed that the FCC received scant few complaints about providers blocking or throttling after the Title II regulations were removed.

The FCC under the new administration will likely move quickly to restore those regulations, despite no clear rationale to do so. It’s difficult to argue that broadband hasn’t seen impressive gains under Pai after the fall of Title II. Speeds are up and connections are more prevalent after significant increases in infrastructure development in the past few years.

While bandwidth-heavy sites like Netflix and YouTube were asked by European regulators to throttle speeds during the pandemic, the American internet continued to run smoothly even though more people worked and entertained themselves from home.

“I think the results speak for themselves,” said Evan Swarztrauber, policy adviser at the FCC. “Our networks held up extraordinarily well during the challenges presented by the COVID-19 pandemic.”

While Title II was one of Pai’s first major policy decisions and the one that received the most attention by the media and the left, other moves should yield positive benefits for broadband in the long-term. His work freeing up spectrum for use in the advancement of fifth generation wireless networks or “5G” is giving a jolt to the next generation of wireless technology.

Pai pried prized spectrum in the C-band from foreign satellite operators, yielding not only more bandwidth for American internet growth, but also tens of billions of dollars for the U.S. Treasury. He tapped into spectrum in the 5.9GHz range that was set aside for unused car safety technology to boost Wi-Fi strength. That was key during the pandemic as home broadband usage increased.

“That’s been a major focus of the chairman, to get as much spectrum freed up for use by providers to benefit the American public,” Swarztrauber told TPA.

To the consternation of money-hungry municipalities, the FCC under Pai limited how much cities and other localities could reap in fees for the installation of 5G small cells. The technology was being hamstrung by exorbitant fees charged by some local governments, particularly onerous because the next generation of wireless requires a greater density of cellular infrastructure than previous generations.

A repeal of that initiative is among the items that will likely be taken up by a Democratic-majority FCC in the next year, leading WSJ to say, “Mr. Pai is leaving the country with a faster and stronger internet. Let’s hope Democrats don’t break it.”

In March, as COVID-19 began to spread widely across the U.S. and people were forced to stay home – many of them losing their jobs – Pai implemented the “Keep Americans Connected” pledge. He challenged providers to keep citizens connected to the internet, regardless of their ability to pay. Most ISPs followed Pai’s lead.

What may prove to be Pai’s greatest long-term contribution to American society, and one that anyone could hardly find political fault with, is the creation of 9-8-8 as a suicide hotline.

It’s been a strong four years at the FCC under the leadership of Pai. Let’s hope the next administration will not undo much of the positive work accomplished by the outgoing chairman.  The FCC has a unique job to continue to close the digital divide while protecting taxpayers.