John Nantz
|
Posted: Jan 07, 2016 12:01 AM
Share   Tweet
The opinions expressed by columnists are their own and do not necessarily represent the views of Townhall.com. 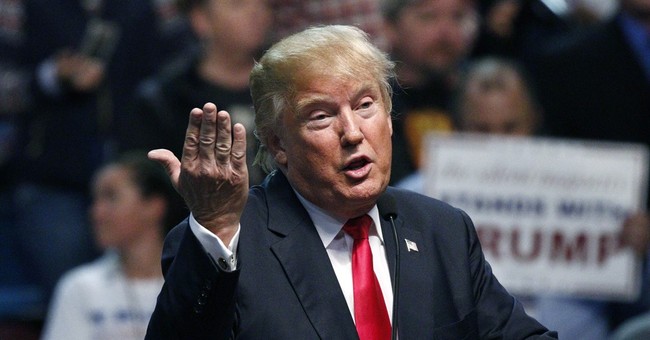 Donald Trump is a litmus test, but not in the way most conservative pundits have pronounced. One’s opinion of him isn’t dispositive of party allegiance, of theoretical purity, or least of all—intellectual acumen. What is lost in the entire deranged furor is that the critics themselves threaten the democratic process and destroy their own credibility as they sink to sophomoric tantrums, which erupt like angry pimples reddened by the stresses of unrequited adulation.

Many conservative pundits have fallen prey to a cult of personality composed of a constellation of infotainment industry celebrities who adhere to a strange new dogma—a theory of political correctness formulated and imposed by self-styled right wing masterminds, a tittering clique as divorced from commonsense America as their Rockefeller Republican overlords. It is a shockingly dangerous establishmentarianism and a monstrosity of contradiction. Media enforcers opine behind golden locks, vaguely insincere smiles, and stabbing eyes that flash with a barely contained lust for ratings, advantage, and applause.

Trump is abused on a number of playbook issues. He’s painted as a wolf in sheep’s clothing, a sulking Democrat waiting to pounce. Robber baron caricatures aside, at the heart of this criticism is the assumption of duplicity. Unlike the shape-shifting Obama or the matronly bungler Hillary Clinton, Trump hasn't garnered a reputation for being a liar.

His past is an open book and the hallmark of his present is an honesty of expression that is painfully acerbic. He has been criticized for praising Obama's "stimulus" package, among other calumnies, which doesn't seem to give Trump supporters pause. The reason for this is simple enough for anyone not angrily grinding an ax over a spinning sharpening wheel. Trump has witnessed the calamity of Obamanomics and has been led to a closer analysis--coming to the conclusion that Obama is an unmitigated disaster. He arrived at his conclusion the way many Americans have, through the painful experience of socialist policy. Trump makes no excuses and garners respect and loyalty because of this organic authenticity. The flaws make him real to many thousands of Americans—he’s the antipode of the manufactured politician.

Critics also like to point to Trump’s allegedly insincere promise to not run third party as an example of his dastardly character. But, Trump’s negotiation of that deal was always conditional on fair treatment by a notoriously treacherous RNC. Trump put this issue to rest by stating plainly that he would not run third party.

Oddly, Trump is both criticized for his frankness and pilloried as a double agent. Chattering pedants seem to forget that you can't have it both ways. Is Trump a liar or a simple brute lacking a practiced politician's sophistry? Masses of Americans are responding to the actual Trump who's visceral honesty is refreshing and abundantly reassuring. On any issue, Trump has cheerfully embraced honest debate, reserving his vitriol for the rhetorical sucker punches launched by GOP apparatchiks, glitterati dupes, or liberal dolts.

Worst of all, Trump and his supporters are routinely maligned as a rabble driven by passion and excited to a frothy mania by the totem of Trump's personality. Usually, this sort of sputtering mendacity is wielded by the likes of Chris Matthews or some other liberal media sewer-dweller. However, when the Fox News pantheon of debutants and lettermen howl with disdain, many conservative demi-gods peck out hate pieces in ironic reflex to the power of pop personality. It is grotesque and untoward. It is the height of arrogance to malign thoughtful and sincere conservatives whose passions are informed by principles and issues to which Trump speaks with clarity, specificity, and conviction.

Trump supporters are people who subscribe to his substantive positions on taxation, immigration, national security, and Second Amendment issues. Trump has spoken with an unmatched boldness on the great issue of our time--Islamic terrorism. He has shattered the mainstream media's template and set the recalcitrant and traitorous GOP afire with the match of simple, unapologetic patriotism. He has single handedly set the course of public debate on issues which the establishment media and political class are too cowardly to comment.

He inspires with a deceptively simple slogan, "Let's make America great again,” which echoes the rallying cries of “American exceptionalism” and “rugged individualism.” This is what really offends the professional political and news class. Trump celebrates the citizen, the men and women who function outside the D.C. beltway and belittles the members of the bureaucratic leviathan that seeks to consolidate all power. And, he eschews the self-appointed arbiters of political legitimacy in the media.

The smart guys in the room, like Rush Limbaugh and Mark Levin have been thoughtful, patient, and prescient in their handling of Trump. Levin has interviewed Trump on several occasions, posited thoughtful and substantive questions and received thoughtful, complete, and eloquent responses. It is instructive that the men at the pinnacle of conservative thought have been the most deferential, not so much to Trump but to the process that belongs to the American people—the Republican primary. They have treated Trump seriously and served their listeners by presenting each candidate in the light of reason instead of casting them in the tawdry disco ball pallor of pop politics. And, wisdom would counsel neophyte scribblers to give place to long experience and battle-tested knowledge. Both Limbaugh and Levin recognize that Trump is flawed, as all the candidates are, but the critical difference is that these two consummate professionals understand that the process deserves a serious and measured analysis of each candidate. A political Mardi Gras hosted by supercilious moderators does not serve the voting public.

Recently, Mark Levin asked his listeners about the very first question posed to the Republican candidates in the first debate, which was contrived by Fox News. The candidates were asked if they would support the Republican nominee regardless of who that person might be. All but Donald Trump assented. He was excoriated for failing to consent. The irony of that moment is that many of those who lambasted Trump for his answer now threaten their eternal ire should Trump become the Republican nominee.

In all the madness for ratings and adulation, the primary process is trampled under foot and the American people are deprived of their opportunity to hear and observe the candidates in the act of responding rationally to serious questions, they are denied the opportunity to assess strengths and weaknesses of character dispassionately, and are robbed of dignity when a burning desire to win becomes a convenient euphemism for “the ends justify the means.” Donald Trump may or may not be the best candidate, but that isn’t a decision that should be made for us.