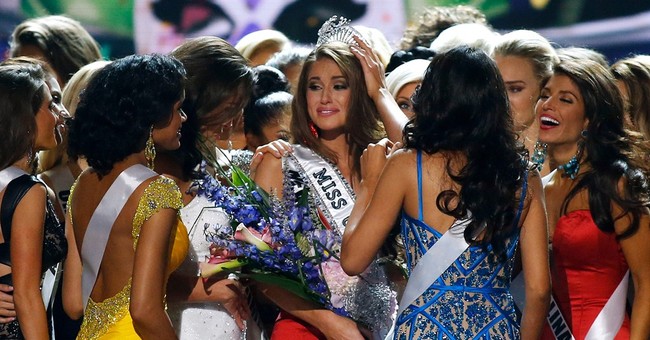 What woman doesn’t cringe at the thought of walking alone out into a parking lot, heavy with shadows made black by the hard gaze of humming floodlights. Dread tickles the small hairs on the back of the neck as fingers grope clumsily for a set of keys playing catch-me-if-you-can. From the blindness behind, shoes scrape bits of loose gravel and evil descends.

What happens next depends.

If you’re a student of feminism, you’re already a victim, a sheep left to bleat against the vicious instinct and unyielding fangs of the wolf. Feminism’s doctrine of victimhood, its destruction of courage, and its reliance on a paternalistic state, strips women of power and makes them the easy prey of sexual predators who aren’t deterred by the notion that “it’s bad to rape.”

Miss USA Nia Sanchez is a powerful woman, but not in the feminist sense. Sanchez’s power is derived from her independence. She is a self-possessed woman who does not look for validation from a silly circle of nattering hens—feminists. Sanchez has dared to think independently, rejecting the proposition that she is powerless apart from the meddling of the state. She is a classic American woman who knows that she is fully capable of meeting whatever challenges confront her and that, ultimately, she is responsible for the content of her destiny.

Liberal feminists are terrified of independent and powerful women because feminism is a totalitarian doctrine and, as such, requires a constituency of servile automatons. People infused with an independent and rugged spirit don’t make pliant serfs.

Feminists would rather see women powerless before predators, so long as they are submissive to feminism’s edicts and hierarchy. This is precisely why Miss Sanchez is attacked with so much acerbic nonsense. Sanchez doesn’t need feminism, she’s found the strength of the American spirit—rugged individualism.

The point here is that a woman should feel free to make up her own mind regarding her response to rape. For feminists to criticize Miss Sanchez for her decision to engage in a course of training that has provided for her a sense of confidence and self-reliance is painfully ironic. However, irony abounds when liberals are confronted by the implacable realities of life outside the bubbles of academe and the beltway.

Additionally, the fact of rape makes one of the strongest arguments for women training with and possessing firearms. The firearm is the great equalizer. Given the typical disparities in size and strength between men and women, a woman would most benefit from the defensive power of the handgun. Despite the clap-trap from the establishment media, the handgun is primarily a defensive weapon. It is a tool of power and, therefore, feared by the proponents of big government. But, in trained hands, it is the most immediate and efficacious resource of self defense for a woman. In many cases, merely brandishing a firearm, when legally appropriate, is enough to end a violent encounter.

Miss Sanchez made the decision to dedicate herself to decades of training and study to achieve a 4th degree black belt. She takes her place in a long line of female martial artists who have found a great sense of personal achievement and confidence in pursuing a discipline. Rape is a tragic fact and the notion that encouraging women to defend themselves somehow admits to a degree of blame in the encounter is an absurdity that only finds legitimacy inside the twisted maze of the liberal mind. It’s the old pacifist lie that posits that resistance to violence only begets more violence and, therefore, stains the victim with a degree of culpability. However, this is typical of liberals who are forced into intellectual contortions bordering on the pathological, in hopes of twisting their fantastic narratives into the fabric of reality.

Conflict between two determined individuals usually produces victor and vanquished. In the case of rape, it can only be described as virtuous to encourage women to equip themselves with whatever capability they deem necessary to emerge victorious.

Miss Sanchez is attacked by rabid feminists because she represents the rugged individual and invalidates the servile, feminist doctrine of victimhood. Women like Sanchez are cut from the same cloth as Joan of Arc, who know that it is their moral duty to oppose evil where they find it, to combat it and to not acquiesce.

There is no moral culpability in that kind of resistance win, lose, or draw. There is only virtue in resisting the evil in humanity; it may not be just your life that you are fighting for, since predators rarely seek for a single victim. Miss Sanchez ought to be lauded as an exemplar of dedication, confidence, and courage. But, these virtues are not characteristic of feminism, which only lurks to gather victims to itself.