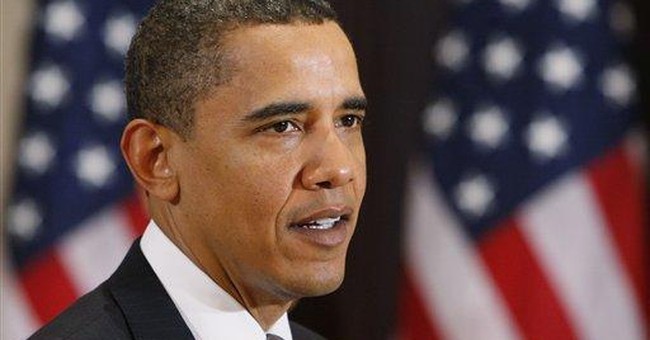 As downsizing continues in journalism, it's difficult to find a top-notch White House correspondent who can get the facts straight when filing a White House pool report, as in the one this week: "Correction: The UN seal was on the podium, not the presidential seal. And it's Elmo, not Elmer, on Sesame Street."

As attempted, unsuccessfully, in previous congressional sessions, a pair of pro-English language bills were introduced in the Senate this week, one by Sen. James M. Inhofe, Oklahoma Republican, to declare English as the official language of the United States while establishing a uniform English language rule for naturalization.

In addition, Mr. Inhofe and 14 other senators offered a bill to amend the United States Code to declare English as the national language of the U.S. government.

No wonder there are so many opponents of making English the official language of the United States - a million words are difficult to learn, not the least being "obamamania."

Now we learn that the English language, which currently stands at about 999,500 words, will pass the "million word" mark on or about June 10, according to the Global Language Monitor (GLM). The latest words under consideration: defollow, defriend, greenwashing, chiconomics and noob.

In William Shakespeare's day, according to GLM president and chief word analyst Paul JJ Payack, there were only 2 million speakers of English and fewer than 100,000 words. Shakespeare himself coined some 1,700 words.

"Second, a geographic explosion has taken place where some 1.53 billion people now speak English around the globe as a primary, auxiliary or business language. And, three, English has become, in fact, the first truly global language. Never before has a single language had the extent and influence as that of English."

Noob, by the way (often spelled and pronounced as nooby or newby), is short for a newcomer to the Internet.

Former Senate Majority Leader Bob Dole of Kansas, who with hundreds of others in the nation's capital today is mourning the passing of his former vice presidential running mate Jack Kemp, may be approaching his 86th birthday, but the political fire still burns in his belly.

"Some days when I watch C-SPAN," the one-time Republican leader told the Topeka Capital-Journal newspaper, "I wish I were back."

In recent days, a woman telephoned one of Washington's more famous senior citizens, 97-year-old Roberta McCain, the mother of two-time Republican presidential candidate Sen. John McCain, and invited her to a church function in suburban Maryland.

The woman, who does not wish to be identified, assumed Mrs. McCain would be driven by somebody else to the church. Just about the time the event was to begin, a car carrying only one person rolled into the church's crowded parking lot "and out popped Mrs. McCain - and she ran, in 2-inch heels, to the church."

Those looking on were "astounded," says our source, especially when Mrs. McCain, whose vigor and zest for life is well-documented (Mr. McCain says his mother still runs circles around him), explained that she "got real lost" on the way to the church, but finally found it.