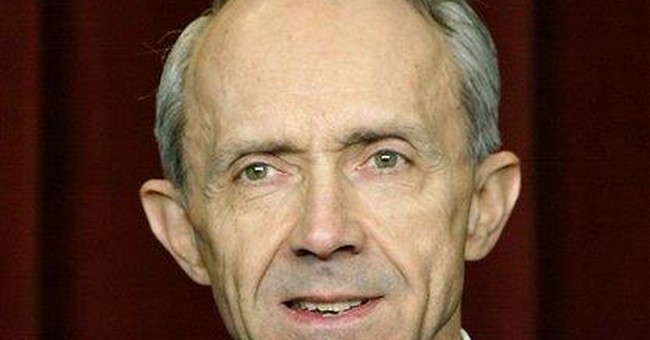 Not surprisingly, after two decades on the U.S. Supreme Court, Justice David H. Souter has announced his pending retirement at age 69. He longs for the calm and serenity of his longtime New Hampshire home. Can you blame him?

Practically every story written about the Justice Souter in recent days has recalled that he has not liked living in Washington, that he purposely avoids the social circuit, preferring the privacy of his spartan apartment on Capitol Hill.

We might recall when the "crime emergency" was declared in Washington in 2003, which only got worse in 2004. Wouldn't you know, on the last day of April that year Justice Souter was attacked and beaten by an angry group of thugs while merely jogging along the safer streets of our capital city.

Seemingly in no time, cancer has consumed the remarkable life and career of a former football star and politician whose kindness and generosity this columnist won't ever forget.

Jack Kemp was a serious contender for the 1988 presidential nomination when he embarked on a fact-finding trip to Central America, where he huddled, covertly speaking, with Contra rebels in the remote jungle of war-torn Nicaragua.

This columnist was one of a handful of writers accompanying the congressman from New York on his tour, and on the return flight to Washington there came an occasion when he inquired about my family. He was intrigued to learn that my father, Robert, who shall soon turn 92, was an FBI agent for 37 years under J. Edgar Hoover.

He listened as I recalled numerous tales told to me by my dad of World War II-era espionage and counterespionage - including how my mother, Wanda Larson, once went "undercover" for Mr. Hoover in the days before he allowed the bureau's women the worthy rank of "agent." (Fortunately, she traded in her FBI badge for motherhood).

Two days after the trip, I was surprised when a handwritten letter addressed to my father arrived at the McCaslin family home. Mr. Kemp wrote to say that he was sitting in the darkened forward compartment of his chartered airplane, returning to the nation's capital from a less than cheerful journey to Central America, and before time consumed his busy schedule again he had wanted to thank my father, who was long since retired, for his many decades of service to the country.

And then, speaking as the father of his own four children, he wanted my dad to know that he had done a fine job of raising his son.

Inside the Beltway was on hand at the Birchmere in Alexandria to see the newly retired Sen. John W. Warner, Virginia Republican, take the stage with his successor, Sen. MarkWarner, Virginia Democrat.

The pair once went head-to-head for the same Senate seat.

Mr. Warner, the Democrat, got the audience laughing by recalling that he'd recently been "unemployed" and approached his former foe for some job tips, only to hear the Republican say "you ought to apply for my job."

"John said that it was a lot like going to camp, that you dress every morning in your uniform, divide into two sides and play 'catch the budget,' " the Democrat noted. He went on to praise the retired senator, pointing out that Her Majesty Queen Elizabeth of England recently crowned the Republican "Sir John" - honorary knight of Britain.

"Where was that speech in '96 when you ran against me?" the elder Mr. Warner quipped.

Is all of Hollywood seated with CNN at last weekend's White House Correspondents' Association (WHCA) Dinner?

Politicians or celebrities, everybody this year is scrambling for a ticket to the first WHCA dinner honoring President and first lady Michelle Obama.

Privileged residents of the quaint villages and towns of Fauquier County, Va., take notice: For centuries, you and your ancestors have been mispronouncing "faw-keer."

Yours truly on Saturday night shared a bottle of wine at Eve restaurant in Old Town with Julie A. Fauquier, whose distant relative Fauquier County was named for when it was founded in 1759.

A wine buyer and consultant living in Bass Lake, Calif., Mrs. Fauquier is a descendant of Francis Fauquier, the acting governor of the colony of Virginia from 1758 until his death in 1768. He was a close friend of Thomas Jefferson.

Mrs. Fauquier assured this writer that the correct pronunciation of her French surname is "foe-key-ae" - therefore, she said in no uncertain terms, the famed horse country of Virginia should be pronounced "foe-key-ae coun-tee."