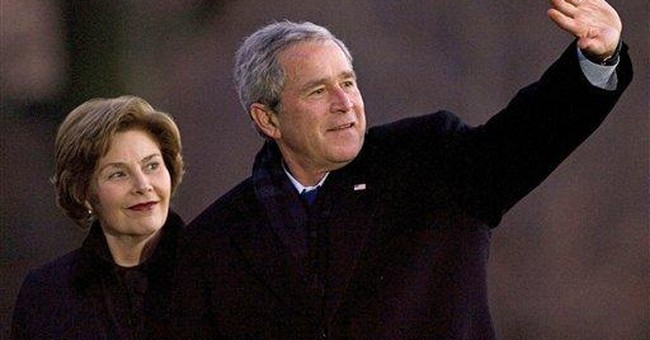 Time it took President Bush once his motorcade arrived back to the White House at 8:29 a.m. Sunday morning to change out of his church clothes and into his biking gear, then depart again by motorcade at 8:36 a.m. for a bicycle outing: 7 minutes.

It was addressed to the Colony High School Knights Marching Band, Alaska's only high school marching band (it's too cold to blow into musical instruments during the autumn football season), directed by Jamin Burton.

"Congratulations! We're pleased to inform you that your organization has been chosen to perform in the 56th Presidential Inaugural Parade," the letter stated. "We had a record number of applicants, so your selection ... will help make this Inauguration truly historic."

Yet, shortly after the congratulatory letter arrived in Wasilla, the Mat-Su Borough School Board voted against granting the 46-member band a $15,000 bailout to cover its shortfall for the trip to Washington.

So Mr. Burton, who had booked the band to fly more cheaply into Newark, N.J., and then be bused to the nation's capital, started several fundraisers. Soon, a Lutheran church in Fairfax agreed to host the band overnight, Alaska Airlines offered to waive some additional baggage fees, and BP Oil provided a $5,000 donation.

Even LaDonna Hale Curzon, executive producer and co-host of the Sarah Palin radio show, is getting support for the band, lining up interviews with Mr. Burton while inviting band members to perform in Old Town Alexandria on inaugural night.

Although it still has several thousand dollars left to raise, the band is practicing in earnest for Mr. Obama's inaugural, even if many of their parents did not support the Democratic candidate. One band booster urged, "Put politics aside and let our kids march with pride. They've earned it."

"One mother called me today from Wasilla," says Mrs. Curzon. "She told me that it was 29 degrees below zero and the kids lips were freezing onto their instruments while they tried to practice. She said that they rented a bus to take them to Anchorage where they could practice indoors at a sports dome facility."

Two weeks until Inauguration Day, and meteorologists should soon have a general idea of the weather pattern for the outdoor festivities.

The Joint Congressional Committee on Inaugural Ceremonies advises in the meantime: "There is no official dress code for the swearing-in ceremonies. It is typically cold on Inauguration Day - normally 37°F - and often wet. Expect to be outside for more than three hours, to stand in line, and to walk for long periods of time. Dress in layers and wear a winter coat. Consider wearing comfortable shoes, gloves, a hat and a scarf, and bringing a blanket."

Former Washington political pollster and communications specialist Frank Luntz has grown a beard, packed his bags, loaded up the truck, and moved to Santa Monica, Calif.

Now we learn he's just finished a new book, "What Americans Really Want ... Really," to be released this summer as a sequel to his 2007 best-seller, "Words That Work."

Mr. Luntz tells us his transition from politics to business has gone well, with more than a dozen Fortune 100 clients and two dozen Fortune 500 clients signing up for his services in 2008 alone.

He still plans to spend one week a month in Washington, and appear regularly on the Fox News Channel, albeit seated before a fake Los Angeles backdrop instead of the U.S. Capitol dome.

During January, one birth will occur every eight seconds in the United States and one death every 12 seconds. Net international migration, meanwhile, will add one person every 36 seconds to the U.S. population.

Altogether, this means an increase in the total U.S. population of one person every 14 seconds.