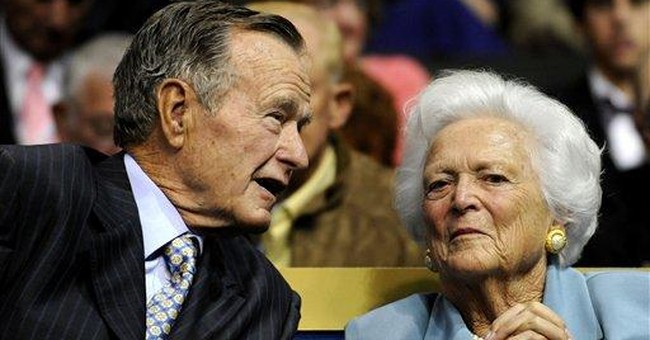 The same high winds that blew into the nation's capital Monday canceled the moving of the delay-plagued aircraft carrier USS George H.W. Bush from Northrop Grumman Shipbuilding in Newport News to the Norfolk Naval Station.

According to the Virginian-Pilot, the Navy and the shipyard now hope to move the $6.3 billion Nimitz-class carrier on Tuesday afternoon in preparation for its Jan. 10 commissioning, just days before President Bush leaves office.

"The carrier is not yet ready to sail, but the Navy did not want to delay its commissioning," the newspaper explains. "A long list of VIPs is invited, including former presidents, top Navy leadership and the Bush family."

Indeed, the large carrier will have to complete its sea trials after the commissioning, and only then - granted the ship is deemed seaworthy - can it be accepted and welcomed into the Navy fleet.

Delivery of the carrier has been delayed three times because of labor shortages and late shipments of materials and commodities.

It's only fitting that the retiring senator who was instrumental in getting legislation passed authorizing the building of the Vietnam Veterans Memorial will be the featured speaker at its 2008 Christmas Tree Ceremony on Tuesday.

Virginia Sen. John W. Warner, a military veteran who counts three decades in the Senate, will deliver his parting remarks at 10 a.m. Afterward, a Christmas tree will be placed at the apex of the wall, decorated with handmade ornaments and cards sent by schoolchildren and Americans from throughout the United States.

Look, it's probably too late in his career for Vice President-elect Joseph R. Biden Jr. to enroll in public speaking training, but it couldn't hurt. The ears of Washington political blogger Howard Mortman were ringing so much after Mr. Biden's most recent round of pontifications to George Stephanopoulos of ABC News that he now wants our eyes to suffer:

"Look, every stakeholder has to get in this deal."

"Well, God willing, because look ... we've got to begin to stem this bleeding here."

"Look, let me start off and define for you, at least, the role that Barack and I have worked out for me as vice president."

"Well, look, there was a lot swirling around before she actually got asked, and so she is an old friend."

"Well, look, I think whoever was president was going to be faced with the same test."

"But look, our goal is to get American combat forces out of Iraq."

"Look, ... the advice that he has given to President Bush ... has not been consistent with our Constitution, in my view."

"Well, look, Barack Obama, candidate Obama, Senator Obama, President-elect Obama has a stellar and outspoken record in support of equality for all Americans, including gay and lesbian Americans."

"Look, we are faced with the first, most critical urgent problem."

"Look, as you know, the exception is becoming the rule here."

"Look, he's attorney general of the state of Delaware."