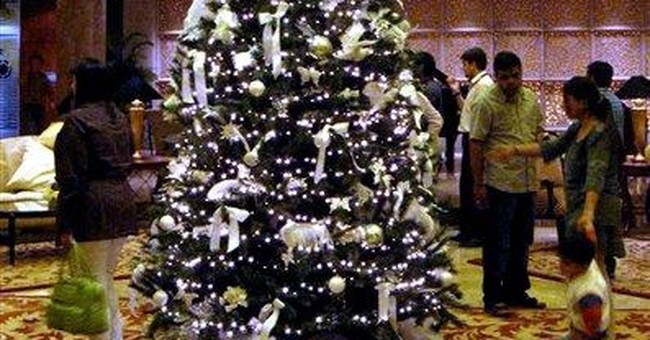 It's time to step down into the basement of the White House for the traditional reading of the holiday poem titled, "'Twas the Night Before Christmas: 2008 White House Press Basement Version," read aloud this year by Salem Radio Network correspondent and distinguished poet Greg Clugston to assembled reporters and guests that included CBS's Bill Plante, ABC's Ann Compton and deputy White House press secretary Scott Stanzel.


'Twas the night before Christmas and in the White House,
Not a creature was stirring, not even a mouse.
Stockings were hung in the West Wing with care,
In hopes that January 20th soon would be there.
The president was asleep, all snug in his bed,
While visions of Texas danced in his head.
Can't wait to leave D.C., so cold and callous,
For the comfy confines of a new home in Dallas.
Barney was napping next to the nightstand,
Eager to bite another journalist's hand.
Both Bushes settled down for long winter naps,
Hoping to avert the automakers' collapse.
What a year it had been, with its twists and its turns,
From Jenna's summer wedding to meltdown concerns.
From the pope's springtime visit and his "awesome" speech,
To the shoe-throwing incident — a security breach.
There were stimulus checks to boost buyin' and sellin',
Then came the book from disgruntled McClellan.
In the campaign, Republicans were bailin',
Bush was kept far from McCain and Ms. Palin.
Suddenly, there arose on the lawn such a clatter,
Dubya jumped up to see what was the matter.
When, what to his wondering eyes did he see?
But a limo coming — from Treasury.
Out stepped Hank Paulson in a red Santa suit,
Complete with white beard and shiny black boots.
He was armed with a checkbook to fix the recession,
Handing out billions for every subprime transgression.
"Now Fannie! Now Freddie! And now A-I-G!
"On Bankers! On Wall Street! And Detroit's Big Three!
"We're pumping in cash for liquidity,
"And boosting long-term viability."
The phone rang inside and Bush answered in time,
A call from Chicago — Obama on the line.
"Sorry it's late. What an imposition."
"No problem," said Bush. "Just part of the transition."
Barack bemoaned Blagojevich; boy, what a creep —
The audacity, the hair, the (bleep, bleep, bleep).
Facing last-minute jitters, Obama needed advice,
The war, the economy, anything would suffice.
And I heard Bush exclaim, without blowing his fuse:
"Merry Christmas to all! Watch out for the shoes!"

Hats off to Rep. Howard P. "Buck" McKeon, California Republican, who has surprised a second group of students — this time from Mesa Intermediate School in his congressional district — with tickets to the Jan. 20 inaugural ceremony.

Of the 198 tickets that were distributed to the congressman, he has now given 72 away to students and teachers so they can witness history firsthand, as he put it. Mr. McKeon earlier presented 40 tickets to a history teacher and students from the Academy of the Canyons in Santa Clarita, Calif.

"I realize giving so many of the inaugural tickets away to students is a bit unusual, but this is a historic time for Americans as we swear in the country's first African-American president," said Mr. McKeon. "I've warned the students about the cold temperatures in Washington, D.C., in January, but I feel certain their excitement will keep them warm."