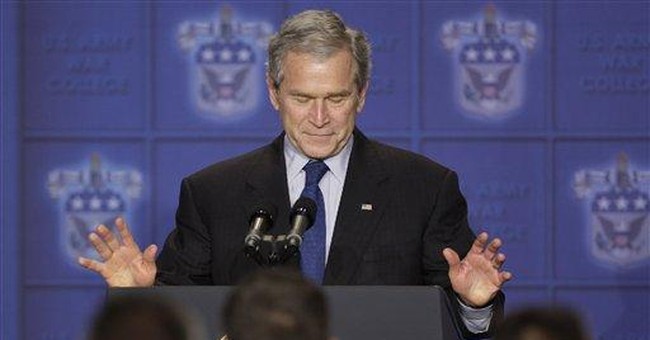 Only now do we learn the story of a former Reagan administration official who can speak firsthand of the significance of the recent shoe-throwing incident in Baghdad, when Iraqi TV journalist Muntadhar al-Zeidi hurled his heavy size-10s at a ducking President Bush.

As Americans are now educated, striking somebody with a shoe is a tremendous insult in the Arab world - the target likened to the dirt beneath the shoe's sole. Mr. al-Zeidi even went a step further, calling Mr. Bush a "dog," an animal considered by many Arabs to be unclean.

About five years ago, this Reagan official who shall remain unnamed joined a group of 15 or so friends at one of the Washington-area's more popular Moroccan restaurants, which to this day features belly-dancing every night at 8 p.m.

Having loosened his shoes for comfort during his meal, the official became so energized by the belly dancer's performance that for reasons he can't explain he suddenly tossed one of his shoes onto the stage.

"He thought he was being funny," says a friend and fellow diner, a well-respected Washington lawyer who requests anonymity. "He had no idea it was an insult."

But the instant the shoe landed at the belly dancer's feet, he continues, "the music stops, the dancer storms off, and our entire dinner party is immediately thrown out the door."

David Plouffe, who was Barack Obama's presidential-campaign manager, writes to supporters this week that presidential inaugural events of the past too often "focused on wealthy donors and Washington lobbyists."

"This year, every American will have a chance to be part of the inauguration," he promises. "President-elect Obama and Vice President-elect Biden want you to join them in celebrating the unity we need to renew America's promise."

He then provides a Web link where everyday supporters who wish to celebrate Mr. Obama's victory can sign up to receive information on inaugural tickets and events. But first one has to provide a name and address, at which time a screen appears seeking donations to Mr. Obama's inaugural.

As someone who has covered seven presidential inaugurals, take this columnist's word: if you don't pony up the big bucks, you ain't getting into the party.

Expenditures partly went to the deployment of two electronic archives, including the EOP (Executive Office of the President) system launched just two weeks ago, enabling the transfer and storage of unprecedented volumes of presidential records.

Also during Mr. Weinstein's tenure, the once-private Richard M. Nixon library was incorporated into the National Archives' system of presidential libraries. (Speaking of which, Archives is in the process of moving Mr. Bush's materials to Texas, where they will displayed for future generations.)

Twentieth-Century Fox Films and the American Humane Association on Wednesday night held a Washington screening of "Marley & Me" (the former being a yellow Labrador retriever puppy with a big red Christmas bow around his neck), and there wasn't a dry eye in the house.

Based on the book written by Philadelphia Inquirer columnist John Grogan, the movie, which opens Dec. 25 and stars Jennifer Aniston and Owen Wilson, follows the scribe and his wife, Jenny, as their "sweet, affectionate puppy" grows into a "naughty, hyperactive dog" that gets kicked out of obedience school and swallows an 18-karat solid gold necklace, recalled Publishers Weekly.

Marley became so incorrigible that Mrs. Grogan ordered him expelled from the home. Fortunately, she relented, although thousands of so-called Christmas puppies in this country don't have such happy endings.