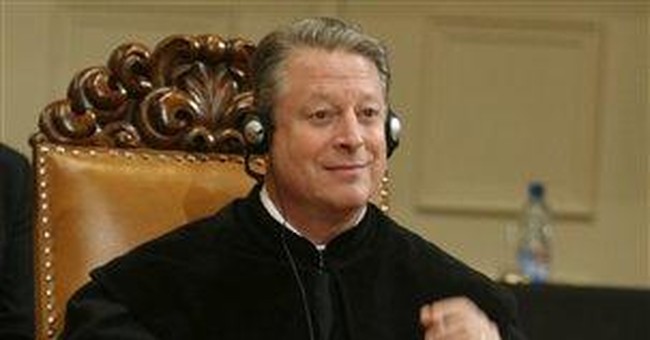 It's been a dozen years since Vice President Al Gore embarked on his infamous fundraising trip to a Buddhist temple, after which Attorney General Janet Reno, despite calls for a probe from within her Justice Department, declined to appoint an independent counsel to investigate.

Miss Reno concluded that Mr. Gore had not participated in White House conversations about using the contributions for the Clinton-Gore campaign, although a memo later surfaced from within the vice president's office suggesting otherwise.

At a loss for words when pressed by federal agents, Mr. Gore argued that he had been drinking a lot of iced tea that day and perhaps was in the bathroom when the dialogue turned to how to spend the money.

We recall this so many years later because Mr. Gore's unusual iced tea defense was brought up this week by Sen. Arlen Specter, ranking Republican on the Senate Judiciary Committee, when he spoke of the need to strengthen the Justice Department under its new Democratic leadership.

Mr. Specter not only was sharply critical of former Attorney General Alberto R. Gonzales for having "molded his views to accommodate his appointer," President Bush, he singled out Miss Reno for at least one lapse in judgment.

"There was the relatively notorious incident where the vice president was at a meeting and drank a lot of ice tea and absented himself from certain parts of the meeting where he ... had a rationale for not knowing certain things," the senator recalled.

"I questioned Attorney General Reno in detail about that during Judiciary Committee hearings and she said: 'Well, there just wasn't sufficient evidence.'"

As for the upcoming confirmation hearings for President-elect Barack Obama's attorney general-designate, Eric Holder, Mr. Specter stressed there "is no intent on my part or on the part of any of my colleagues on the Republican side of the aisle to engage in partisan sniping."

HATS OFF TO JACK

"Danny Glover was the hit of the night, especially because the audience wasn't expecting him," notes Washington malpractice lawyer Jack Olender.

The foundation's America's Role Model Award, among other honors, went to Dr. Alfredo Quinones-Hinojosa, who in his teens came illegally to the United States from Mexico as a farm worker. He's gone on to become one of the nation's leading brain cancer surgeons and president of the Brain Cancer Research for a Cure Foundation.

We've just caught up with former Washington Times "Inside the Beltway" columnist W.J. "John" Elvin III, who is editor and publisher of Fiona, his new annual publication in book format of strange and mysterious stories.

"'Fiona' takes its name from the elusive Scottish romantic poetess and writer Fiona Macleod," Mr. Elvin educates. "Though sought by admirers, suitors and literary investigators, she was never actually seen in person. Upon the death of writer William Sharp it was revealed that, as had been suspected in some quarters, he, in fact, was Fiona Macleod."

As for what readers will discover in the pages of "Fiona: Mysteries and Curiosities of Literary Fraud and Folly," Mr. Elvin recalls that "strange and intriguing stories, fascinating to book lovers, are found in the field of literary detection. These include mysterious cases of forgery, fraud, hoaxes, false memoirs, fake discoveries, travel to nonexistent locales and related crime and mischief."

Among other questions and controversies Mr. Elvin explores: Did someone in China write the Dead Sea Scrolls?; Parson Weems to the contrary, George Washington apparently swore a false oath; and biographers may insist, but John Paul Jones did not say "I have not yet begun to fight."

Retail price of this first edition is $19.95, "but I'd send a single copy to any of your readers for $10, postpaid, if they write me at P.O. Box 286, Upper Fairmount, Md. 21867. That's down near Pocomoke if you know the area, home to world famous oyster shuckers and chicken pluckers."