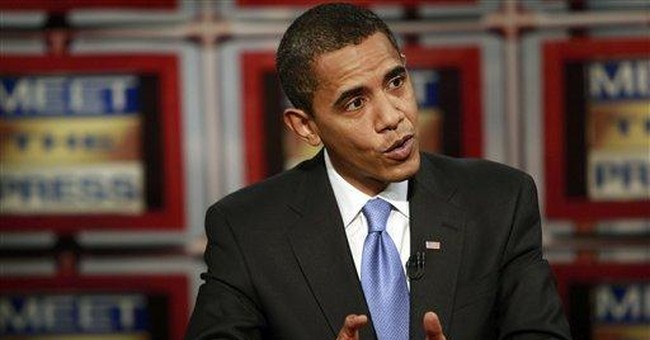 That was Michael Reagan doing a perfect impersonation of his father, Ronald Reagan, while appearing at the Heritage Foundation to discuss reviving the Reagan agenda in America.

Given the enthused audience of former Reagan hands, Mr. Reagan didn't stop there, telling tales and cracking jokes about growing up in the Reagan household. At one point, he recalled an old Hollywood rumor that his father was approached to play Rick Blaine in the classic movie "Casablanca," but turned down the role.

The younger Mr. Reagan recalled hearing somebody comment, "Had Ronald Reagan accepted the role of Rick in the movie, Ingrid Bergman may have decided to stay."

"Casablanca," if we might digress, is one of President-elect Barack Obama's two favorite movies, the other being "One Flew Over the Cuckoo's Nest."

A representative of Eureka College has let it be known that Mikhail Gorbachev will be visiting Ronald Reagan's alma mater in Illinois this spring to talk about the late president's influence in the world.

The 77-year-old Mr. Gorbachev, a recipient of the Nobel Peace Prize, was the last general secretary of the Communist Party of the Soviet Union and was the Soviet Union's last head of state until its 1991 dissolution.

Which isn't to say that Mr. Gorbachev doesn't continue to have revolution running through his veins. During a visit last autumn to New Orleans, he surprised everybody, including President Bush, by promising to lead a local revolution if the city's faulty levees weren't rebuilt by 2011.

"We will be coming back," he told a cheering crowd. "If this pledge is not fulfilled, we will start a new revolution in New Orleans."

Be advised that the federal government will lose nearly one-third of its work force over the next five years as baby boomers retire.

So it's not surprising that on top of the list of advice for President-elect Barack Obama from the nonpartisan Partnership for Public Service is a "national call to government service" - making people issues a presidential priority.

Not all Republicans in Washington are busy packing boxes. After all, if President-elect Barack Obama really is able to rebuild America, he's going to need a good cement man.

As Republican John Shaw explains it, he's been reaching out to Democrats his entire career (in other words, before it recently became fashionable).

As senior vice president of government relations for the Portland Cement Association (PCA), he not only provided input on the recent congressional economic-stimulus package, he also huddled with the Senate Environment and Public Works Committee, chaired by Sen. Barbara Boxer, California Democrat, about the 2008 climate-change bill, saving his industry over $1 billion annually in production costs.

"There is no us-and-them in this new administration," explains Mr. Shaw, who was an assistant secretary at the Energy Department (confirmed at age 33) before he began lobbying for the PCA. "The smart people in this town are working together, focusing on solving the serious problems that face our country."

Otherwise, the one-time aide to Dick Cheney during the 2000 presidential election and counsel to then-Sen. Fred Thompson of Tennessee has something else in common with Mr. Obama. Both are collectors of rare comic books.