Ted and John Driving Off the Cliff in a GOP Convertible

John Kass
|
Posted: Apr 27, 2016 12:22 PM
Share   Tweet
The opinions expressed by columnists are their own and do not necessarily represent the views of Townhall.com. 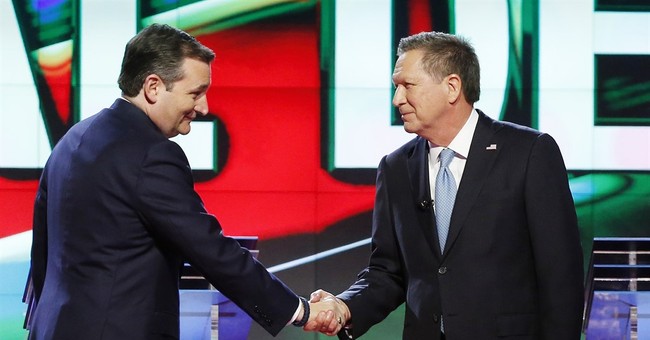 Coward that I am, I've always been afraid to watch that old movie "Thelma and Louise."

What stopped me was that car, the one they drove off the cliff together while holding hands, that gorgeous turquoise 1966 Thunderbird convertible hurtling into oblivion.

Such a sweet ride didn't deserve ending up at the bottom of the canyon to burn and rust in a lonely desert.

I can easily avoid "Thelma and Louise," but who can ignore Ted and John?

Cruz and Kasich are holding hands now, too, and driving off their own cliff in their awkward noncompetitive alliance to stop Donald Trump from winning the Republican presidential nomination.

Cruz claims Indiana values, but let's hope he doesn't shoot underhand free throws as he campaigns from Hoosier gym to Hoosier gym. Kasich withdraws from the cornfields and, as befits his squishier, whiny establishment ways, opts for Oregon.

And Trump, bellowing that his enemies are colluding against him, says it's all so "sad."

It's not collusion. It's not being done in secret. But it is clear that this Cruz-Kasich alliance isn't about defeating Trump at the polls, but stopping him at the convention, where party insiders will make their moves from the flanks, off camera.

By becoming Kasich's twin, Cruz hardly comes across as a brash Republican reformer. All the Cruz-Kasich alliance really does is make Trump appear stronger.

And the wreckage at the bottom of this canyon is the Republican Party.

The rusted hulk of old Detroit steel is a machine that once thrummed and gleamed. Gorgeous models once slowly ran the backs of their long fingernails along the fenders of such cars in old TV commercials produced by Mad Men.

But the Mad Men are dead. Were they alive today, they'd probably be shamed for demanding exclusive use of the men's room after those long three-martini lunches.

So what comes out of 2016? A new party, perhaps unrecognizable to the Republican establishment, and that's what terrifies them. Whether Trump wins the nomination and defeats Hillary Clinton in November or flames out and loses to her is a short-term question.

The Republicans are in full panic now, but later the Democrats will have their turn. As the national focus is distracted by the politics of gender identification and public washrooms, Democrats have become the establishment party.

Democratic front-runner Hillary Clinton is the embodiment of the establishment, with her Wall Street speeches and connections, her war party friends, the Clinton Foundation muscle.

Now, even Republican moneyman Charles Koch says he might be able to support the new Establishment Queen.

That is what's so fascinating about this campaign. Republicans driving off the post-establishment cliff, Democratic establishment waiting to put that pedal to the floor.

We're not seeing a continuation of history, we're seeing the breaking, and the beginning of reformation.

So who drove that Republican ride off the cliff and into this ditch?

And neither did Trump's millions of new voters, driven by legitimate economic anger that is constantly mocked -- and dangerously so -- by liberal elites who shame them.

You know the workers I'm talking about: They once formed the backbone of the Democratic Party. They fought the wars, they lost their jobs when their factories closed. A few years ago, they were dismissed as those bitter clingers, holding fast to their guns and their religion in times of change.

Who said that again? President Barack Obama said it years ago in San Francisco, fundraising among the liberal rich, and the dismissive attitude of the elites has only grown stronger since then.

Blue-collar America was once Democratic, and as long as the people obeyed the bosses, they were tolerated. They were props for politics, and then President Bill Clinton appealed to them to win the White House, before abandoning them to trade deals with Mexico.

Now that their economic frustration drives them to Trump, they are ridiculed. But Trump didn't drive this thing off the cliff.

And Ted Cruz didn't put it into a ditch. He's a constitutional conservative, and the Republican establishment would never give conservatives the keys to the nice car.

Conservatives use the Constitution as a road map. And the establishment can't abide that.

That's partly why Trump got so much TV air time at the beginning of this campaign. The economic nationalist isn't conservative, but he was entertaining, and he fed on the mother's milk of Fox News, getting fat with it, crowding out his littermates like Rand Paul, who dared to talk about cutting the military defense budget and not fighting wars in the Middle East.

And Kasich? He's the guy going too slow in the middle lane, speeding up just when you want to get around him. He wants people to like him, but that whiny sound coming out of his mouth is becoming unbearable.

But they're together now, aren't they?

The twins, Cruz and Kasich.

Just see them in that beautiful 1966 Thunderbird, the top down, the sun up, the hard light making your eyes go squinty.

Cruz: Are you sure?