John Kass
|
Posted: Apr 21, 2016 12:16 PM
Share   Tweet
The opinions expressed by columnists are their own and do not necessarily represent the views of Townhall.com. 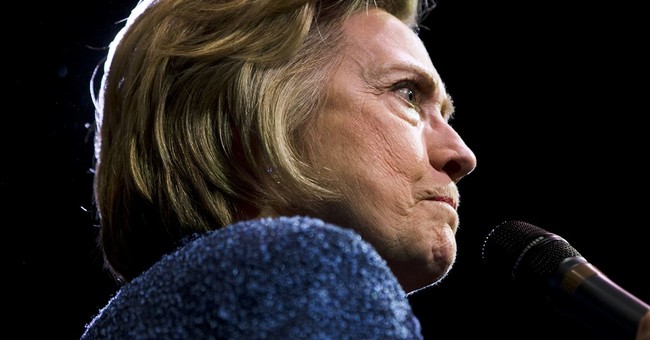 Hillary Clinton and Donald Trump are the two most disliked candidates ever to run for president of the United States.

I don't mean perhaps. I mean really. And if they win their party nominations, it will only get worse.

She's widely considered to be a liar, and a bad one. He's considered to be vulgar and crude. She's the American political establishment's Madame Iron PantsSuits pretending to be a progressive, with that Wall Street cash and packs of hot sauce in her purse if she's on black radio and needs to pander.

And he's the economic nationalist short on specifics but long on attitude, the guy in the baseball jacket at the end of the bar at 4 a.m., bellowing about his triumphs. You foolishly let him catch your eye, and he demands to tell you about all the chicks who dig him.

What can stop these people? Here's one thing that won't stop them:

Gaffes were stupid, cringe-worthy comments made by politicians, causing them great embarrassment and hyped by their opponents with glee to drive those negatives even higher.

Since much of the media leans left, gaffes made by Republicans got much play, but occasionally Democrats would be skewered, too, especially if they screamed like a banshee, as did presidential candidate Howard Dean.

And given that Clinton and Trump are held in such low esteem with record-setting negatives, I thought that gaffes would do them in.

But now I wonder if they're blessed with GID, Gaffe Immune Disorder.

Here's the thing. Will the gaffe -- once a staple of American politics -- recede from modern cultural memory like those gender-specific restrooms?

Once gaffes were serious business, as in the 1976 presidential debate between Republican President Gerald Ford and Georgia peanut farmer and future presidential rabbitphobe, Democrat Jimmy Carter.

During their debate, Ford said, rather forcefully, "There is no Soviet domination of Eastern Europe."

"I'm sorry, what? ... did I understand you to say, sir, that the Russians are not using Eastern Europe as their own sphere of influence in occupying most of the countries there and making sure with their troops that it's a communist zone?"

Ford was seized by some stubborn self-destructive impulse and refused to budge. He knew better. He was, after all, the president, but he doubled down. And he insisted that Poland, Romania and what was then Yugoslavia were free from the Soviet grasp.

Ford lost the election. And four years later, Carter lost to the Iranians, and that killer rabbit that scared the heck out of him when he was fishing, and Ronald Reagan.

It sure was one hell of a gaffe.

But how do you explain that to today's voters, who've spent the last eight years getting their political news on Comedy Central and watching Trump on "The Apprentice"?

The words "Soviet" and "Yugoslavia" might be as foreign to them as "Cold War" and "mutual assured destruction."

Today's gaffes -- if you can call them that -- are usually of a personal nature. And Trump and Clinton have issued some doozies. But they don't seem to be fazed by them.

Trump, for example, said Sen. John McCain, the Arizona Republican, was not a war hero because McCain, a Navy pilot during the Vietnam War, was shot down and captured by the North Vietnamese.

"He's not a war hero," said Trump of McCain, who was kept as a prisoner in the infamous "Hanoi Hilton." "He's a war hero because he was captured. I like people that weren't captured."

Trump seemed to get away with that one, and many others, and each escape emboldens him. Some are quite rude; others are slips of the tongue. Like the other day, in New York, when he confused the Sept. 11, 2001, terrorist attacks with the 7-Eleven convenience store chain.

"It's very close to my heart because I was down there and I watched our police and our firemen down on 7/11, down at the World Trade Center, right after it came down, and I saw the greatest people I've ever seen in action."

That was a stupid gaffe. But it didn't cost him votes in New York.

There are entire video libraries devoted to Clinton gaffes, some of them because they're not mistakes, per se, but a desperate yearning to believe her own fantasies. Like her insistence that her Libya policy did not cost a single American life.

Perhaps most famous is her great lie about how she heroically faced sniper fire in Bosnia and ran with her head down, a riveting story, except it didn't happen.

"I say a lot of things -- millions of words a day -- so if I misspoke, that was just a misstatement," she said during her 2008 presidential run when confronted about her lie.

The two candidates keep saying these ridiculous things and getting away with them.

Hillary and Donald may have policy differences. But as public figures, they're very much alike. They're absolutely shameless. And they want to be president.