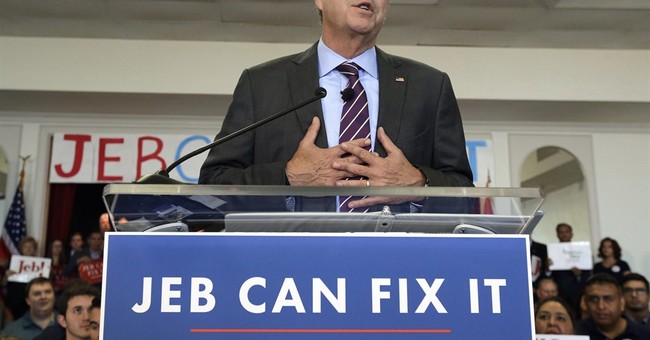 I feel a deep regret in missing even one game of the World Series to watch the Republican presidential candidates' debate.

It's painful, like being ambushed by Tolkien's dwarfs and pummeled in the nether regions, and now it really, really hurts.

Because the last thing I needed in all the world was to see a guy named Bush talk about tax cuts while referencing his own wet lips.

"Look, the -- the deal is already done," Jeb Bush, once the bright star of the establishment GOP, now fading badly, said in the Republican debate the other night. "The biggest tax increase happened under the watch of Barack Obama, and spending's gone up. You find a Democrat that's for cutting taxes -- cutting spending $10, I'll give them a warm kiss."

Agreed, governor, you won't find any Democrats who want tax cuts. Democrats love taxes and alleged "free stuff" to buy themselves votes that the middle class pays for, and they raised the debt ceiling in Congress so the spending and spending can continue.

But here's a news flash: The Republicans control Congress. They talk like fiscal conservatives, but the Bush wing -- the establishment boss Republican wing -- went along as they always do and raised the debt ceiling to spend even more. Democratic House Minority Leader Nancy Pelosi was smiling so hard I thought her face might crack off.

Both sides are the meat puppets of Wall Street. Rand Paul talked about it, but the "talent" -- meaning CNBC talking heads -- didn't want to hear him and ignored him.

And so the combine thrives, Democratic spenders and Republican spenders, two horns on the head of the same ravenous federal goat.

But please, Jeb, stop with the wet lips and the kissing!

The "warm kiss" bit was a moment of agony for Bush backers, and the liberal court jesters on "Saturday Night Live" should have fun with it, but even in pain there is insight.

Bush is done. He's tired, spent, overwhelmed by the conservative anti-establishment anger that has led to Donald Trump and Ben Carson leading the field.

The former governor of Florida had nothing really to say, except to brag about his fantasy football prowess. And so the establishment GOP crown has been handed to fellow Floridian, Sen. Marco Rubio, with his immigrant story and that extremely big right ear and his muscular foreign policy, which means, I presume, more American soldiers with more boots on someone else's ground.

Rubio showed at least he has the rhetorical talent to stand with Hillary Clinton. He anticipated taking a few weak, scripted shots from Bush about missing Senate votes while campaigning, and Rubio slapped his old mentor down for all to see.

It's now being called the Rubio moment, likened to Luke Skywalker defeating his father, Darth Vader.

Deftly done. All that was missing from this duelist was to hear "La!" as the blade went in. It was over.

Rubio also fed red meat to the Republican crowd by attacking the media as liberals sympathetic to the Democrats. For the most part, of course, it's true, and 30 years in the business tells me so.

"The Democrats have the ultimate super PAC: It's called the mainstream media," Rubio said, "Last week Hillary Clinton went before a committee. She admitted ... 'Hey, this attack on Benghazi was caused by al-Qaida-like elements' ... and yet the mainstream media is going around saying it was the greatest week of Hillary Clinton's campaign. It was the week she got exposed as a liar."

Sen. Ted Cruz unleashed his fangs and followed up with his own attacks on the hapless CNBC monitors, who were clearly out of their depth, being accustomed to smooching the behinds of CEOs rather than moderating presidential debates.

And Bush? Crumbs falling to the bottom of the establishment toaster.

Paul said he would filibuster the insidious budget deal on the floor of the Senate beginning Thursday, and the moderators -- and the rest of those on the stage -- yawned.

"We raised the military spending, took from entitlements and raised domestic spending, and the deficit will explode under this," said the senator from Kentucky, whose campaign against the GOP establishment was Trumped months ago. "This is the unholy alliance that people need to know about between right and left. Right and left are spending us into oblivion."

But who heard Paul's heresy when there was entertainment to be had and media to bash and sound bites to celebrate? Not the moderators, not the other candidates and perhaps not even the American people.