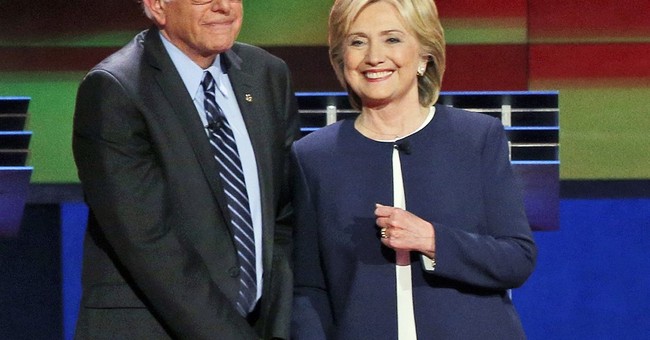 1) Hillary Clinton, your husband has had numerous affairs, has had sex with an intern and he settled a sexual harassment case with Paula Jones. Incidentally, there are far worse accusations than that against him that haven’t been proven. So, isn’t it fair to say that your husband is part of the war on women?

2) Hillary Clinton, in the first debate, you said you were proud to have drug companies and health insurance companies as your enemies. However, your campaign and the Clinton Foundation have received millions of dollars from both industries. Will you be giving that money back?

3) Hillary Clinton, in Bob Woodward’s book, The Choice, he noted that you communed with former First Lady Eleanor Roosevelt and Indian leader Mahatma Gandhi from beyond the grave. Your husband also confirmed in a 2012 speech that you used to commune with Eleanor Roosevelt; so this isn’t something that you can credibly deny. Can you explain why you did that and what you believe you learned from talking with the dead?

4) Hillary Clinton, do you think someone who hasn’t even driven a car since 1996 is in touch enough with the average person to run the country?

5) Hillary Clinton, in the first debate, you were proud to have Republicans as enemies. Since that is your attitude, wouldn’t electing you as President guarantee non-stop partisan warfare?

6) Hillary Clinton, the constant refrain from Republicans has been that you’re not qualified to be President. Can you name your 3 biggest accomplishments that you believe qualify you to be President of the United States?

7) Hillary Clinton, the Clinton Foundation took in millions in donations from foreign governments and defense contractors, some of which you helped rather significantly when you were the Secretary of State. Your husband also collected some rather extravagant amounts in speaking fees. According to the International Business Times,

This is unethical on its face and it raises serious questions about whether you took bribes from defense contractors and foreign governments as Secretary State. If you had it to do over, would you have done things differently?

8) Hillary Clinton, back in 2002, after reading the same intelligence reports that George Bush did, you took a position to his right on whether Saddam Hussein had WMDs. You said, “It is clear, however, that if left unchecked, Saddam Hussein will continue to increase his capacity to wage biological and chemical warfare, and will keep trying to develop nuclear weapons." Given that you made the same mistakes that George Bush did when it came to knowing whether Saddam had weapons of mass destruction, do you think it’s unfair for people to accuse him of “lying” about the evidence?

10) Hillary Clinton, you’re going to be 69 years old next year and you suffered a very serious head injury in 2013 after you fainted. That caused a blood clot in your brain along with a concussion your own husband said it took “six months of very serious work” to get over. Are you healthy enough to handle a job as incredibly demanding as being President of the United States? Additionally, can you assure the American public that there was no brain damage from your injury that might make it difficult for you handle the position?

12) Bernie Sanders, you have attacked Uber on multiple occasions. You’ve called it “unregulated,” you say it has “serious problems” and yet your campaign has exclusively used Uber instead of taxis because it’s cheaper. Does that make you a huge hypocrite?

14) Do you think men who claim to identify as women should be allowed to use the same bathroom as women? If your answer is “yes,” do you think this is unfair or even potentially dangerous to women?

15) All the candidates on the stage are strong supporters of the Affordable Care Act which was the centerpiece of Barack Obama’s agenda as President. However, the ACA was sold to the American people with a lot of untruths. Barack Obama said that if people like their plan and their doctor, they could keep them. He claimed that the ACA wouldn’t raise the deficit. He said the average family would save $2500 in premiums per year. None of these promises turned out to be true and yet, none of you have criticized the President for misleading the American people. Since that’s the case, why should anyone believe your promises?

16) There are hundreds of thousands of American citizens who have been victimized by illegal aliens who wouldn’t be here in the first place if our border were secured and our immigration laws were enforced, something nobody on this stage plans to do if elected as President. What do you say to the victims and families of the victims who’ve been raped, assaulted, or robbed by illegal aliens? What do you say to an American mother whose child has been molested, murdered or killed by a drunk-driving illegal alien?

17) How much of a problem is white privilege for America and if you do think it’s a problem, what can we do to combat it? Also, what would you say to white people who disagree with the idea that they have white privilege?

19) Please raise your hands: Would anybody on the stage be willing to make the White House a gun-free zone to reduce the chance of gun violence there? If not, then does that policy really make sense for our schools?

20) Since 2008, the Democrat Party has lost 69 House seats, 13 Senate seats, 910 state legislative seats and 12 governorships. Has your party gotten so far out of the mainstream that it will make it difficult for a Democrat to be elected President in 2016?