The D.C. Idiocracy: Remember The Really Dumb Kids In School? They're Now In Charge Of Your Life 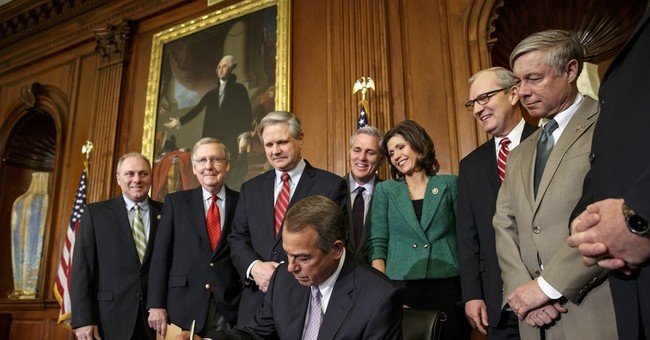 How did our politicians get so stupid?

When I say our politicians are stupid, I’m not talking about ideological differences, I’m talking about stupid in a turkey-is-drowning-while-it-looks-up-in-a-rainstorm kind of dumb. Of course, that’s a myth. Turkeys don’t actually drown themselves to death that way – but, can we say the same for Joe Biden, Barack Obama and John McCain? I think we all owe a debt of gratitude to the staffers who carry their umbrellas and remind them to look down during rainstorms.

Now at first glance, saying that our politicians are stupid doesn’t seem to hold any water. After all, these are successful people and many of them come from the best universities.

Yet, look at what they actually do.

Barack Obama cut a deal with Iran to supposedly stop it from getting nukes. Setting aside the fact that it doesn’t do that, Iran is holding four American hostages. Obama didn’t even bother to demand that they be freed before he began releasing billions of dollars to Iran. He also allowed Iran to inspect its own nuclear sites. Think about that. We think Iran is working on nuclear weapons; so to prove that it’s not, we’re going to let Iran inspect its own sites and say, “Nope, there’s certainly nothing nefarious going on here. Take our word for it, Great Satan!” To top it all off, Obama admits the money we’re releasing to Iran will be used to fund terrorism. I know that Obama thinks that whole “war on terrorism“ thing is passé, but should we really be funding terrorists who hate us now? Is there ever a good time for that?

Oh, and did you hear about the massive hack of the United States Government that apparently allowed China to get its hands on the private data of over 22 million Americans? If you’re wondering how something like that could happen, rest assured that a towering level of stupid was involved.

Some of the contractors that have helped OPM with managing internal data have had security issues of their own—including potentially giving foreign governments direct access to data long before the recent reported breaches. A consultant who did some work with a company contracted by OPM to manage personnel records for a number of agencies told Ars that he found the Unix systems administrator for the project "was in Argentina and his co-worker was physically located in the [People's Republic of China]. Both had direct access to every row of data in every database: they were root.”

Speaking of technical projects, the Obamacare website may have been the single worst website rollout in the history of the Internet. There were months of delays, glitches and general incompetence that drove millions of people up the wall. The cost of that disaster? It was 2.1 billion dollars, which is more than four times the 500 million dollar cost of Facebook. Just to up the ante on the level of stupid involved here, the Obamacare website failed every test right before it went live. The website couldn't even handle 200-300 people at a time without crashing and it was STILL released to the public because, you know, what could go wrong?

Even that is smarter than the way we handle illegal aliens in this country. Did you know that when the government catches illegal aliens, it frequently just releases them and asks them to show up for a deportation hearing? Unsurprisingly, as many as 90% of illegals that are caught don’t show up so they can be deported. But don’t worry, the Department of Homeland Security is on the case!

Officials with the Department of Homeland Security reiterated all those caught crossing the border after Jan. 1 are a top priority to have their cases decided in immigration court and to track down those who’ve disappeared.

If it’s top priority to find the illegal immigrants who didn’t show up to be deported, maybe they shouldn’t have released them in the first place? Hey, aren’t these the same people that are protecting the country from another 9/11? Sleep well tonight!

Incidentally, it’s tempting to pin all of this on the Democrats, but the Republican Party leadership in Congress is just as stupid. Keep in mind that Mitch McConnell’s favorite negotiating tactic is to declare that Republicans won’t shut down the government right before he starts telling Obama what he wants. Even Obama, who’s about as sharp as a bowl of spaghetti, knows all he has to do is wait until he gets close to the deadline for a shutdown to get everything he wants.

McConnell’s counterpart in the House, John Boehner, is just as habitually incompetent. His idea to stop Obama’s illegal immigration policy was to refuse to fund the Department of Homeland Security until Obama gave in. Then, when Obama refused to give in, Boehner immediately caved because the Department of Homeland Security is important and he couldn’t risk defunding it. Before you laugh at Democrats for voting people like William Jefferson and Marion Barry into office, remember that the two most powerful Republicans in America today are John Boehner and Mitch McConnell. Choosing these two idiots as leaders is every bit as embarrassing as selecting a mayor who smokes crack or a congressman with bribe money in his freezer.

The average manager working the afternoon shift at Wendy’s could do a better job of negotiating than McConnell, Boehner or Obama. We could go grab some half-drunk girl out of a club and even she could tell you that if you let people who commit crimes go, they’re not going to show up for the court dates. There are literally tens of millions of Americans who could have come up with something that outperformed healthcare.gov if you gave them 2 billion dollars to work with (“Hey, Google, I’ll give you 500 million dollars to build this website and then I’ll keep the other 1.5 billion for myself….bwahahahaha….what? Oh, that laugh? Sorry, you must be hearing the TV show I’m watching in the background.”)

This is the tragedy we live with in America. We have such a great country, we have so many great people, but our whole nation is being dragged under by legions of arrogant Cletuses in D.C. who’re convinced they’re geniuses because they’re surrounded by aides who tell them how wonderful they are all the live-long day. Our country is headed full steam toward an iceberg and the people steering the ship are imbeciles. God help us all.