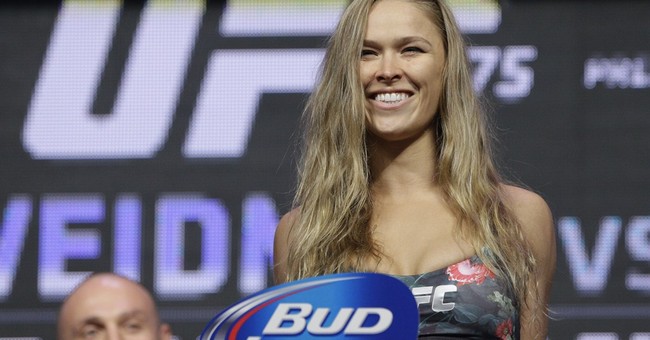 “People love the idea of winning an Olympic medal or a world title. But what few people realize is that pretty much every second leading up to the actual win is uncomfortable, painful, and impossibly daunting—physically and mentally. Most people focus on the wrong thing: They focus on the result, not the process. The process is the sacrifice; it is all the hard parts—the sweat, the pain, the tears, the losses. You make the sacrifices anyway. You learn to enjoy them, or at least embrace them. In the end, it is the sacrifices that must fulfill you.” – Ronda Rousey

Ronda Rousey is the most compelling female athlete in a generation. She’s attractive, witty and an unstoppable monster in Octagon. Shockingly, she may also be the biggest name in mixed martial arts today. Who would have ever guessed that a woman fighter could become that popular? Certainly not UFC president Dana White who once laughed and said “NEVER!” when he was asked when women would join the UFC. Ronda Rousey was such a Phenom that he changed his mind.

Sadly, Rousey’s father died when she was 8 years old; so she was raised solo by her mother who was a former judo champ. Her mother loved Ronda to death, but she didn’t seem like the type who worried that her child would be traumatized by a fall on the playground or a teacher grading in red ink.

"My first injury ever was a broken toe, and my mother made me run laps around the mat for the rest of the night. She said she wanted me to know that even if I was hurt, I was still fine."

Her mom also wasn’t the, “Aww, you tried and that’s all that matters” type either.

Two weeks later, I lost my second judo tournament. I finished second, losing to a girl named Anastasia. Afterward, her coach congratulated me. “You did a great job. Don’t feel bad, Anastasia is a junior national champion.” I felt consoled for about a second, until I noticed the look of disgust on Mom’s face. I nodded at the coach and walked away. Once we were out of earshot she lit into me: “I hope you know better than to believe what he said. You could have won that match. You had every chance to beat that girl. The fact that she is a junior national champion doesn’t mean anything. That’s why they have tournaments, so you can see who is better. They don’t award medals based on what you won before.

It’s true that EVERYBODY can’t be a world champion. But, can 99.9% of Americans get educated, pay their own way, get a job and support themselves and their families if they work at it? Yes, they can. Human beings really do live up or down to the expectations of people around them. Ronda Rousey’s mother EXPECTED her to be a champion – and she is. Do we expect people to support themselves or to be on welfare? Do we think most Americans are strong and capable of taking care of themselves or are they delicate weaklings who can’t make it through the day without the help of the government?

The response to that is usually some variation of “Life is hard.” Well, life was hard for Ronda Rousey, too. When she started her mixed martial arts career, she did workouts that would put a normal human being in the hospital.

Once he hit me so hard in the body that it knocked the wind out of me. I moved to take a knee, to catch my breath; he grabbed me with one hand and pulled me up. “You’re not taking a knee,” he said. “If you take a knee, I’m going to hit you more. You don’t have the choice to get hit or not get hit. You have one choice. You can get up and get hit or I can hit you down there.” That was the last knee I ever took. He kept throwing punches.

While this was going on, Rousey had to work three jobs to pay her bills.

My MMA career was getting off the ground, but I needed another job to carry me through until fighting started paying the bills. I hustled to find work. My sister Maria called a friend from high school and got me a job working the graveyard shift at 24 Hour Fitness. The job sucked, but every time the resentment welled up, I imagined the backseat of my Honda as my bedroom. A few weeks later, I got a second job: judo at a club on L.A.’s Westside. I picked up a third job working as a vet assistant at an animal rehabilitation clinic. It was piecemeal employment, but it was enough to pay (most of) my bills.

Today, Ronda Rousey may be the biggest name in mixed martial arts; she has a new book out; she’s doing movies; she’s in the Sports Illustrated swimsuit issue and she’s making millions in endorsements.

She didn’t get there because of a government program, “safe spaces,” or because she was treated like she was made of glass. She had a long, hard road to get where she is today and she can take pride in how far she’s come and what she’s accomplished.

There are a lot of lessons there for people who are willing to hear it – particularly liberals. Why liberals? Because their whole philosophy revolves around encouraging victimhood, dependence and weakness. College kids don’t need “safe spaces;” they need to test themselves. Poor Americans need to learn to depend on themselves, not the government. Our society doesn’t need to become “more sensitive;” it needs to get tougher. Everybody doesn’t have to fight for a living, but we all have to struggle. Teaching more Americans to embrace that battle instead of shielding them from it will make us into a better nation.