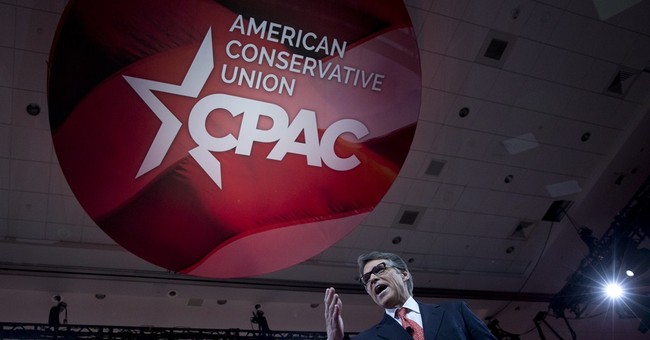 14) "Washington, or as I like to call it, 68 square miles surrounded by reality." -- Scott Walker

13) “There’s not a single Democrat here. It’s almost like CPAC invited Benjamin Netanyahu to speak. Well, we could have had Hillary here, but we couldn’t find a foreign nation to foot the bill.” – Ted Cruz

11) "Imagine if we didn't have a President traveling the world bad mouthing America....that's the UN's job." -- Marco Rubio

9) "The idea that we should hold a coronation (for Jeb Bush) because 50 rich families decided who best represents their interests...no way, Jose!" – Laura Ingraham

8) “I'm proud to be an American because America gave me the choice to choose Jesus.” -- Naghmeh Abedini

7) "No parents are sitting around a kitchen table tonight saying, 'If our child can get a higher minimum wage, my gosh, every one of our aspirations for them will be realized." – Chris Christie

5) “Folks, Brian Williams isn’t the exception. He’s exactly what they’ve taught us to expect from them all. It’s not journalism any more — it’s entertainment, it’s celebrity, it’s agendas and it’s money. All too often, a lie is now an acceptable way of communicating. To the media, a lie has as much value as the truth.” -- Wayne LaPierre

3) “Oh, the naive Obama State Department. They say we can't kill our way out of war. Really? Tell that to the Nazis. Oh wait, you can't. They're dead. We killed 'em.” – Sarah Palin

1) “We are not a nation of immigrants. We are a nation of citizens. I am sick and tired of the American citizen being demeaned and treated as a second-class citizen while anybody who crosses the border is treated as the most virtuous human being on the face of the earth.” – Mark Levin