5 Reasons Republicans Lose Elections Wrapped Up In The Amnesty Bill 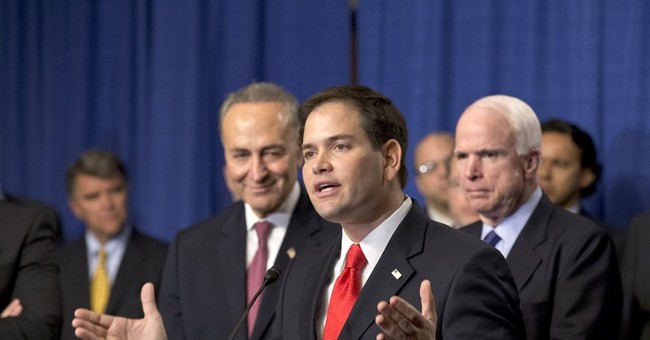 If you want to know what's wrong with the Republican Party wrapped up in one pretty package, like the head in the box at the end of Seven, all you have to do is look at the latest amnesty disaster that was created by a gang of Republican idiots in the Senate. Marco Rubio, John McCain, Jeff Flake, Lindsey Graham, Bob Corker, John Hoeven, Kelly Ayotte, Dean Heller and the rest of the braindead Senate Republican buffoons that have supported this bill are the living personification of the words, "Stuck on Stupid." They picked the wrong issue, at the wrong time, did it the wrong way, and set it up so that no matter what happens, the Republican Party is doomed to get kicked in the teeth.

Why does the Republican Party lose elections? Because we do things like this...

1) Most of the Republicans backing the bill in the Senate lied to their base: What is George W. Bush's daddy most remembered for? Being Ronald Reagan's VP? No. Winning the Gulf War? No. Oh, yes, it was breaking his, "Read my lips, no new taxes" pledge. But, is that fair? After all, politicians lie, don't they? So, what makes that one stand out? Well, there's a reason people remember that lie: because Bush gratuitously lied to his base on an issue that deeply mattered to them. It wasn't just a lie; it was a betrayal. Well, guess what? Many of the Republicans in the Senate that have supported the McCain/Rubio amnesty bill are engaging in exactly the same type of betrayal.

"I am not, and I will never support any effort to grant blanket legalization/amnesty to folks who have entered, stayed in this country illegally." -- Marco Rubio

“In the Senate, Kelly’s top immigration priority will be to secure our borders – no excuses. Simultaneously, she will work to ensure that existing immigration laws are enforced and is against amnesty.” -- Kelly Ayotte's website

These types of lies to the base are the equivalent of adultery in a marriage. If they're going to blatantly lie on something this important, how do the American people trust these Republicans ON ANYTHING? The honest answer is that you can't trust them. Today they're lying on illegal immigration and tomorrow they may lie to you on deficit reduction, gun control, or abortion. When a politician's own supporters can't take anything he says at face value, how can the American people be expected to trust him?

The Rubio/McCain amnesty bill is essentially a Democrat immigration wish list with some phony security proposals tossed in that everyone paying attention to the bill knows are doomed to fail.

The Democrats will get 30 million new immigrants, probably 5-12 million of which they will turn into new voters, an end to tough interior enforcement, a continuing permanent stream of illegal aliens, a new guest worker program that will put more Americans out of jobs onto welfare while conservatives get absolutely nothing in return other than an empty promise of security from the exact same Republicans who have lied to them about being against amnesty.

When the Republicans won't even make a halfhearted attempt to fight for the issues that their supporters want, that they campaigned on, and that the American people are demanding, why should anyone vote them into office?

3) Politically, this bill helps Democrats in every way possible while hurting Republicans in every way possible: So, we have Barack Obama being buried under an avalanche of scandals. The IRS scandal, Benghazi, the NSA scandal -- the only thing the GOP had to do was stay out of the way, let him twist in the wind, and then reap the rewards in November of 2014. Instead, we have Republican senators taking the heat off Obama and breaking their word to their constituents to support a bill that primarily helps the Democrats.

Let's say theoretically, John Boehner loses his mind, abandons the Hastert rule, and passes the Senate bill with mostly Democrat support. Then, what would happen? Obama would take all the credit for the bill, millions of betrayed conservatives would stay home in 2014 in protest and Democrats would run ads non-stop attacking the GOP as racists for making the poor, put-upon "future Americans" wait 10 years to become citizens. In other words, this bill doesn't take the issue "off the table" at all and would likely cost the GOP many more Hispanic and conservative votes than it would bring in over the long haul.

Alternately, if the bill dies like a dog on the freeway in the House, Democrats will STILL run ads aimed at Hispanics attacking "racist" Republicans for blocking amnesty while millions of conservatives will still be furious at Senate Republicans for lying to them yet again.

Sell-outs like Marco Rubio and proven failures like John McCain may rake in campaign contributions from corrupt businessmen while the New York Times writes nice articles about them, but their stupidity and selfishness has put the Republican Party in a no-win situation from day one on this issue.

4) It misses an obvious opportunity: Whether you're talking Republican, Democrat or independent, white, black or Hispanic, male or female, straight or gay, it doesn't matter, just about every group you can find says that it wants the border secured and an end to illegal immigration. However, one of the groups that DOESN'T WANT that to happen is the Democrat Party.

So, why not toe the line on a popular issue like border security and MAKE THE DEMOCRATS VOTE AGAINST IT? Why not offer up some kind of legal status AFTER the border is secure, the fence is built and E-verify is in place without putting citizenship on the table? Giving any kind of legal status to illegals is better than they deserve since they're here illegally, but most Americans and even most conservatives would probably be okay with it if we actually got security first. Then, the GOP could do Hispanic outreach, hammer the Obama administration for refusing to enforce the law and accuse the Democrats of wanting to "deport grandma" for refusing to go along with the security first, legalization later idea.

The problem with that is too many Republicans DON'T WANT TO WIN ON THE ISSUE. Too much money is being slipped into their pockets, too many of their establishment buddies at cocktail parties want open borders, and too many corrupt businessmen want cheap workers with the American people picking up the tab. But, they realize that admitting all of this is political death; so they lie on the campaign trail, create political disasters like this amnesty bill and then try to cast the blame elsewhere for their inability to tell the truth.

5) The bill is proof that the GOP governs just as poorly as the Democrats: If you want proof that the Democrats can't govern, your first piece of evidence is Obamacare. It's a massive bill that legislators didn't even read, that was sold entirely with lies, that is failing in almost every way possible. Not only did it just eviscerate the Democrats in 2010, Obamacare is on track to kill them in the 2014 election as well as it's rolled out. It's like a shattered knee-cap, the gift that just keeps on hurting.

Yet, what is this immigration bill? It's a massive bill that no one has read, that has been sold entirely with lies that will fail in every way and keep on reminding people how bad it is. It doesn't matter if Rubio and McCain promise to buy the Great Wall of China and staff it with a million, zillion, jillion border agents because once illegals are allowed to stay here legally, none of the security promises will ever be fulfilled. Every last Republican senator voting for that bill knows that as does every informed person who follows this issue.

That begs a question: Why should the American people want the GOP in office? If both parties are just as incompetent, just as dishonest and just as committed to working for special interests instead of the American people, but the Democrats will give you more free stuff, then what good are the Republicans?