The Five Keys to Killing Obamacare 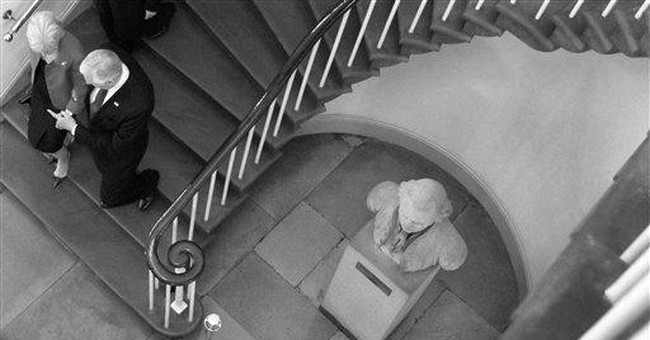 Now this is not the end. It is not even the beginning of the end. But it is, perhaps, the end of the beginning. -- Winston Churchill

Without question, people who zealously guard their freedoms, love their country, and want a better future for their children lost a big battle on Sunday. Yes, Republicans in the House fought skillfully and won the battle with the public, but the legislative chicanery, bribery, and utter disdain for the will of the people won the day for the Left.

Democrats in extremely red districts proved ready and willing to sacrifice their jobs in November to pass the bill. The Stupak block, which held firm for weeks, joined hands with the pro-abortion crowd to federally fund abortions for the first time in our history. The Democrats in Congress didn't care about the rules, they didn't care about the consent of the governed, and they didn't care about what is good for the country. This is a socialist power grab, pure and simple, and a little bit of what has made this a great country died writhing on the floor of the House last night.

The Democrats are calling this a historic moment. So it is. Of course, the same could be said of the crash of the Hindenburg, the sinking of the Titanic, and the start of the Civil War. This is an unconstitutional bill that will increase taxes, increase premiums, hurt Medicare, explode the deficit, federally fund abortions, lead to rationing, reduce quality of care, and dramatically increase the government's control over your life.

Moreover, unlike Social Security and Medicare, which were both popular bills that were passed with large bipartisan majorities, this bill is unpopular, passed without Republican support, and most of the "benefits" don't come into effect until 2014. That gives us an opportunity to do something that rarely happens in American politics: We have a legitimate chance to repeal an entitlement program.

Some people in the heat of the moment are talking about repealing Obamacare like it's a given that's bound to happen. It's not. It's going to be hard work, the results will be uncertain, and it will take years of political combat against utterly amoral opponents who have no qualms about lying, handing out bribes, or shredding the Constitution to get their way.

Here's a basic outline of what it will take to get it done:

1) Fight the Democrats on Reconciliation. Republicans are saying that they're going to do anything and everything in their power to block the further damage Democrats want to do to our country via reconciliation. That's the right attitude to have. However, at the end of the day, if Joe Biden is willing to disgrace his office to prevent the Republicans from offering legitimate amendments, eventually the Democrats will get something through. But, the more Republicans can block, the more discontent there will be on the Democratic side with the bill and less noxious provisions there will be to repeal.

2) Challenge the bill in court. It's clearly unconstitutional to force people to buy insurance. If the government can force you to buy insurance as a condition of citizenship, why couldn't the Congress just as easily write a bill forcing you to buy a car from GM? Numerous states will end up challenging the bill in court on that point. Given that we have four Supreme Court justices who believe in following the law, four who generally vote liberal regardless of the Constitution, and Anthony Kennedy who votes based on what side of the bed he gets up on this morning, it's impossible to say whether these legal challenges will work, but they're worth trying. If they succeed, suddenly, the whole health care bill, as written, will become unfeasible. That would give us the opportunity to roll it back.

3) Win the public relations war. So far, we've won the public relations battle over this bill, but that doesn't mean we're guaranteed to win it forever. It's entirely possible that Obama and health care reform will get a temporary bump from passing health care reform. That's not the least bit unusual after a big bill like this passes. Happily, that bump will be destined to fade, but expect Democrats to play the PR for all it's worth. There will also be a limited number of benefits that will kick in immediately. Expect the Democrats and their allies in the mainstream media to tout them endlessly while shamelessly lying and deflecting blame about the negatives. If we're going to repeal this bill, the truth has to win out over the lies because if the public is tricked into supporting this bill, it's simply not going to be repealed.

4) The Republican Party has to win big in the next two elections. Here's the sad reality: Republicans need to win 10 seats to take back the Senate, 40 seats to take back the House, and we need to defeat Barack Obama in 2012. Some people are taking it for granted that all those things will happen. Some people even think we'll take the House in a walk in November. Maybe that'll be the case. But, the Democrats have a big cash advantage, the American people have short memories, and eventually, the economy almost has to improve. So, there are no guarantees. If we do take back the House in 2010, it will be because legions of Americans who care about their country were inspired by a despicable bill to put up yard signs, contribute money, make phone calls, and do the rest of the grunt work it takes to get people elected. Are you going to be one of those people?

5) Repeal, replace, and refuse to fund. To completely repeal this bill, we're probably going to need to control the House, have 60 votes in the Senate, and hold the presidency. Obviously, that's a heavy lift -- particularly getting to 60 in the Senate. However, in the interim, if we can control Congress, we can start tearing this bill apart, piece-by-piece. We can try to get unpopular parts of the bill, like the tax hikes and the individual mandate, repealed. Congress also controls the purse strings; so we can shut down large parts of the plan by simply refusing to fund it. Moreover, we can suggest popular conservative ideas to replace unpopular parts of the bill and force the Democrats to either continue to go against the will of the people or vote them in. Then, if and when we get the votes and the presidency, we can try to repeal the whole thing. Don't let anyone tell you that this will be easy. But, don't let them tell you it's impossible either.

Last but not least, what John Boehner said on the House floor before the vote Sunday night should ring in the ears of every American,

Shame on each and every one of you who substitutes your will and your desires above those of your fellow countrymen. Around this chamber, looking upon us are the lawgivers from Moses to Gaius, to Blackstone, to Thomas Jefferson. By our action today, we disgrace their values. We break the ties of history. We break our trust with America.

Whatever it takes, we will not let it stand.