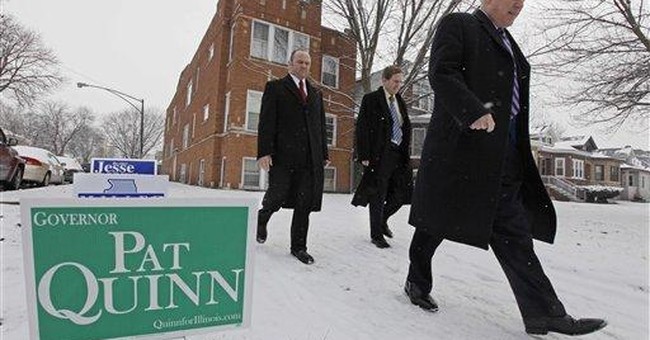 If future generations of Americans are going to have a bright future, we're going to have to get a handle on spending. Either we get these deficits under control and start paying off our debt or we're not going to remain a great nation. Moreover, given that Social Security went into the red last year and that program, combined with Medicare, represents a 100 trillion dollar unfunded liability that’s going to be coming due over the next few decades, this is an issue that’s not going away for the foreseeable future.

So, with that in mind, fiscal conservatives in DC need to start taking a different approach to spending. It's no longer about winning a battle here and there -- it's about winning a long war for this nation's financial well-being. Here are some principles they can follow during that fight.

2) Earmarks are corruption. Earmarks may be a small part of a deficit, but they're responsible for a large part of the corruption in Congress. That's because earmarks have turned into a way for members of Congress to pay off campaign contributors, political allies, and family members with our tax dollars. Until we get a handle on earmarks, we're not going to have honest government in this country.

3) The louder they scream "emergency," the more suspicious you should be. Most advocates of big government subscribe to Rahm Emanual's view of "emergencies:"

Never let a serious crisis go to waste. What I mean by that is it's an opportunity to do things you couldn't do before.

Two of the worst pieces of legislation passed in the last century, TARP and the Obama stimulus package, were passed this way and in both cases, the country would have been much better off had the bills failed.

5) The grassroots are your friend. If you're fighting for smaller government, you're not only taking on the Democratic Party, you're taking on liberal interest groups, the mainstream media, and even some members of the Republican Party. If you're going to pull it off, you're going to need help. That means you need to do everything you can to support and work with the conservative media, think tanks, and the Tea Party movement. They're the ones who'll get your message out, spread the word, and have your back. Reach out early and often -- it'll pay off.

6) Tie everything back to how it helps the people. One of the worst failings of fiscal conservatives is that we have a tendency to descend into wonkery to defend our policy choices. It's not enough to just talk about the "free market" or "free trade." We've got to explain to people how conservative policies will positively impact their lives in a concrete way. Does it help them get a job? Keep their children out of debt? Stop the government from wasting their tax dollars? We've got to really break it down so the average person can understand exactly why we're doing what we're doing and how it helps them.

7) We will never control spending unless we change the system. Our current system is geared to politically reward spending and punish fiscal responsibility. We can make some progress under the current system, but ultimately, unless we change things with some sort of balanced budget amendment, tax limitation amendment, term limits and other structural changes, this country is likely to continue overspending until we get into a debt-driven crisis so big that both parties can't afford to continue to ignore it.

8) You've got to believe in your heart that Americans want responsible government. Some people will tell you that there are more takers than producers in America and so it's futile to fight for small government. However, if that's true, then both political parties are just battling to become captain of the Titanic. If we give up on small government and fiscal conservatism, then we're giving up on America. Don't give up on our country by giving up responsible government.

9) We don't need new laws; we need reform. If we didn't pass a single new law in the next decade and merely reformed or jettisoned old laws instead, we'd be better off as a nation. We don't need new spending and new programs; we need to prune away the programs we have while cutting spending to the bone.

10) It's better to kill a bad bill than improve it. When a terrible bill comes up, there's always a debate: is it better to try to kill it outright and perhaps fail or to cooperate in an effort to make it marginally better? The problem with cooperating to pass a horrible bill is that even if it's improved, you've still helped to pass a bad bill that you'll have to explain to the voters. It's better to go down fighting than to become part of the problem.