John Hanlon
|
Posted: Sep 10, 2016 12:01 AM
Share   Tweet
The opinions expressed by columnists are their own and do not necessarily represent the views of Townhall.com. 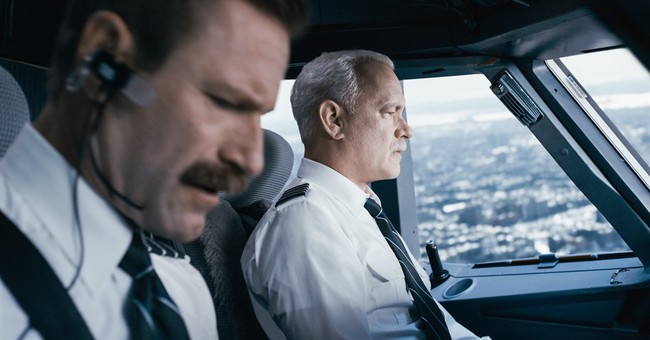 The story of Chesley 'Sully' Sullenberger could’ve been fodder for a predictable inspirational film that ends with the main character climatically saving 155 lives (including his own) onboard a disabled plane. But director Clint Eastwood isn’t known for taking that route. As a director, he’s known for asking larger questions and he’s done so in movies likeFlags of our Fathers(2006) and the controversialAmerican Sniper(2014). He’s continued that route withSully, a feature that daringly presents the Captain as an introspective man who faced off againsthis critics after his incredible act of heroism.

Tom Hanks stars as the title character, a pilot who faced the toughest 208 seconds of his life on January 15th, 2009. In less than three and a half minutes, the plane he was piloting was struck by a group of birds who paralyzed the vessel. Alongside his loyal co-pilot Jeff Skiles (Aaron Eckhart), Sully made an intense water landing on the Hudson River. The passengers were all safe but Sully’s reputation wasn’t.

As the film explores, Sully’s choices that day were intensely scrutinized by investigators, insuranceofficials and bureaucrats.

After a brief opening dream sequence, the movie shows  Sully’s journey after the dramatic landing — flashbacks later show the events of the flight — as he faces these questioners.

In his methodical story, Eastwood focuses on the facts of the case. This is a serious film about the investigation and there’s barely an extraneous moment in it.

Instead of sentimentality or schmaltz, the film offers a sturdy performance from two-time Oscar winner Hanks who quietly conveys the emotions of the even-keeled captain. Here, Hanks is is tasked with bringing to life a captain we thought we knew. In the media, Sully was often simply portrayed as a resolute hero. In the story, we watch Sully as an introspective pilot who couldn’t help relieving those 208 seconds. Even as he was publicly adamant that he did the right thing, the captain was constantly re-evaluating and reassessing his actions in private.

The screenplay was written by Todd Komarnicki and adapted from the bookHighest Duty(co-written by Chesley Sullenberger and Jeffrey Zaslow) but the story never feels like a simplistic tribute to the captain. This is a movie that is more interested in offering a complete portrait of the captain and the investigation than it is in simply offering praise for his actions. With that in mind, Laura Linney is given limited screen time as Lorraine, Sully’s wife who kept him grounded during this difficult period.

There are two major settings in this film. There are several scenes that take place in the cold outside where Sully walks and talks privately with Skiles. Then there are scenes inside — in tight-quartered investigation rooms and conference areas — where there’s plenty of heat but little warmth exhibited by cynical investigators.

The dichotomy of these settings is similar to the dichotomy of how Sully was viewed at the time. By the outside world, Sully was a hero to be revered, applauded and respected.  To the investigators (looking for weaknesses in his story), Sully was a target to be questioned, scrutinized and criticized. Both perspectives are portrayed here with the captain caught in the middle of the fracas.

Viewers can make up their minds onSully but Eastwood offers here a fuller glimpse of the captain than what we’ve seen before.  It’s a telling and daring look at a sturdy captain who faced some of the greatest criticisms of his characteraftera daring act of bravery.

Looking for more movies about inspirational figures? Clickhere for a list of10 movies about American patriots.

FBI's Mar-a-Lago Ransacking Takes Another Irresponsible Turn
Townhall
'The Atlantic is bad.' RedSteeze takes The Atlantic APART for a plethora of crap articles (attacking the Rosary?) in BRUTAL thread
Twitchy
Ron DeSantis Rally in Arizona Was a Barn Burner
Redstate
Is the Transgender Cult in Trouble Now?
PJ Media