John Hanlon
|
Posted: Feb 19, 2016 10:56 AM
Share   Tweet
The opinions expressed by columnists are their own and do not necessarily represent the views of Townhall.com. 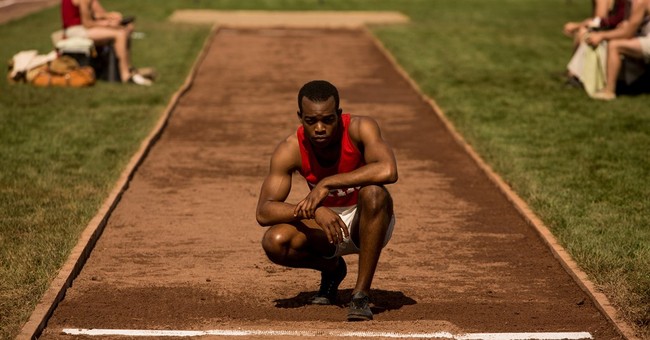 It would be hard to manufacture a noteworthy biopic of Jesse Owens. Owens was a remarkable athlete who managed to succeed in a nation that was often blinded by race and he managed to win Olympic gold in a nation that was blinded by hatred. His greatest achievement wasn’t winning four gold medals as a track and field athlete for the U.S. Olympic team in 1936. It was inspiring a nation and showing people how important it was to look past a person’s skin color or religion.

Despite struggling to stay on track at times, Race — the latest film about the athlete — is a commendable achievement that will hopefully inspire youngsters to learn more about Owens.

Instead of offering a complete glimpse at the life of Owens (a difficult task to be sure), this film focuses on the future Olympian when he’s beginning his professional training. The feature opens in the fall of 1933, shortly before he became a student at Ohio State University. When Owens (a well-chosen Stephan James) first meets the university’s track coach Larry Snyder (Jason Sudeikis, doing a solid job here in a serious role), the duo both seem to know that Owens has the natural talents to become an Olympian competitor.

The bigger question though is if the United States will want to send athletes to the 1936 Olympics in Berlin. Hitler (Adrian Zwicker), who is a silent supporting character here, has become the Chancellor of Germany and it’s becoming more and more obvious what he wants to do in power.

The film nicely balances Owens’ training — which is oftentimes more psychological than physical —with the fraught political situation that the U.S. Olympic Committee is facing. The committee has to decide whether or not to compete in the Olympics with committee members Jeremiah Mahoney (William Hurt) and Avery Brundage (Jeremy Irons) arguing on different sides. The debate is laid out as one between “heart” (shouldn’t the Olympians have a chance to soar in this international competition?) and “conscience” (can the U.S., in good conscience, go in and support the Nazi-led Olympics?).

Because Owens’ achievements are directly tied into the controversial Olympics, the film spends ample time showing the political debates that surrounded those games. When the games eventually begin (halfway through the picture), much of the supporting focus here is on how the Nazis want to use the Olympics as a propaganda victory with Joseph Goebells (Barnaby Metschurat) — the German minister of propaganda —doing his best to keep Jewish athletes from competing, and Nazi documentarian Leni Riefenstahl capturing the events on film for Hitler.

The feature sometimes stumbles with unnecessary storylines, including Owens’ dating life. There are also times when director Stephen Hopkins’ vision lacks the power to truly make this inspiring story stand out. There are missed opportunities here for soaring rhetoric and passionate discussion and Hopkins too often settles for mundane chatter.

Race does deserve great credit for what it achieves in doing though. This is a movie that capably captures the times that Owens was living in and the many obstacles he faced both in the United States (where Owens was derided for his skin color) and in Germany, where the Nazis were beginning to show the breadth of their hatred.

When Goebbels chillingly states “Don’t worry about the Jews. They’re on their way out,” the film captures where the Nazi thinking was leading and how Owens — through his strength and determination — was able to defy the Nazi’s hatred and show what a great athlete and figure he truly was.