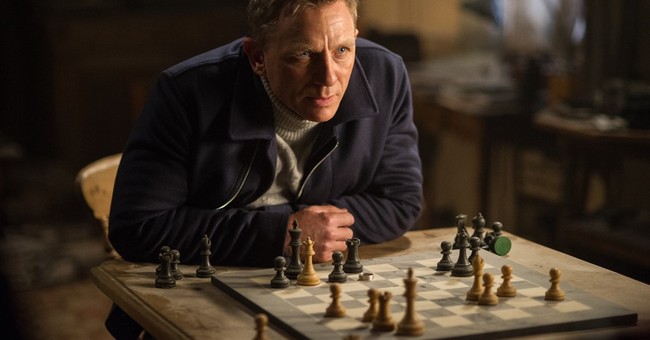 In the last few years, there have been dozens of films that speak to the dangers of living in a surveillance state. From Captain America: The Winter Soldier to Good Kill (which addressed the ethics of drone strikes), the topic of spying — and whether or not there should be limits to governments’ use of mass surveillance — has been a hot political topic on the big screen.

Spectre, Daniel Craig’s fourth film as James Bond, continues that trend by showing secret agent Bond struggling in an age where drones are seen as a suitable replacement to agents on the ground.

Bond is an old-fashioned agent. He believes that spy-work should be left to the officers who are willing to risk their lives on the ground for the mission. After Bond lost his mentor in Skyfall, the series' previous entry, he's struggling with moving forward when he realizes how out-of-date he seems to the young government hotshots.

To C. (Andrew Scott), a politician in the British government, Bond’s methods seem as archaic as the horse and buggy.

Considering the damage Bond leaves on an undercover mission to Mexico City in the film's truly great opening sequence, C. senses the opportunity to end the double-0 program for good. He wants to earn international support to develop a worldwide surveillance network that would replace putting agents on the ground. “We watch everyone,” he says slyly when asked about the breadth of the program.

In the past, many Bond films have featured timely topics that seem to be — in the immortal words of Law of Order — “ripped from the headlines.” This one follows that tradition ably featuring topics that our political leaders are currently struggling with.

For fans though, it’s hard not to be disappointed that Spectre — while commendable as a James Bond film — never hits the dramatic high notes that Skyfall did in 2012. That film seemed to take the story and the action to a higher level, peaking with a major emotional climax. After the opening scene of Spectre, the rest of the film seems to rely on the complacency of being a James Bond film.

Director Sam Mendes again brings a powerful technical skill to the action sequences, especially the opening scene, but the story isn’t as memorable as it could’ve been. The film features some of the classic elements of James Bond films, including a few humorous scenes, several appealing love interests (played here by Léa Seydoux and the underutilized Monica Bellucci) and a dramatic bureaucrat who clashes with Bond (played with great affection by Ralph Fiennes). There’s also a strong henchman (Dave Bautista) and a mysterious villain (Christoph Waltz). Even with these elements though, the film never takes a real advantage of any of them, especially not the main villain.

There have been rumors of Waltz’s role in the movie here for years so it’s hard not to go into a movie like this with high expectations. In the past decade, Waltz has established himself as a great character actor and one that could serve as one of Bond’s best foils. Instead, his underwritten role makes this Bond film feel lacking. Some of the greatest Bond villains have featured adversaries who are as memorable as Bond himself. Waltz falls short in that regard. There’s a lot of buildup to his character’s revelations but the reveals themselves lack the punch they should.

What Spectre should be remembered for is its topical subject and how it explored that subject in a strong and valuable way considering today’s political climate. “A terrible event can lead to something wonderful,” Waltz’s character notes regarding the growth of surveillance in an unsafe world. It's a conversation that works really well but one wishes that the film's other elements would've worked as well as its subject matter.