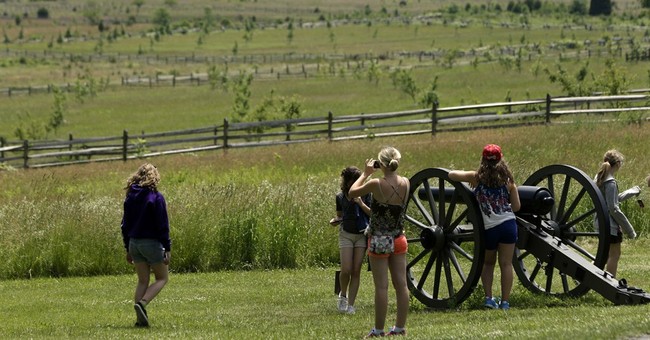 “The more I study the war… the less I understand it,” director Ron Maxwell noted in a recent interview about his latest film, Copperhead. The noted filmmaker -- who previously helmed Gettysburg (1993) and Gods and Generals (2003) -- explores the battle from a unique viewpoint in his new drama.

Copperhead tells the story of Abner Beech (Billy Campbell), a Northern farmer who opposes slavery but also believes that many of President Abraham Lincoln’s actions during the war are blatantly unconstitutional. A fierce advocate for peace and the Constitution, Abner faces opposition and threats from his pro-war neighbors, who fully support the 16th president’s efforts.

Based on the novel by Harold Frederic, the story focuses on Abner and his small upstate New York community while the Civil War wages hundreds of miles away.

In an interview I conducted with Maxwell, he noted that he’s “acquired an appetite for Civil War fiction” over the years and that the characters in this story, although fictional, are reacting to actual events. “The events they talk about—the events that happened in 1862 that are historical -- really happened,” he said. Maxwell later added that Frederic presumably saw events similar to those he wrote about as a young person growing up during the war.

Many people, whose views are comparable to Beech’s own, did exist. As the New York Timesnoted, the term copperhead was -- during the Civil War -- a well-known and derogatory nickname for Peace Democrats, a group of individuals who criticized the way the president prosecuted the war and the controversial -- and arguably unconstitutional – decisions he made.

Unlike many other war films we’ve seen, Maxwell chose to make this film not about soldiers themselves -- but about the people they leave behind. He said, “In a normal war movie…the camera goes with them [the soldiers] to the front lines.” It never does here. Despite the fact that several characters go off to battle, Maxwell’s camera also stays behind, driving home the point that when some go to war, others are left to take care of their families and their communities.

Although the story is set entirely during the Civil War, Maxwell noted the relevancy of this situation today. “You can’t help looking at a movie like this and feeling for the families that are at home,” he said referring to those who are left behind when soldiers head over to fight overseas.

Some will inevitably compare Beech to those who have opposed contemporary conflicts like the wars in Vietnam, Afghanistan and Iraq. Beech was an anti-war citizen whose feelings about the war were well-known but Maxwell said comparing him to some, for instance, who opposed the Vietnam War would be wrong. He noted that some anti-war activists went over the line taking photos with our opponents during that war, something he said is akin to “Abner Beech… going down to Richmond and getting his photograph taken with the leaders of the Confederacy.”

And Maxwell noted that Beech and those who stood beside him may have firmly believed in their cause but their values are not well-regarded by historians or by the general public.

“The Copperheads were not vindicated,” Maxwell said. “They were on the wrong side of history.”

What to Expect From the First Durham Probe Trial
Mia Cathell
Rubio Forces NIH to Admit There’s No Conclusive Data on the Impact of Puberty Blockers on Children
Madeline Leesman
College Professor Makes Wild Claim About How Many People Are Killed By White Supremacists
Julio Rosas
Here Are the 11 Senators Who Voted Against Another Unaccountable $40B for Ukraine
Spencer Brown
After Backlash, NJ School Officials Dig Their Heels in on New Sex Ed Standards